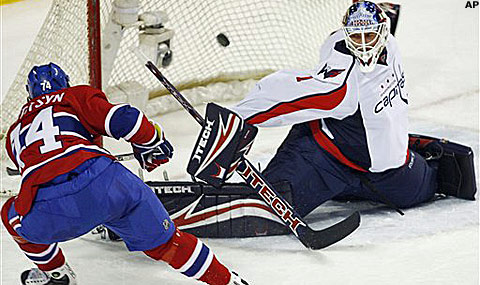 Call it a roll the Habs are on! The Canadiens are emptying the doubters bandwagon one game at a time.

The Canadiens, on a three game winning streak, have started off the second half in style. After beating the Devils in an inspiring comeback win last Thursday, the boys made sure to remain focused as the Capitals were also one of the hotter teams in the league.

Beating Washington often means shutting down Alex Ovechkin, and the duo of Andrei Markov and Mike Komisarek, with the help of a crew of red, white, and blue hardhats managed the trick. With Washington behind by three goals, Capitals coach Bruce Boudreau attempted to double shift Ovechkin starting in the second period to little avail.

Ovechkin was doubtlessly on a mission tonight, as he always is when playing against his buddy Markov, but was derailed at every opportunity. Still managing 4 shots on goal, Ovechkin was tireless but shutdown. He had four blocked shots and fired another three wide, and you could tell the Habs were getting under his skin.

Josh Gorges, who played his best game as a Hab tonight, was also a thorn in Ovie's side.

It was simply a beautiful game to watch - hockey as it should be played.

It was like a European breed of firewagon hockey!

For the Canadiens, their Alex, as in Kovalev, was equally enflammed. Kovalev was an artist with the puck tonight, creating the types of scoring opportunities the likes of have rarely been seen in Montreal since the heyday of Guy Lafleur.

(Oddly, it was Boudreau who kneed Lafleur, while with Hartford in 1980, forever robbing the Flower of that split second quickness that made him so dominant.)

The Canadiens, as a whole, did just about everything you can ask of a team in winning.

They were relentless in their puck pursuit all game. They skated hard and hit everything in sight. They backchecked with a zealot's passion. They charged the opposing goal like rabid dogs.

Montreal were impressive in every step of their execution in this one.

Although they surrendered 35 shots on goal, they hit for a total of 40. The Caps had some great chances to score once the game opened up, but a good 25 of their chances were of the perimeter variety.

Cristobal Huet was a story by himself in this one. Rarely this season have I seen him so in command of his lateral movements, his rebound control, and his poise in traffic. While his defenseman enabled him good vision, Huet was absolutely sparkling on three occasions, and had the Capitals shooters shaking their heads.

While the line of Kovalev, Plekanec and Andrei Kostitsyn have had better games statistically, they were just unchained against Washington. All game long, their freewheeling passing plays augered the Capitals defense into chipped ice.

All four lines were triggers offensively. Both Steve Begin and Guillaume Latendresse outraced Caps defenders to nullify offsides. Begin's sprint led to Koivu's goal, and it pretty well sealed the game early on.

Another story in this one was the continued progression of Sergei Kostitsyn. It's funny, but the more we see of this kid, the more we realize how well rounded his game is. At 6', 190 lbs, he's not afraid to get his face wrinkled. There might be a touch of Dale Hunter in his game, as he spares no one his exhuberance in battles. Hunter was his coach with the London Knights, and it looks as though the younger Kostitsyn has learned his game in part.

After hip checking a Bruins player last Tuesday and getting into a scruff, Kostitsyn recklessly hit a Caps forward laterally, causing what looked to be an unintentional knee on knee hit. Called for tripping on the play, he pounced out of the box to speed into the mix of a Tomas Plekanec breakaway to score the Habs second goal. That he made it a 2 on 0 rush while the Canadiens were still on the penalty kill took savvy and guts. He doesn't choose his targets either it seems. What he doing throwing a shoulder into Donald Brashear deep in the Canadiens end later in the game, I do not know. But I sure liked it.

Sergei was drafted two years and 189 positions behind his older brother Andrei, who is quickly becoming a star player. Andrei played 180 AHL games before becoming an NHL regular. It's taken Sergei all of 22 games to reach the NHL.

Often when I watch the exploits of Ovechkin, Kovalchuk, Crosby, and Lecavalier, I get envious that they are not in Habs jersey.

Watching the Kostitsyn's, and their crew play like they did tonight, makes me a whole lot less jealous.

I'm often cautious in my analysis of this years team, mostly due to the scars from last season remaining fresh throughout this year. I've been careful, remembering that, like 2007, anything can happen to upset a season. I ws thinking that if it can happen to last season's seemingly good team, then it can occur again.

I'm done with that!

For a little fun....here's a pic of the buddies mentioned above. Now....what to make of it? 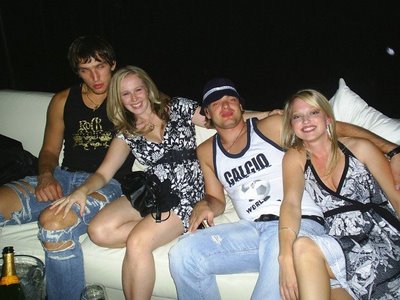