Share All sharing options for: Badger's Coach Describes McDonagh As A Komisarek Clone 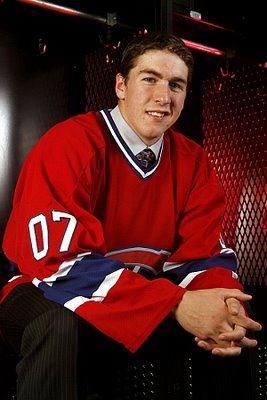 Robert L Note: I read this article authored by La Presse's Mathias Brunet when it was posted at Habs World two days ago. Even with the Habs great win last night, I could not get McDonagh out of my head today. I just had to share it so here is the transcription for all the non francophone speaking readers. Sounds like the kid has a ton of promise.

The Canadiens first choice in the 2007 Entry Draft, defeneseman Ryan McDonagh, is said to be a Mike Komisarek clone, of sorts.

It's a stunning statement to make given that Komisarek is right handed and McDonagh left handed and presently 30 pounds lighter.

Since the statement comes from someone who ought to know, University of Wisconsin Badgers coach Mike Eaves, a man who followed Komisarek's progress throughout the American National Junior ranks, it must be taken seriously.

"I'm often asked if he compares to Ryan Suter (Nashville Predators first rounder in 2003), but I'd actually say that he reminds me more of a player you know well in Montreal, Mike Komisarek", eaves admitted during a phone interview with La Presse. 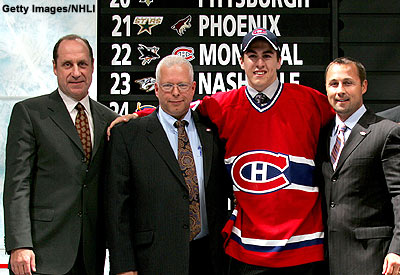 McDonagh isn't the type of player who rushes rink length with the puck. He's not a typical offensive defenseman. But the way in which he defends in his own end, his positioning, his dedication, his strength, his first pass from his zone and especially his ability to throw out a punishing bodycheck all remind me of Komisarek. I know that Komisarek is more imposing physically, but McDonagh, at 205 pounds, is already mature physically and you'd be surprised how solid he is on his skates. He loves to hit, you're going to see."

Eaves, a former NHL forward with the North Stars and Flames wasn't born yesterday. He's led the American National Junior team to it's one and only gold medal in 2004. Two years later he won the NCAA Championship with Wisconsin. Since he accepted the head coaching job with the Badgers in 2002, nine of his players have made it to the NHL, including Suter, Joe Pavelski, Jack Skille, Rene Bourque and Tom Gilbert - all rising stars.

Even though he is still only 18, McDonagh is a rock on defense for the Badgers. He has amassed 12 points, including five goals, in 26 games, with a plus 8 ranking, which is third best on the team and just behind defensive partner Jamie McBain, a second round pick of the Carolina Hurricanes two seasons ago. 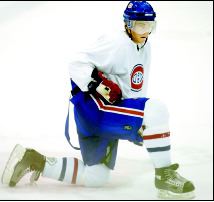 "Ryan has been good, in fact very good for us since the start of the year", says the coach. "the difference in calibre between high school and the collegiate ranks is enormous, but he has been able to make the adjustment while correcting his mistakes thanks to his great mobility. It's not often that we give a large amount of responsabilities to rookies, especially defenseman, but Ryan is very mature for his age and we do not hesitate to employ him on both the power play and the penalty kill, and he is among our top four defenseman. We never worry when he is on the ice, even against the oppositions best players."

Mike Eaves found himself in an uncomfortable position when McDonagh wasn't chosen for the U.S. World Junior team this past Christmas. The U.S. team's head coach John Hynes was Eaves assistant when he started his career in Wisconsin in 2002, and also when Eaves coached the World Juniors in 2004. 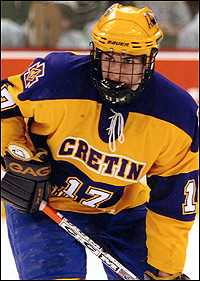 "I was a bit surprised they chose not to take McDonagh since they scouted him so closely before deciding, but I never discussed him with Hynes", Eaves said.

"I understand what position he was in, having occupied it myself. He had his own ideas and he felt the defenseman he chose could respond to the task. It would have been a great experience for Ryan, but I loved his reaction when he learned he didn't make it. He looked me right in the eyes and said that the disappointment would only make him a better player and that he would show them why he should have been there. Since then he's played even better. I find he's even more confident with the puck now. He'll be there next year, no doubt about it."

Unless, of course, he joins the Canadiens before then, as Suter did after only one year of NCAA play.

"I'd like to keep him here another year, obviously, but I'm not aware of the Canadiens intentions. We do know that their scouts are watching him closely and that they speak regularly with Mark Osiecki, who coaches our defensemen. Physically, he's ready for the pro's, but here he can develop at his own pace. The little errors he'll make won't have the big consequences attached as it would in the NHL. In Suter's case, he came and discussed it with me, saying that he just could not turn down such a sum of money. In hindsight, an extra year with us would have helped him. The canadiens will make the right decision in the best interest of those concerned."

Here is a piece that the Montreal Gazette ran on McDonagh back on July 12, 2007, and the Hockey Future feature interview with him before being drated by the Canadiens that ran on June 3, 2007. Don't miss Matt Godbout's Habs World Interview with McDonagh.