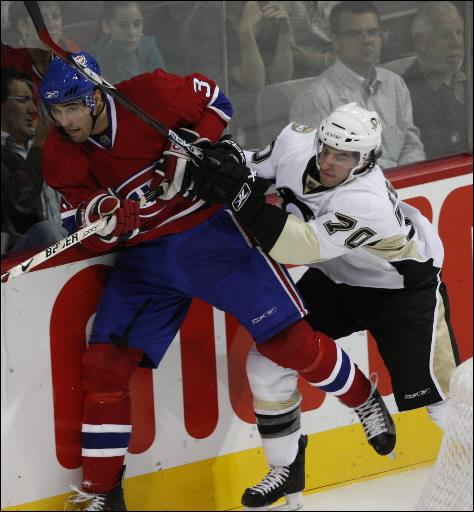 There's nothing like an over the top headline to set the tone for some happy posting for a change.

Yes, plan the parade, but don't rush or break a sweat because it's still a good few years away. The big positive of this skid halting win over the Bruins was the play of the kids who lead the way.

Carey Price looked far more in control and relaxed than in recent outings.

Chris Higgins was a whirling dervish, creating and finishing plays better than he has all season. This is what leadership does. With a little luck, Higgins would have 20 goals by now.

Guillaume Latendresse, fourth on the team in goals seems to have found his groove playing alongside Kyle Chipchura, who deserves the accolades of an entire piece to sum up what he is and does.

Tomas Plekanec, Andrei Kostitsyn, and Maxim Lapierre round out a diverse group of youngsters whose hunger tonight enabled the Canadiens to quench victory and turn the tide.

Oddly, and in contrast to what I said yesterday about the minimal chances of either Lapierre or Ryan O' Byrne having any type of immediate or long standing impact, Rhino Burn played a solid game on D and notched two assists for his effort. 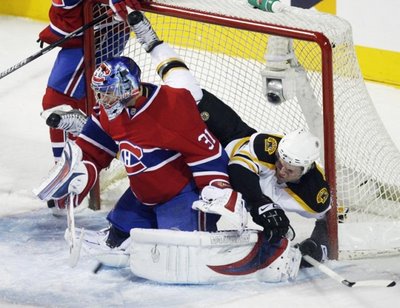 This was an unexpected happening, to be sure. What's even more surprising was how composed O' Byrne was in his NHL debut. He was so sound tonight in fact, that if this is everything he has to offer, if this game wasn't bettered all season, I would still be pencilling him into the lineup for the next 50 games or so.

Patrice Brisebois and Josh Gorges should be concerned.

A poll conducted on RDS during the game asked viewers if the time was ripe for the Canadiens to proceed with a full on youth movement, and voters were 87% in favour.

That response really threw me as I was expecting a more even split.

A regular reader of the site, who goes by the moniker "Brown Jesus" likely summed up the general feeling of Habs fans towards that goal, with an in between period e-mail that read:

"I think you've hit the nail on the head in your last two posts, Robert. This team is being built as a team and must start playing as a team. They've been missing the "Claude Lemeiux" part - a never say die attitude/energizer bunny pest approach to the game. I can't really explain it, but that kind of player serves as a catalyst to keep the team moving, that a team gels around, and maybe Lapierre can do that. The thing that I keep reminding myself is that the some of our parts still need to mature on target. Lats can be a consistent scorer. Higgins can be a solid two way player. Kostitsyn can be an offensive sparkplug. Chipchura can be a shutdown center. But all this will take time."

Brown Jesus later mentioned his impatience - something I'm sure we all feel at times, but it must be said that we are dealing with a team that is one of the youngest in the NHL. We forget that too often, in scritinizing the present tense in regards to direction.

The Canadiens are adding youth and subtracting veterans simultaneously. Brick by brick building such as this does not happen overnight. True Habs followers know that the Canadiens are drafting better than they have in twenty years. This method of cementing a rock solid foundation for the future has its ups and downs, as was testified by the team's very rough November, and we should never lose sight of it's merits in light of long term goals. 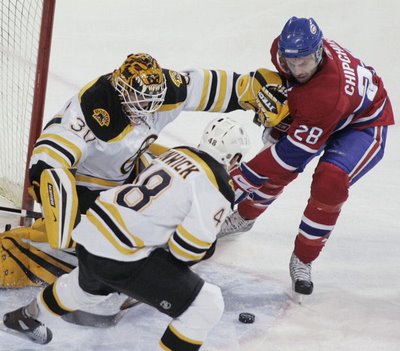 In the Habs aim to win a Stanley Cup, building from the net out with youth in goal and on defense is the smartest route to becoming consistent contenders.

Canadiens GM Bob Gainey is unlikely to cave into fans and media demands that the team kick start the ultimate goal by sacrificicing the big picture for short term rewards. It's just nit worth the gamble.

Which NHL club would you rather Gainey attempt to emulate - the Red Wings or the Leafs?
Grooming the younger players takes time and patience.

The struggles the team is currently going through are a part of the process of learning what it takes to win. All our young guys are best to learn it early in their careers rather than later.

In tonight's win, there was actual evidence of the youth maturing. After a grabbing a large first period lead, comfort and complacency compromised that lead through selfishness and indiscipline. The Habs the reversed their trend of third period crumbling by getting back to basics. They tackled their own sense of panic by concentrating on doing the little things right.

The Bruins never got back in the game - never threatened, never even got a sniff.

Robert L Note: I will not be posting over the weekend, as I will be with my daughter and her Cornwall Typhoons team at a hockey tournamant in Pembroke, Ontario until Sunday night. For those readers seeking Habs content with both a fresh and historical bent, I recommend a pair of sites that I always find entertaining and informative: Joe Pelletier's Greatest Hockey Legends and a great Habs news hub called All Habs.

You could say that Joe and I are mutual fans of each other's blogs. His is a daily must read for hockey fans with a thirst for where the game has been and is headed. There's plenty of Canadiens content, via numerous retired player profiles.

Mr. Pelletier is more than simply your average hockey blogger. He is a well known international hockey expert who has authored many books and has served as a source of reference for several hockey film projects including the 1972 Summit Series and the CBC's hockey documentaries.

I was quite honoured to be chosen in two of his five year end hockey blogging award categories.

All Habs doesn't miss a beat on Canadiens news, be it a good blog post, a National news article from coast to coast media, or happenings with the Hamilton Bulldogs. It deserves a Habs fanatics bookmark. All Habs often offers news in video form, and endeavors to make back page Habs news front page features. It bridges the gap between Habs World and Habs Inside Out quite effectively. Do yourself a favor, bookmark it also, and make it a regular stop.

For the readers who have been enjoying my chronological series of Habs goalie posts, the John Aiken entry will be a treat.

While he is one Habs goaltender you surely shouldn't remember, his story is compelling, interesting, and the stuff of fanatasy.

I urge readers to check it out for a giggle, historical insight, and a dream.