Lessons In Hockey And Class As Habs Schooled By Wings

Share All sharing options for: Lessons In Hockey And Class As Habs Schooled By Wings 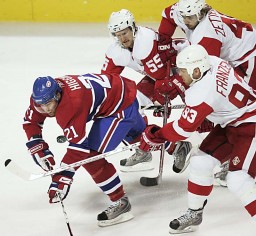 Hey, maybe if we got to see the Red Wings more often, we might recognize how hockey is supposed to be played!

This, my good friends is firewagon hockey - not played by flying Frenchmen - but by a mix of fleetfooted Russians, Finns, Swedes and you name it foreigners.

The Habs had great seats for this windburning, freewheeling display of hockey as it should be played, and as spectators received a close up lesson in how it's done.

The Canadiens have something in common with the Wings, other than red home jerseys. In addition to a similar mix of nationalities on the team, the Habs also know how to create a breeze on the ice. Although they have looked anything but fast of late, the Canadiens know how to move it - they just don't know how to use it.

Watching the blur that was Detroit tonight, I found myself asking more questions than I had answers to, starting with, and always returning to, "Why can't Montreal do that?"

For one, how is it that all Red Wings forwards can streak into the Canadiens end at breakneck speed, hang around for a scoring chance or two, and have four players back at the blueline to surround a Habs player (Ryder, no less than 3 times, Higgins as pictured above) as he stiffles himself or augers himself into the ice?

How is it that the Canadiens, speedy enough themselves, can be made to look so stiff and slow?

Why is it that the Red Wings transition game appears to be a seamless flow from zone to zone?

The answers to these and many other mind boggling questions are not rocket science, but are rather based on the simplest notion in hockey - that the puck is what moves fastest on the ice.

The Wings apply this theory to all that they do, in all three zones, all the time, at the highest speed of execution imaginable. 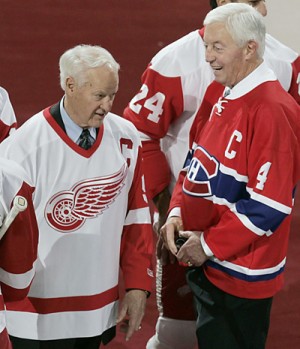 Contrary to the Habs, Detroit does not log the puck - they move it. You'll rarely see any great individual plays by Red Wings until there is one final defender to beat. They don't get fancy in their own end. The don't do it in the neutral zone. They hardly ever attempt it at the blueline. Around the net, or nearing the slot, with one player left to beat, then the bag of tricks come out.

Up to this point, Wings players carry the puck very economically. They get the puck, pass it, a stride and half later it's gone again to another player who repeats the drill. Nobody tries to squeeze between other players individually.

What helps Detroit work this, is that they never stop moving. They do not stand still, watch or wait - they create, by keeping everything moving, the puck included. Space is hence created by defenders on their heels.

When the opposition has possession of the puck, Red Wings players do not settle for tailing their coverage back to the blueline, they beat it there, often preventing the opposing player who has the puck from finding an open pass. They muffle out many threats this way, and the Habs were helpless in solving this tonight.

How Detroit plays without the puck is impressive. They do well not to waste checks when unecessary. They couldn't be bothered with hindering the path of a player without the puck for too long. They are expert in being properly positioned all the time.

They do a whole mess of other things well using fluid motion and little waste. They do not spend a lot of time gringing players down or tying them up as they burn their gas getting into position to counter the attacks first. 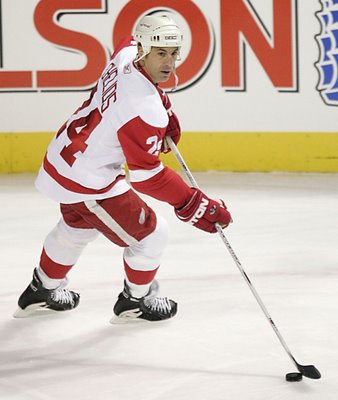 Looking at Detroit's elements, one can see comparable assets on the Habs side, some that would look perfectly suited wearing the winged wheel.

The entire Kovalev line fits the bill - or could. Both Markov and Hamrlik can play that style too. Dandeneault has been there, and it shows at times. Pieces of Koivu, Higgins, and Begin's game goes there as well, just not often enough to cry "discovery".

Montreal frustrates themselves by trying to beat defenders one on one. They can't dump and chase against a faster team. They take too many strides with the puck and get snuffed out because linemates are watching instead of moving. Pinned in their own end, they have begun to wait for breaks rather than utilizing their collective speed to force them. They skate themselves into corners because they fail to create pass options consistently. Other than a tight cycling of the puck, they are lost for plays to make except on the power play.

When coaches suggest a team wasn't working hard enough, it all starts with skating.

Montreal was guilty of that worst of flaws, when not guilty of others, and it kept them a spectator to a great game.

At times it seemed as if they would keep up, until costly errors eroded their confidence and set them reeling on their heels again.

Perhaps what Guy Carbonneau is attempting to accomplish with certain line combinations, is an evening out of skill on particular lines. That might explain Streit with Koivu and Higgins, as opposed to the slow and dragging Ryder. It could also explain why there seemed to be some complicity between Latendresse and Chipchura on Saturday - neither fleet of feets. In time, it could also reveal Hamrlik to be better partnered with Markov as well.

The lessons to be learned in tonight's game may be found by splitting the contest into separate halves - what worked up until the score was 2 -1, and what failed to after. Comparing the details may hold some clues.

It may be a good thing that the Canadiens next opponant is the Bruins - who have a habit of making the Habs look like the Red Wings on occasion. With how the Habs are doing now, every light at the end of the tunnel is feared to be an oncoming train.

A Lesson In Class

I never liked the Chris Chelios for Denis Savard trade, and I never bought the Serge Savard argument about Chelios' knees being a question. He was moved because president Ron Corey didn't like the badass Chelios as captain. But that's a story agonized and unresolvable.

Habs fans evidently do not, or never did feel the same way.

Chelly was part of the Canadiens celebration of Original Six rivalries prior to the puck drop, and Chelios, the only man on the ice (where the heck were Frank and Pete?) to have played on both sides got great love from the packed house.

Chelios seemed extremely touched by the ovation in what was perhaps his last appearance in Montreal. He must have been just beside himself, getting louder cheers than both Gordie Howe and Jean Beliveau.

Not that I have any qualms with his inclusion, but Chelios as a Red Wing was never a part of any Original Six rivalry, or any other. Still, he deserved to be standing amongst the greats he was included with.

After the game, as the announced third star, Chelios was given the opportunity to send the love right back, and he surprised with a class gesture rarely seen. Rather than the usual spin, twirl and wave to the crowd, Chelios skated some lengths, looking into the masses with a genuine appreation in his own. He took his time about it too.

It was as if he were saying, "I remember you folks, and thanks for everything you've helped me achieve to get here today."

That was class you cannot teach - but it can be learned.

I hope many Canadiens players took note that when you bust your ass for this team and its fans, it is never forgotten.