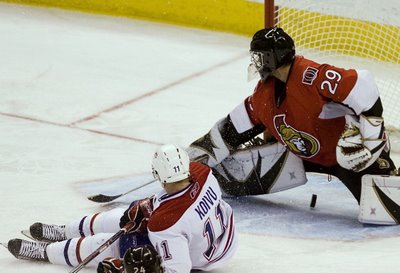 Robert L Note: If you thought Guy Lafleur's "four fourth lines" quote about the Canadiens from two weeks ago was inflammatory, his December 16th column in Le Journal De Montreal about Saku Koivu needing a change of scenery is outright journalistic dynamite.

This column really snuck under the radar, as it was published on Sunday, after the Canadiens had won a pair of games and seemed to see a light at the end of the tunnel of an elongated losing streak. That Koivu scored 2 goals while Lafleur was likely writing this is perversely ironic. Read on.

Here is the translation.

Could Bob Gainey have a surprise Christmas gift for us in the coming days? That is the question many are asking while the Canadiens pick their collective snots sliding down in the standings while offering uninspired performances at the Bell Centre.

For certain, Habs fans would welcome with open arms a trade that is badly needed by the team. Rumours have been persistant that Saku Koivu, and of course Michael Ryder, are soon destined to pursue their career paths elsewhere. Scenarios abound that players such as Patrick Marleau and Steve Bernier of the San Jose Sharks may be involved in such a mega deal.

Until the contrary is proven, all this remains speculation too good to be true. In the best interest of the Canadiens players involved, I hope such a transaction takes place, but i have learned with experience not to confuse my dreams for reality.

I recognize that Koivu has done everything for the Canadiens throughout his career. He has worked hard and given to the best of of his capabilities to the team, but it just might be time he needs a change of scenery. For a few weeks now, he seems lost on the ice and has been having all kinds of troubles scoring and offering solid shifts.

Contrary to the opinions of others, I do not believe that he is finished player. Perhaps he is just being dragged down by a lack of interest and nonchalance has overtaken his game.

He hardly seems to be enjoying himself during games and his effort shows a certain complacency. Before our eyes, we are witnessing a captain who'se been beaten down, and is no longer able to help the team as he should be able to. 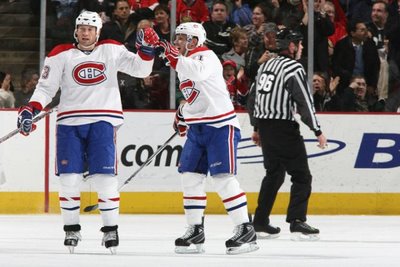 It might only be a perception on my part, but it often happens that a player needs a change of scenery to rejuvenate his desire.

I have long stated that the Candiens have been wrong in attempting to build a team around Koivu. I didn't make up my mind yesterday. When Rejean Houle was GM of the Canadiens, I assured him that Koivu was not a franchise player and that we could not build the core of the team around him.

At the time, Koivu was often injured and was missing a large majority of games. Hence, as I did then, I still do not believe he has the neccessary tools to carry a team on his shoulders.

Despite all the respect I have for Koivu, and the compassion that his trials and health problems inspire, I believe his time is done in Montreal. Unfortunately, Stanley Cups aren't won with compassion. In all regards, and for the betterment of the team, changes need to be made. There's little meat left on the bones - time for new bones.

The same principle's apply to Michael Ryder. It's all well and good to sit him out in the press box if the team is dissatisfied with his performances, but there is a risk to negating an important cog in the teams makeup. Ryder is hardly a grinder type, and it is imperitive the a decision is made in his case: play him until he breaks loose or trade him. If it has been decided that he should sit, it surely means that there is no place for him on the team.

The Canadiens management absolutely have to move on these issues, but the truth is that it can't get any worse than it is now. When all but a few players are helping the team progress, while the remainder are going in reverse, it all adds up to a backwards destiny.

I'm not sure what the Canadiens would get in return for Koivu and Ryder, but I know one thing: better act now while they still have enough market value to offer some return. Even though the Bell Centre is packed nightly, and that attendance figures are of little worry to the owner, it is no reason to not make changes.

Changing the face of the team could breathe life into the team and enable it to rise above itself. It might just force the players to roll up their sleeves and search for that sadly lacking work ethic gone astray. Only then would we know which kind of team we have.

As it stands now, who can assure me with certainty which direction this team is going in?