Habs Near Perfect in Win Over Leafs

Share All sharing options for: Habs Near Perfect in Win Over Leafs 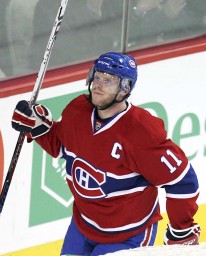 Koivu led the way tonight, pacing the Habs over the Leafs with a personal drought ending two goal performance, as his parents were in attendance at the Bell, visiting from their homeland of Finland.

So do the Habs play the Wild and brother Mikko at the Bell this year, and when?

Maybe it was the inspiration of playing before the folks that got him going, or perhaps it was the kickstart of new linemate Sergei Kostitsyn, fitting like a glove, that did the trick.

Whatever it was, the Canadiens number one line looked like a number one line for the first time in quite a while, and the credit should be spread to both players, as well as Chris Higgins for the needed thump and oomph.

The younger brother also seemed to motivate Andrei Kostitsyn to another level, and the elder turned in one of his best performances ever in a Habs uni. Should Sergei continue to have this effect on his bro and the rest of the team - and I believe he will - the landlady who billets him in Hamilton can put his room in Steeltown for rent.

More than once, I saw him behind the Habs net, throwing hits and battling for the puck. I now know what Dale Hunter, his former coach in London meant, when he stated that Kostitsyn was NHL ready in many ways.

Koivu and the Kostitsyns were merely the shinniest tips of the iceberg in this game where every player, from Carey Price and Roman Hamrlik down to Michael Ryder and Josh Gorges, looked unified, whole and focused. In short, the Habs played like a group of players all on the same page for the first time in weeks.

They were a team tonight, and they played that way amidst the pressure and fear of equalling a record losing streak at home, against its most worthy of rivals - the Toronto Maple Leafs.

Now it must be admitted that Toronto, a surging team of late that seems to have gotten it's act together, were a little tired. In the middle of an elongated road swing and travelling overnight from Atlanta, the Leafs were likely distracted from being a day away from returning home.

Whatever it was tonight, something was amiss as they lacked their usual defiance and bite when playing in Montreal.

On the coin's flipside, the Canadiens did their best not to let the Leafs grab hold of the game after they jumped out and gained their usual lead in the shots on goal margin. Our boys stuck to their guns, and their gameplan, and rarely let the Leafs get any worthy scoring chances. When they managed any pressure or deep penetration ( ! ) Carey Price was a wall.

Price might just have had his best game as Hab tonight as well. The lone goal he let in ( deflected or not ) was his lone moment of distraction.

As steady and composed as he has so far been in his rookie season, I have noticed some things that have given me concern about his game at times. I realize I am picking at straws here, but I find that too often Price relies on position and trying to be big too often, as if simply hoping to be large enough to be hit by the puck. In this game tonight, his mobility, dexterity, and lateral movements seemed more fluid and smooth - a sure sign of progression. Add in that his puck handling skills are becoming sharper with each start, and that his teammates are more keyed to expecting the unexpected in regards to feeds from their goalie, and you realize that we are witnessing a new wrinkle that will enable the Habs transition game to blossom. 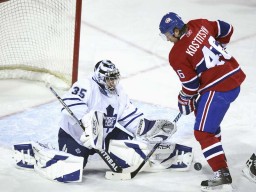 I noticed tonight that the Maple Leafs efforts at dump and chase hockey were snuffed out a half dozen times at least, and it seemed to throw them off.

Price has now beaten the Leafs in three consecutive games, progressively - a shootout win, an OT win, and now a regulation win. As Price gains familiarity with the Leafs lineup and other teams, he will become more comfortable and calm as time goes on. It is doubtful Toronto sees Cristobal Huet again this season.

The play of the Canadiens goaltender enabled everyone to play their roles without compromise in this game. The team's play may also have aided Price to be more settled and focused.

Each Hab did their job tonight - bar none. The forwards came back quickly to help out the D, and the defenseman rarely got fancy because the help was there. The forecheck was intense at times, and despite the committment across four lines to pressure the Leafs, little PP opportunities were created by it.

The line down the middle, all four centers, were the game's unsung heroes. Koivu did his offensive duty. Tomas Plekanec enabled both his wingers to score through his hard work. Kyle Chipchura broke up countless plays and rushes in all area's of the rink. Maxim Lapierre gunned at everything in sight while creating offensive out of good defense.

Credit must be handed to Toronto for not coming unglued as is their habit when losing. Credit to Montreal for not swaying from how they countered the Leafs, when Toronto did not panic. Tired as the Leafs surely were, they gave nothing to Montreal they did not earn.

I missed Thursday's Philly game, so I cannot assume that what worked well in one win lead to another. I imagine confidence has reintegrated he team's collective state of mind, and after a solid road win, it helped them in this one.

Knowing I needn't fear the brainfarts that arise from players named Bryan Smolinski and Patrice Brisebois tonight, I see this current Habs lineup, the same one I called for at training camp, as being the right lineup to move forward with. It is headed in all the right directions theoretically, with this latest instillment of youth.

All things considered, the Canadiens did not look like a team confused against the Leafs by any measure - and this opponant is usually counted upon to expose the team's biggest crevices and cracks.

A near perfect win.

Count me impressed as I declare the Habs slump officially done with.