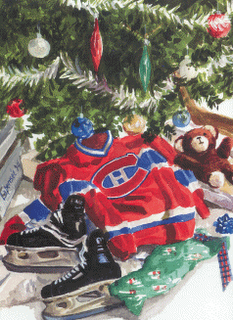 Saku Koivu: More consistant production, true appreciation for his worth, less doubt and questions, and a team future to believe in.

Alex Kovalev: Respect, a 35 goal season, motorcycle safety courses, free Cesna plane rides for fans in the off season, and the absense of Russian journalists.

Andrei Kostitsyn: A better reading of plays as they break out along the wing, a fifty point season to build upon, and his younger brother for a roommate until the end of the year.

Michael Ryder: Goalies as solid as Evgeny Mylnikov as targets, in Montreal or elsewhere.

Guillaume Latendresse: No more conspicuous press box trips on the way to a 25 goal season, and a trip to the Future Stars game at the All Star break to make up for last season's oversight.

Kyle Chipchura: Continued cohesion with Latendresse as a wingman for this solid Habs citizen.

Maxim Lapierre: Consistency, a defined role, and better luck in the offensive zone.

Tom Kostopoulos: A fight he can win by KO, distracted officials to his dirty work, and a fairer evaluation from his coach. ( Thanks - Anon )

Andrei Markov: Renewed focus, a bruise free season, and Alexander Ovechkin for a roommate to begin the next season.

Mike Komisarek: A slugfest or two to make him even more feared, the ability to perceive every opponant as the Maple Leafs, and a five year contract extension.

Roman Hamrlik: More shots on goal that find net rather than legs, a rookie that continuously progesses alongside him to further provide evidence of his worth, and wingers willing to help him out in his tasks a great deal more.

Francis Bouillon: Consistency that will enable him to remain a Hab as long as he can.

Josh Gorges: Games and icetime that boost his confidence.

Ryan O'Byrne: Experience at the NHL level and a fighting major or two when the team could use it.

Mathieu Dandeneault: A less chameleon role with a deeper definition of purpose.

Steve Begin: A full and speedy recovery that enables him to block a 100 more shots and throw a 100 more hits this season.

Bryan Smolinski: A trade to somewhere, so that the Habs media doesn't turn this good guy's one year in Montreal into his final hellish season.

Cristobal Huet: Enough games to keep him sharp and focussed while being challenged by Carey Price, a long term contract, and enough votes to reach the 2008 All Star Game.

Carey Price: A string of solid performances that allows to push Huet for all he's worth, an appearance in the Future Stars portion of the All Star Game, and a placing on the All Rookie Team at year's end.

Guy Carbonneau: Moments where he can actually relax and breathe, sprinkled with a few large margin wins.

Bob Gainey: That trade he needs to make that will prime the team and muzzle his critics, some good down time with his family, and well deserved moments of peace of mind.

To the friends made at Eyes On The Prize:

Joe Pelletier: To one of this site's best supporters - nothing less that full time renumeration for doing what he loves best.

Retro Mikey: More encounters with Habs greats and a trip to the next Habs Fan Summit.

Chuck: Lotsa great hockey books under the tree and time to tell me all about them.

Matt G and Matt M at HW: Continued success in their journalistic endeavors.

T.C. Deneault at HW: Increased recognition as one of the better Habs bloggers out there, and employment with the Gazette, which he rightfully deserves.

Topham: Continued growth with his All Habs site.

Ian Cobb: A big supporter of the Habs youth movement, may your prophecies come true...starting now!

PPP: A Leafs - Habs playoff round.

The Boys At FHF: Longevity in their field, in their hobby, and a Wayne's World like pregame show every Saturday to nationally expose their wit and wisdom - hey, four less lawyers is a good start!

Dave Stubbs: May you find a friend on the Habs as fulfilling as Sheldon Souray, continued success at HIO and the Gazette, and a CBC hot stove seat.

Red Fisher: 20 more years on the Habs beat and an apology from the Hockey Hall of Fame that renders him an honoured member and not simply an honouree.