Share All sharing options for: Devils Expose Where Habs Need Upgrading Most 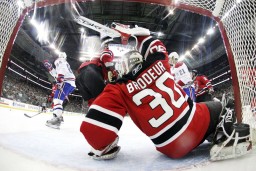 Earlier in the season, while the Canadiens were off to good and fresh start, certain games, namely those against Toronto, Ottawa, and Carolina were seen as measuring sticks for how good the Habs truly were doing. These are teams with identity written all over them, and the Habs were greatly tested when they butted heads with these well aquainted foes.

They faced another such well defined opponant in the New Jersey Devils last night, and the result was both deceiving and disappointing.

Assessing how good - or how bad - the Habs have been of late is no simple chore. After the teams surprising start to the season, which had them on a lofty precipice as high as third place overall after some wins, they have settled into being nothing more than an average .500 hockey team over the last three weeks.

Some nights, all the promise of the roster speaks of a Stanley Cup future. On other nights, reality sets in and much reassessment is needed to figured out exactly where the team is at.

Earlier this week, right before the win against Toronto, I made a note to myself to write a post entitled "Where The Habs Need Upgrading Most". The goal was to analyze in detail, what were the weaker points of the lineup, and of the team's game, that needed attention in regards to where the Habs were headed, not just immediatly, but with that silver mug big picture in mind.

As I thought out my points and took notes, I decided that I would let the notion marinade on my brain for a game or two, before committing them here.

Unsuspectedly, this loss to Jersey brought them to a head. 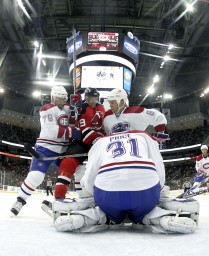 To summarize, before offering an explanation, I'll suggest that the Canadiens have a nucleus with the potential for an awesome upside, combined with, or divided by, some very ill fitting parts.

I see the team as being about three and a half players away from being a serious Stanley Cup contender.

New Jersey did well to expose the Canadiens most glaring weaknesses in this game, and the score wasn't exactly reflective of the game that was played.

The contest in and of itself was a pretty even match. The Devils, as per their norm, took advantage of four Canadiens errors to score four goals.

The Canadiens began the game exactly as mandated. Come out howling, force the Devils to take some penalties, and pounce on the opportunities offered.

As though they had something to prove to more than just themselves, the Habs did exactly as mandated, but Martin Brodeur had other ideas. To suggest he was stellar in the opening frame is obvious. Oddly, this is where the Devils won their game of patience. They play chess on an ice surface and conquer Montreal with their poise every time. 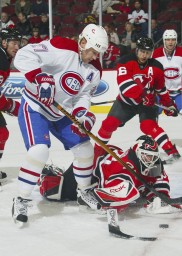 The four Habs boobs were:

Patrice Brisebois revisiting a hellish flashback of his gravest flaw - his inability to seize a pass, shoulder into it's reception at the blueline, in order to counter a check or pickoff attempt.

Mathieu Dandeneault offering himself up as a pylon without a stick during the second New Jersey goal, a Devils PP in which he did zero to negate the Devils moving the puck around.

The third and fourth boobs were unique, yet coincidental incidents, that led to two Devils PP goals, and they snuffed out all hopes for any comeback.

On the same shift, both Kyle Chipchura and Guillaume Latendresse were called for high sticking infractions worthy of 4 minutes in the box each. It was the ultimate in dubious calls. You may watch 5000 more hockey games in your lifetime and never see such a mangling of official responsability by the zebra's in charge of the game.

Simply put, and not that it affected the game's outcome, here is the explanantion of what occured.

Chipchura highsticked a Devils player in the face in the Canadiens zone. Both referees on hand missed the call, but the infraction was observed by one of the two linesman, who where positioned further away from the play - where they should be positioned, which is at the blue line.

Now a four minute call for high sticking involves two ideals. One, that it is a blatant foul. Two, that it draws blood. In either, the linesman have the power to blow the whistle as soon as the guilty team gains possession of the puck - even sooner in case of extreme injury.

Neither the referee's or linesman did so in this instance.

Hence, the play was allowed to continue up ice with the Canadiens in possession of the puck. When Latendresse accidently high sticked a Devils defender while on an offensive rush, the whisltle blew, and the referee called him for high sticking.

It did not seem that Latendresse's foul drew blood, nor did it incur to the linesman to whistle upon the Canadiens possesion in regards to the Chipchura call, which commentators said did draw blood.

In my interpretation of the rulebook, one call ought to have negated the other. Impossibly, the game's officials made three mistakes on only two infractions, and handed the Devils a 4 minute 5 on 3 powerplay.

Of course, all this is beside the point, as the Habs lost the game way before these bumblings sealed their defeat.

Where the Canadiens came up short in this shutout loss to New Jersey, was predicted by where they have been running on empty in other games. 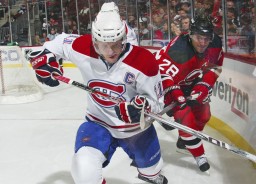 It is a not a question of player dedication, heart, focus, or committment that has been derailing the Habs of late. It is an issue of personel.

It is the reason why Bob Gainey has taken in some Bulldog's games of late.

Take a breath - I'm far from suggesting the Canadiens need to ship the whole seven off - nowhere near.

I will tackle each needed upgrade in order named.

Brisebois, simply put, is a stop gap measure until a more rounded defenseman becomes NHL ready, or the Habs pull off an upgrading trade move. In some games he has looked composed while paired with Roman Hamrlik, but such notions are deceiving as he often screws up when left to his own devices.

Grooming Josh Gorges or Ryan O'Byrne would hardly detract from the zero upside that Brisebois gives the team.

Streit and Dandeneault were each better off where they were played last season. Streit contributed more offense than Dandeneault up front, while Dandeneault wasn't as shellshocked as Streit presently is on defense. While Streit may add up powerplay numbers, he is a 5 on 5 liability on pace to challenge Sheldon Souray's minus stat from ast season.

Francis Bouillon gives all of what he has on a nightly game basis. I respect the courage and conviction he brings, but on a thinned out Habs defense, and paired so vulnerably with Streit, he is prone to his inadequacies of size and speed. Paired with another player, on a deeper dfense, he would be tolerable.

So far, Bryan Smolinski has been a giant step sideways as a Habs depth player, and is no upgrade on Radek Bonk in any area. He has been inconsistant, while being unpredictable. Playing both wing and center, on both the third and fourth lines, Smolinski has found no niche or role on the team yet that has been definable. In defensive roles at center, he has been surpassed by a rookie with a mere 20 games of experience in Chipchura. On the wing, he skates away from obvious hits. He acts like a player more concerned with his health after retirement than a veteran willing to go the lengths to win a Cup. He's a million bucks more expensive than Maxim Lapierre - but half as effective and irritating to opponants.

Saku Koivu is a difficult player to critique, as I love both the man and the player. The human being that he is, is even more beyond reproach. Last night, I watched Saku make a half dozen premature passes to wingers not yet in the open. Koivu wants to win so badly. I find that he often tries to play quicker and bigger than he is - his heart not recognizing his talents limitations. The Devils keyed their best center against Plekanec, and still Koivu was squeezed in a vice - like a blanket. He's a keeper for the Habs until the day he hangs them up, but as a centerman, the opportunities he must create for his wingers must be more fluid and precise.

Tomas Plekanec is the most difficult talent to assess. The Devils shut him down by systematically throwing two forwards at him all game. Other teams will learn to snuff him out similarly. Obviously, not every team has a John Madden capable of reading the Habs rush, but this is the type of countering he can expect come playoff time. Last night, Plekanec did little more than dump pucks into safer area's, and the tight coverage nulified the effectiveness of his line. He's young enough and smart enough to learn how to adapt to it. Only time and experience will show what he is truly made of.

Taken in context, the Canadiens upward moves are in a stanglehold position. Trades and upgrades simply do not occur as often as they once did. The new NHL's salary cap is both a vice and a noose, and I hope Gainey's trademark "wait and see" approach is sound when it comes to risking change.

While the need for certain upgrades may seem exposed, 57 games remain in the season, panicking now would be irrational, given the variables that lie ahead.

Take a deep breath, Habs fans, and give your own observations a little more time.