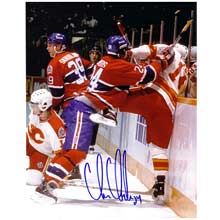 From the pages of today's Le Journal De Montreal

Former Canadiens defenseman Chris Chelios does not look like he is ready to ponder retirement. To see him in action during the Red Wings practice at the Verdun Auditorium yesterday, he surely did not look to be 45 years old.

When asked if this could be his final trip to the city which launched his career, his reply was, "I hope not."

Chelios, who turns 46 on January 25th and started his career in 1983-84 with the Habs, attributes his longevity to several factors.

"Not changing teams often helps, as does playing only for good ones. I was also lucky enough to have never suffered any serious injuries."

The fountain of youth that is Chelios dreams of wrapping up his career by playing with his 18 year old son Dean, a forward with the junior team in Cedar Rapids, Iowa.

Chelios remains realistic, however in saying "It's not certain that he'll be an NHL player. Even then, that day could be five years away. He's just beginning his first junior season."

Chelios teases that "If he's not good enough for the NHL, we'll have to accompish this in a lesser league, like Gordie Howe did with his sons." 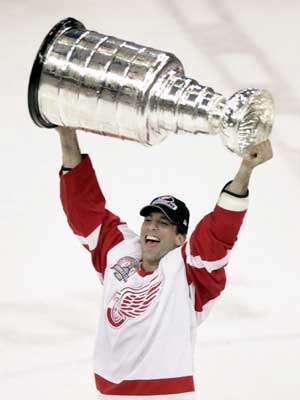 Howe teamed with his boys, Mark and Marty, with WHA Houston Aero's in the mid 1970's.

Still after so many years, Chelios feels a certain sensation playing against his former team.

"Of my years in Montreal, what I cherish most is the Stanley Cup win in 1986, the parade down Ste. Catherines, with millions of enthusiastic fans."

He made note of his initial NHL steps alongside a Hall Of Famer.

"In Larry Robinson, I had the cream of the crop as a role model. I always said that my years with the Canadiens were the equivallent of graduating Harvard with a diploma in hand."

Of all his career achievements, Chelios admitted that one particular thrill has passed him by - that of not having scored a hat trick. 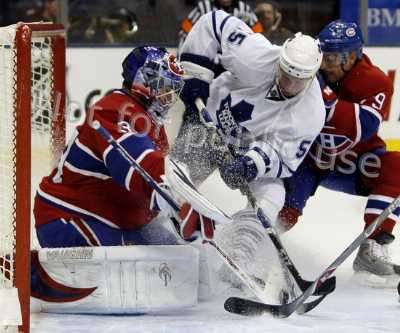 Speaking of the Red Wings, Chelios suggested that it has been Scotty Bowman's imprint upon the team that has kept it successful.

"He brought so much to the organization at every level, particularly in terms of drafting and competance in the hockey operations.

Wings coach Mike Babcock adds that Detroit has a recipe for success that is unshakable.

"We have been able to rebuild the team while maintaining a high level quality thanks to a good amalgam of veterans and young players.In today's NHL, a team cannot keep every one of it's pillars because of the salary cap. Teams have to be prepared for regular turnover, in addition to having quality drafts."

Babcock also spoke of Canadiens rookie Carey Price, of whom he predicted a long career.

"From what I have seen of him so far, I have been impressed by his calm nature, his fluid style and his size, one which allows him to greatly cover his net."