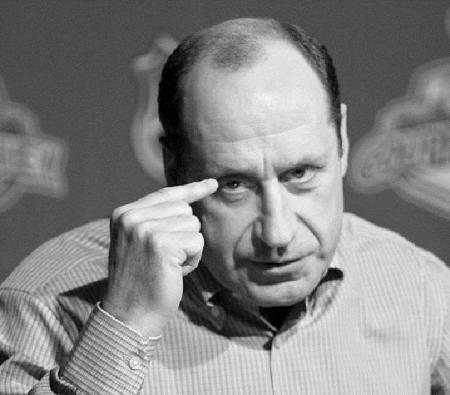 Discussing the Canadiens hayride to hell with my neighbourhood grocer Bernie just a few hours ago, he tossed this gem at me.

"Did you hear the one about Koivu and Ryder for Marleau?"

"Rumours, schrumours!", came the usual reply. "Did you hear the one about the Kostitsyns brothers, Dandeneault, and a pick for Lecavalier. They're calling it the picking a dandy pair of tits trade!"

"As real as anything I could make up on the spot!"

And so it goes, in what is fast becoming a Habs soap opera of twisted realities and self mocking fan humour.

Figuring out just what is the matter with our Canadiens right now is perplexing to extremes.

After any given game, new uglies rear their pimpled blackheads, and fans start scratching their noggings again. The fresh puss of newly squeezed zits reveal another hole in the Habs gameplan, and we start feeling itchy for solutions again.

Lately, the great Jean Beliveau threw his coin into the fountain by declaring that it is up to the veterans to lead the way. Le Gros Bill's opinion always has merit, but I had to ask myself exactly who would he be singling out.

Obviously, there's captain Koivu, and surely Cup winners such as Kovalev and Dandeneault, and more than likely the teams highest salaried player, Andrei Markov. It's the understatement of the century to note that these boys are a far cry from Jean's era when over a dozen multi Cup winners annually helped groom the one or two new greenhorns into the winning ways of the team.

The comparison, and hence its intented insinuation, miss the mark by miles.

Case in point - how does one veteran Bryan Smolinski, before being injured, help a youngster such as Kyle Chipchura along when the rookie has outplayed him so far this season?

Does Dandeneault's word carry weight, when he is being played where his experience was not garnered?

I hate to say it, but maybe Guy Lafleur's larkish dart of a quote had more bullseye in its intended aim.

The Canadiens are a team devoid of front line fury capable of backing defenses up with regularity. The teams successes ( loosely termed ) so far, including last season's, have been built upon a core group of hard working forwards, whose job it is to lure the opposition into penalties, so that a killer PP unit can take advantage.

Stats abound pertaining to any team's record in a myriad of scenarios, but few break wins down in a "when scoring 2 or more powerplay goals" category.

Given that this has more or less been the Habs identity for going on two seasons, it is a connundrum as to why they cannot translate this success to other areas of the game. It is outright baffling that there can be so many good offensive elements to a team that when added up tally less than the sum of their parts.

You'd think the equation would make some sense, but it doesn't.

We see the talent and varying skills in players such as Higgins, Latendresse, Kostitsyn, Plekanec, and others. We are allowed glimpses of their upside potential from time to time, and it too often feels like a tease.

Start a conversation about trading any of them, and the answer is a quick and resounding "No"! But for the team to aquire what it needs does require the team to sacrifice. Still, fans and press and management cannot seem to agree or unite in thinking that certain young players are expendable.

I ponder the notion myself, while names like Leclair, Chelios, and Schneider make me shudder as I dare look into the crystal ball.

Then I think of the Chouinard's and Gilbert Dionne's, and I pin the tail on the halucinogenic donkey that is predicating the future.

It's a whole lot like drafting and pointing out late bloomers. With Montreal's hockey media, erring is almost suicidal. 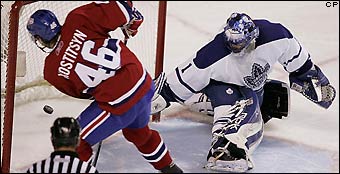 Michael Ryder, traded away, may be the next guesswork Leclair or Dionne. He could turn out to be either. Insert your own favorite player here and you'll feel Bob Gainey's shoes tightening around your feet.

What it all amounts to is that GM Gainey, us fans, and our dreaded hellish media have all identified the teams biggest ills at one time or another - the need for that one player who makes all these talented parts fit.

At different times, that name has been Briere, Marleau, Shanahan, Smyth, or Lecavalier - none of them far off the mark. (Incidentally, Shanahan was inches from Habdom, had Rejean Houle thrown in Valeri Bure with Pierre Turgeon to aquire him from the Whalers).

The unwillingness, or hesitance to package youth and prospects for immediate gain right now, surely must be what creases Gainey's frown these days. Contrary to Beliveau's cry for veterans to lead, it is actually the Habs youth who are learning about how to win, by losing, that is the team, and its players, most valuable long term lessons.

In that light, time and patience versus panic and stress, are Gainey's pro and cons to juggle and judge.

Given the context of repercussions, I wouldn't want to be him deciding.

The Canadiens, with Gainey at the helm, have drafted smartly and wisely since he has taken on the GM's job. In a time of clouded vision, crowded with questions about the upside of players, should it be demanded of Gainey that he make a major move wherein the consequences are unpredictable at best? 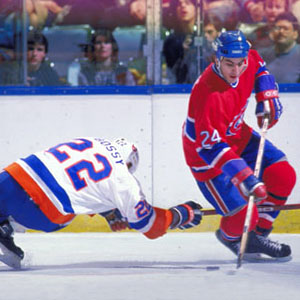 It's a tough call, but the Canadiens obviously need a player who can glue all of its elements into a whole greater than the sum of its current parts. Risk is evidentally involved, and the questions boil down to the here and now versus the consequences of decisions in the long term.

To revisit a recent example from the last two decades, would you have made the Chelios trade knowing what we know now - that we would win a Stanley Cup with a slight contribution from Denis Savard, over what Chelios could have offered the Canadiens over he long term, and still could offer today?

It is a hard choice to make. I know mine.

Let me suggest that the Canadiens could make a trade that solidifies both a Stanley Cup and another 14 year Cup drought in the future - which option would you choose?