Vinny Will Be A Hab One Day

Share All sharing options for: Vinny Will Be A Hab One Day 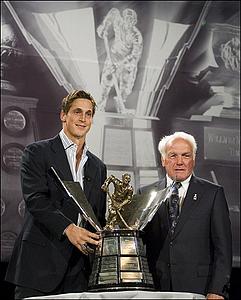 Looking into the future - it's free agent season, July 1, 2009-10, your name is Vincent Lecavalier, and as many as five teams are willing to pay you the maximum salary under cap rules - give or take a dime, that will be 11 million dollars per season.

Roughly 20% of a team's payroll as it would stand now. Likely more then.

If you were him, in two years time, where would you wish to play?

Lacavalier's current team would then still be paying the contracts of Martin St. Louis (4M) and Brad Richards (7.8 M) until both expire after the 2010-11 season.

Between this season, and the 2009-10 season, Tampa will need to deal with a whopping 19 UFA and RFA scenario's, including those of defenseman Dan Boyle (3.625M) and Filip Kuba (3M).

With no less than thirteen of these cases needing to be dealt with next season, the Lightening are painted into a corner. As only five players are signed beyond 2009-10, with none of them being goalies, the team will need to spread a its money thinly. Possible raises to Boyle and Kuba are unlikely, unless Tampa feels it can remain competitive by paying 15 roster players, including its top defenseman and goaltenders no more than $900,000 per season.

What kind of future can Tampa Bay offer the game's current best player when this day comes.

Pardon the obvious pun, but in 2009 Lecavalier will bolt the Lightening for more electric pastures!

Bet your house, your wife's fidelity, and your kid's college savings on it - it's that safe a deal!

Now the Montreal Canadiens will play into this long before it happens - even if you do not hear about it.

Tampa GM Jay Feaster is no stoolie and he will play every available card leading up to that day when Vinny is free to choose his destiny. Feaster has gone on record as saying he will not go down as the GM who becomes known as the person who traded Lecavalier away.

Fair enough for now, but when his job is compromised based on what returns he receives for Lecavalier before that date is concerned, he'll be singing a different tune.

And it might as well be "Can't Buy Me Love!"

The Canadiens will either be Lecavalier's destination or his negotatition leverage. Seeing as all bidders might then be willing to offer him the max under cap rules, Habs included, leverage might well become a non issue.

The Canadiens will not be topped in offering him top dollar and the then 29 year old will choose based on the longevity of the offers.

Seeing as how the Habs were publicly scoured for not landing Daniel Briere, middleweight that he is, not landing Lecavalier, a heavyweight, with a home run offer may garner the organization eternal heat.

The order will come down from Gillett to Boivin to Gainey - let Lecavalier write and sign his own check - for better or worse.

And I'd agree with it.

There was a precedence of the like in Canadiens history, involving a player of similar great promise for whom the Habs opened the cash vaults to.

Not coincidently, Lecavalier wears his number and has played him in a movie.

Many might suggest that Lecavalier would not want the pressure of having to perform nightly under Montreal's glaring spotlight and magnifying press.

My answer to that is that he might appreciate having less weight on his shoulders come that time. At present in Tampa Bay, he is usually the one unique factor in his team's wins. The enormous pressure in having to exceed himself nightly for the Lightening to win, playing close to 30 minutes a game, will surely hamper his career longevity. A change of scenery to a team on which his is not the sole gunner might be a welcome breath of fresh air.

In Montreal, Lecavalier would be at home, nearer to family, friends, and roots. Of course he would be in high demand, but he still would find a certain sense of peace from within knowing the entire weight of a team is not upon him.

Considering the Canadiens could well be approacing contender status by the time Lecavalier would arrive, it could all add up to marriage made in heaven for all concerned.

Lecavalier, the Habs, and some Stanley Cups!

I can see it now.