Senators And Canadiens Pull A Fast One

Share All sharing options for: Senators And Canadiens Pull A Fast One 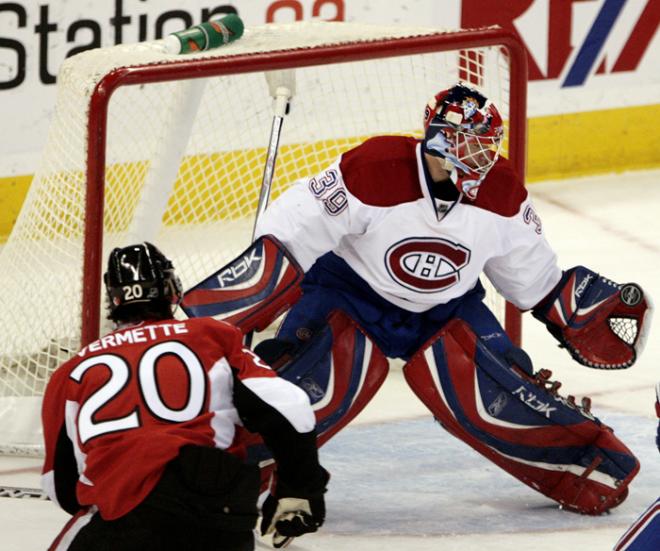 Robert L Note: Unfortunately I was unable to catch yesterday's Habs / Sens matinee due to work commitments. I got blindsided by the start time and scrambled with calls home to get the game taped. That still left me emptyhanded, as 12 year olds programming VCR's go, I was "blessed" with all of 8 minutes of action to check out. My wife and I had been invited over to visit with some longtime friends after work, so I'm left with the notion I've just missed one of the best game's of the season so far. Then again, considering the game's last five minutes, there is one less smashed remote and one less dented wall in the household today.

By the sounds of it, our Canadiens boys are matching up well against the Senators. That can't be said of too many teams this season. Through two games against the NHL's best, both in their building, the Habs have come oh-so-close to gaining points, dropping the games in the final half of the third period. I'll take that result for now, knowing that the Habs have a whole 66 more contests to continue to progress before it starts to really matter.

Seing as I didn't get in on this game, I thought I'd post something slightly different than my usual take, or that of a Montreal based opinion here today. In my Habs Versus Habs Wannabe's post on Friday, I mentioned the Ottawa Sun journalist Chris Stevenson, and how he always appeared to me to be a closet Habs fan. In his column today, Stevenson had much to say that was pro - Canadiens. This is quite the norm for Stevenson in this paper. Oddly, they slag the Leafs at every turn, but tend to lay off the Habs. I think that kind of testifies to them respecting the allegiances of the region. Perhaps a Habs and Sens playoff matchup, as Stevenson also wishes for, would greatly affect this landscape.

Here's hoping that's only 6 months away from reality! 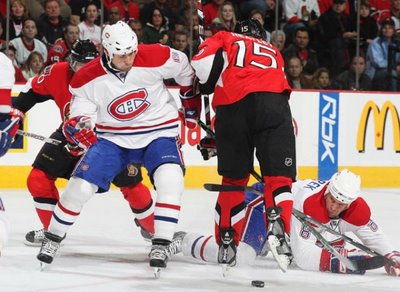 The following are exerpts from Stevenson's take on last night's game:

There might have been a better game in the NHL this season, but if there has, I haven't seen it.

"I thought that was the highest paced game we played in this year," said Senators captain Daniel Alfredsson, who continues to push the bar higher on what it takes to be the best all round player in the NHL. "I thought it was a heck of a game. Both teams gave it all they had."

The Senators came back with three third-period goals to beat the Montreal Canadiens 3-1 yesterday at a rocking Scotiabank Place.

The score doesn't come close to telling the story in this game.

This was the way hockey can be, the game at its best with two teams pushing the puck up the ice, forechecking, creating, skating.

Though it was just 1-0 for the Habs after 40 minutes, yesterday's game was perfect evidence you don't need more goals to make a game more exciting.

You need flow, you need chances, you need the officiating to allow some good, physical play. You need great goaltending and both Montreal's Cristobal Huet and Ottawa's Martin Gerber supplied it in huge quantities. If the Canadiens were flying a little bit under the radar, yesterday's game made sure that is no longer the case.

They matched the Senators in every department until Alfredsson's goal with a bit less than five minutes to play in the third turned the momentum the Senators' way and Chris Neil's seeing-eye wrister less than two minutes later won it.

"We're getting lots of pats on the back and we think we've had a pretty good start and they've got one more loss (in regulation) than us," said Senators coach John Paddock. "For all those Montreal fans who were cheering so loud, I especially liked us coming back."

"(The Canadiens) are getting better every year, I think. Last year, they started off really well and if I remember right, the flu bug hit them at Christmas and took a lot of energy out of them. I don't think that's going to happen this year," said Alfredsson.

"I think they are going to be one of the top teams in our conference and we're going to have some great battles coming up."

There's just one thought that lingers after a rousing start to an NHL tripleheader yesterday: These two teams need to meet in the playoffs.
Can somebody arrange that? 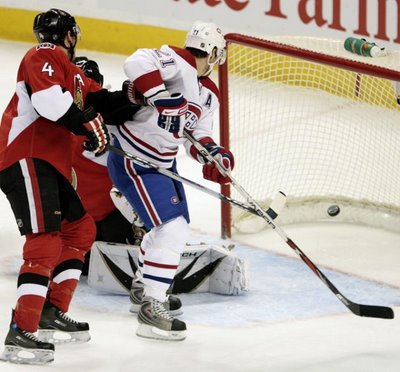 That was one of the best, fastest starts to a game in a long time. At one point in the first, the two teams were going end to end and didn't force a whistle for 2:59. Huet put on the best goaltending performance in the building this year. He stopped Alfredsson on a penalty shot, robbed him with a lunging save later in the second and stoned Randy Robitaille with a glove save. When he finally was beaten, it was by an Alfredsson shot off the post through a screen by Mike Fisher. Both Alfredsson and winger Dany Heatley had their busiest games of the year. Alfredsson played 26:40 and Heatley 26:46. With a four day break coming up, Paddock could afford to use them that much.

Yeesh, Montreal's Michael Ryder is fighting it! On a 2-on-1 in the first, he carried the puck to the goal line, then tried an almost impossible backhander. Guess he had the element of surprise on this side. The Senators weren't expecting him to do that. Quietly, because you never hear from him, Montreal D Andrei Markov has become one of the best in the league. He plays in all situations, leads the Habs in ice time against the other team's top players and with his goal yesterday, was tied for the scoring lead among defencemen with 14 points.

Something you don't see much anymore: Montreal D Mike Komisarek used the "can-opener" move to take down Alfredsson in the second period. No call.

How about Canadiens captain Saku Koivu? He sets up the Habs' first goal, blocks a shot by Heatley and then tussles with Senators winger Patrick Eaves after Eaves didn't like the hit Koivu gave him. Then again, the Koivu line (with Ryder and Chris Higgins) was on the ice when the game turned with two quick goals in the third.

How relieved was Neil to get the winner? He was in the box for delay of game when his backhander in the Ottawa zone went up into the mesh behind the Ottawa net and Markov scored on the power play to make it 1-0. For a long time, that's the way it looked like it might finish. "It was a tough call," said Neil. "I've got a good backhand, but not that good."

The refs did the right thing giving Eaves and Koivu, two lightweights, double minors for roughing in the first period. To call what they did a fight is an insult to fights.