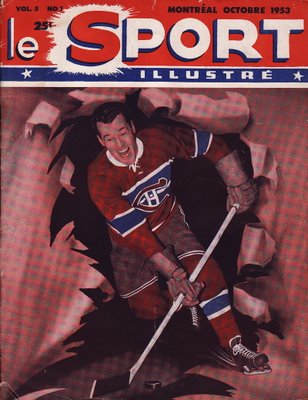 Among the Montreal Canadiens great captains, Emile "Butch" Bouchard stands out as a different breed of leader. In an era when defenseman were uniquely employed to shut down shooters, Butch was one of the best. Strictly a stay at home type, the Canadiens relied heavily on defenseman Bouchard for 15 seasons. 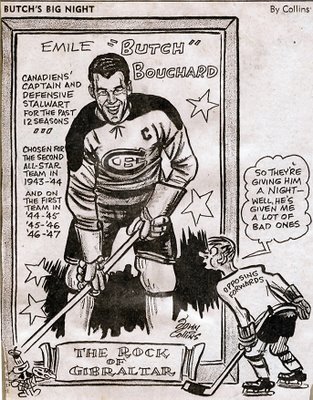 His robust play was an integral element to the Habs defense while his alert passing was an integral component of the team's exemplary transitional game. Bouchard was a tall and strong competitor who used his physical attributes to advantage although he was never known as a bully by his peers. 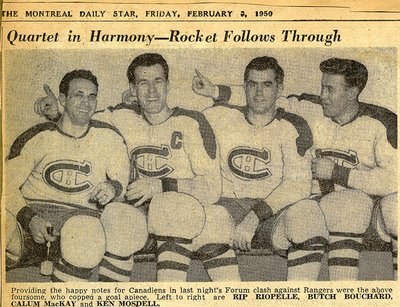 The Montreal native had gained valuable amateur experience while with the Verdun Maple Leafs and Montreal Junior Canadiens, where teammate Bob Fillion nicknamed him Butch. Late in the 1940-41 season, the Canadiens sent him to the Providence Reds of the AHL for a 12-game trial. Bouchard exhibited tremendous poise and impressed coaches by registering three goals in his relatively short minor pro stint. 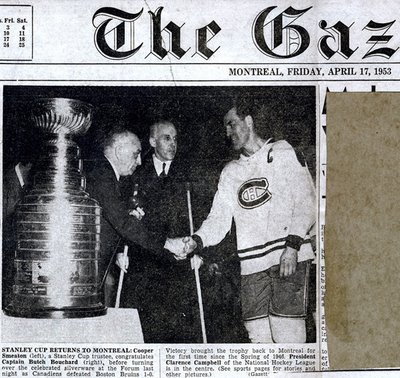 Showing up for training camp in 1941, the 21 year old caused quite a first impression when it became known that he had bike peddled 80 kilometres from Ste Hyacinthe to Longueuil to attend. Habs GM T.P. Gorman was at first skeptical about Bouchard's chances, based on the fact that Emile had only began skating at age 16.

While his brutal first strides were a concern, Habs coach Dick Irvin Sr saw a potential beyond this weakness. Unlike some of the veterans, and rare for the day, he was in top physical condition from the outset of the pre-season. 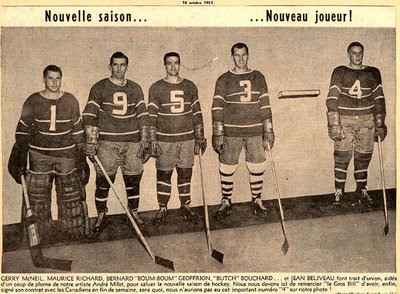 Bouchard upset some of his teammates with his tough physical approach to practices. The Canadiens hadn't fared well in recent years and, if anything, they required an injection of youthful passion to help ignite the team again. This may have been one of Bouchard's most important contributions to the organization. He joined a defense corps that included Cliff Groupille, Ken Reardon, John Jack Portland, and Tony Graboski, and since the Canadiens had failed to replace a rearguard the likes of Walter Buswell, Bouchard was a needed commodity. 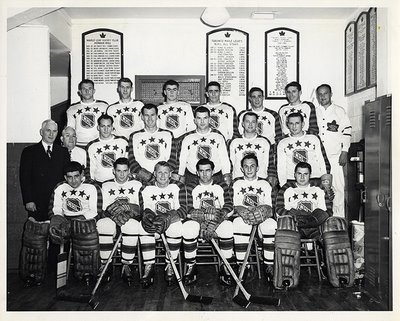 Bouchard developed into a tough stay at home defenseman whose physical game was a superb complement to defense partner Doug Harvey, one of the game's all-time great rushing blueliners. And it shouldn't be overlooked that Bouchard's exceptional hockey sense and accurate passing often started the offensive rushes for which the Canadiens became famous in the 1940s and 1950s. The Canadiens made Bouchard their captain from 1948 until his Maurice Richard succeded him upon his retirement in 1956. 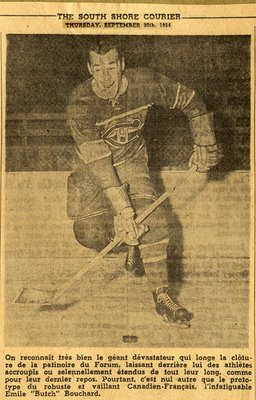 Physically, Bouchard was remarkably strong and often broke up fights on the ice by grabbing hold of each combatant with his enormous hands. To his credit, he never abused his powerful attributes and most opponents wisely avoided provoking him. In turn, he rarely fought. 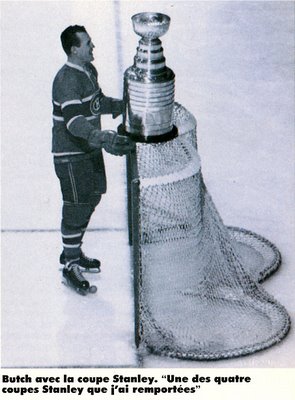 On retiring, Bouchard turned his interests to amateur hockey in the Montreal area. While serving as one of the veterans of the Habs' blue line in the early 1950s, he'd derived a great deal of satisfaction from tutoring younger defensemen and Canadiens management considered him briefly to replace Dick Irvin as coach before settling on Toe Blake. Instead, he began working as a coach and president of junior teams in the province, which proved to be a logical and rewarding move for the recently retired star. 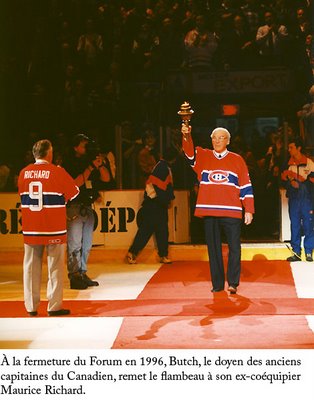 Prior to the 1968-69 season, he was named president of the Metropolitan Junior A Hockey League. One of Bouchard's first ideas was the organization of an all-star game between his metro league and the Quebec provincial junior circuit. The proceeds from such a contest would be placed in an "emergency fund" to be spent on players who were crippled or permanently hurt playing the game. 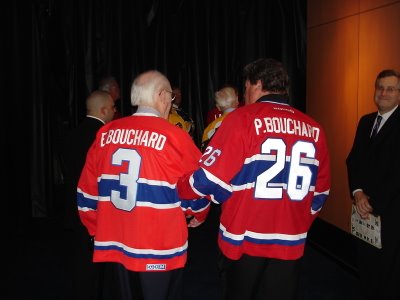 Two great sites in which you can learn more about Butch Bouchard are his unoffcial site and Joe Pelletier's Greatest Hockey Legends. The unofficial fan site has a great many photo's, like those i've chosen to include here. Joe, who has been nudging me of late to include more content on retired greats, has just added Stephane Richer and Mats Naslund to his list of over 60 Habs profiled on the site. Both Butch's and Joe's sites are worthy of a permanent bookmark.