Price Is A Steal As Habs Rob Leafs

Share All sharing options for: Price Is A Steal As Habs Rob Leafs 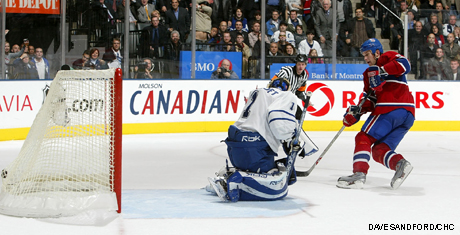 I'm listening to Benoit Brunet, former Habs all purpose utility hole plugger turned commentator on RDS suggest that if Alex Kovalev had played as good last season as he is now, the Canadiens would have made the playoffs.

Now if the Canadiens had played as good last season as they did tonight, it wouldn't have even been close. They would have been tossed from the post season two weeks before it started.

Yesterday I mentioned that goalie Carey Price tends to have a calming effect on the team.

Indeed, they were in a coma tonight, playing what I feel was far and away their worst game of the year.

Perhaps they were inspired by, or playing in hinderence of, what could go down as the worst officiated NHL game in recent memory. I won't get into nitpicking over what was missed, let go, or incomprehensible to the group of zebra's working this game, but I will say that it affected both teams greatly, and the quality of the spectacle deserves better.

The Canadiens, despite a strong start this season, still have a habit of playing tentative hockey when the officiating takes on a random nature. They get shy, they get slower, they do less, and they get stupid.

Tonight, the Habs rarely used speed to their advantage to pursure and forecheck the Leafs. When pinned in their own zone, they became cement footed, which allowed Toronto to freewheel too much. It all added up to giving up 40 shots on goal, something that has rarely occured this season.

Only about a half dozen Habs brought their A - games to this effort.

The second line of Kovalev, Tomas Plekanec, and Andrei Kostitsyn has been worthy of a top line of late.

Mike Komisarek is quickly becoming my favorite Hab. He is developing a Stevens - Pronger - like presence with great leadership and dedication. As a league leader in both hits and blocked shots, he is fast becoming as complete a defensive defenseman as the notion could incur.

Carbonneau's Carey Price gamble paid off. What more could you ask a rookie goalie to do. Of the three goals to get by him, he could only ( barely ) be faulted for giving up a rebound on the second one. A change - up, tipped pass from behind the net caught him off guard on the first goal and a shoulder height deflection - a questionable call - beat him for the third goal.

Each game I watch him play, nails home the point that this kid is the real deal. The doubters in him, during training camp have dispersed into thin air without an argument.

Higgins and Koivu had their moments tonight as well, but it is becoming obvious that they are being handicapped by the play of Michael Ryder.

I like Ryder an awful lot, and it hurts to see him be shut down and made oblivious game in, game out. One cannot point to his lack of effort and work ethic for his failings as Ryder is doing all he can to shake the demons of a prolonged goal drought. Ryder has actually been a much more consciencious player in both ends of the rink this season, which has made his lack of scoring less of a liability. To be truthfully honest, Ryder doesn't bring anything other than a wicked shot to his arsenal, and it is becoming painfully evident to me that opponants know how to neuter his best skill. I'm afraid that his days as a top liner, even as a Canadien, are numbered.

On the brutal side of things, this is one game that Andrei Markov would surely like to forget. After scoring his 6th goal of the season to open the score, Markov game descended into hellish nightmares.

Now I've always taken note of two Markov traits, apart from his talent package, that has been following him for awhile now. One started back when he was a rookie, as he gained a reputation as a diver, and a complainer to officials. This rep earns him many borderline calls and a bum rap on top of it. The other is that when he gets (or warrants ) these dumb calls, he comes slightly unglued, falling into the referees glare as the game moves on.

Tonight, Markov spent 8 minutes in the box (he could've been gone longer had a stick swipe connected with the intended target), and it showed in the shots on goal margin. Between periods, Komisarek noted that the team needs it's best players on the ice, and he may have been referring to his usual defense partner.

Surprisingly, the 6 goals in 17 games Markov has tallied so far, put him on a pace ( could it happen? ) to better Sheldon Souray's 29 scored last season. If he does it, he'll be a Norris trophy finalist, barring any more game like tonight.

Conversely to last Saturday's Ottawa game where the Habs deserved a better fate, tonight they sucked it for long stretches and won.

There is never a shortage of ironies when the Habs meet the Leafs.

If Komisarek's breakaway, 3 on 3, overtime winner doesn't prove how stange and twisted these matchups get, nothing ever could. It will play out again before the year is up.

One thing is certain, this recipe of putting Price in, and taking the night off, will not work this well again.