Lots On The Line For Price and Habs In Toronto

Share All sharing options for: Lots On The Line For Price and Habs In Toronto 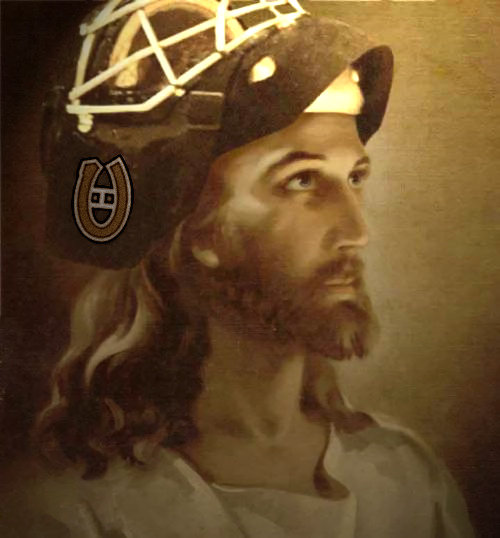 Question: How many consecutive heartbreaking losses for the Canadiens against the Maple Leafs before this streak turns into complex?

Answer: We will hopefully not find out tonight!

This is the scenario in my eyes for this particular contest. That and the perception that Carey Price has usurped Cristobal Huet as the goalie of choice in games versus the Maple Leafs.
For me, these are the two stories that will be played out.

The fact that Guy Carbonneau has chosen to go with Price tends to reveal that possibly the Habs coach figures that the Leafs have gotten inside his team, and his goalie's, heads. Team psyche's are often fragile when confidence is young, and the notion that nothing much seems to faze Price might be an attempt to rebuild it. Coming off a game in which the Canadiens played 55 minutes of near perfect hockey against the league's best team before fizzling, this is an ideal way to refocus the troops.

No one on the Canadiens would dare suggest that they may take Toronto lightly on occasion. God help us if anyone on the team is stupid enough to even think so.

Habs / Leafs games have been following a particular trend, going back to last season. Toronto comes out all fearless guns a - blazing, usually helped by a dumb Montreal penalty, and taking a large advantage in shots, going up by a goal or two, before the Canadiens settle down to begin evening the game up. The Habs will then take a slight lead into the depths of the third period, and finally find some unscripted creative way of catastrophically blowing the game all to hell. 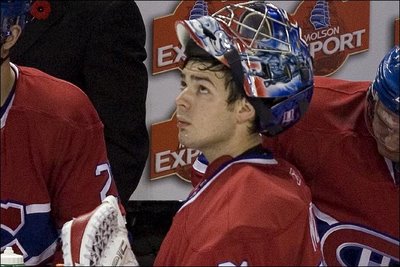 While their slacking off might have roots in underestimating the Leafs once they seem to be put away, history should have taught the Canadiens by now, that against the Canadiens, the Leafs rarely roll over and play dead.

For what the Leafs may seem to lack in some area's against other teams, against Montreal, pride is not one of their deficiencies. Of course, Montreal measures up equally to the task, but they have moments where it's as if all they need to do is blink to see the deja vu of past disasters.

This is where the trouble can start and a complex can set in. Detroit seems to be dealing with the same masked fears when it comes to Chicago. Ottawa may still be carrying scars from Leafs undoings of the past. Montreal is in the Bruins heads in the same way.

It's never easy to explain why it happens, but recurrances built upon each other magnify what may only be a small focus issue. 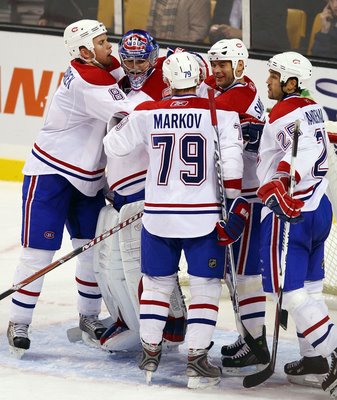 It's never easy to explain why it happens, but reoccurrances built upon each other magnify what may only be a small focus issue.

That is why, switching Huet for Price might play into settling down the Canadiens more to Carbonneau's liking. It might seem preposturous a notion, to those unfamiliar with Price's play so far, but Carbonneau must be atuned to the calm Price brings about in his teammates.

Surely some will bristle at the thought that a goaltender with all of five NHL contests under his belt can be ready for the jump from the frying pan to fire that can be games at the ACC.

It could well be that after this game, Toronto hockey fans may be better aquainted with Price.

The kid just never gets overly excited - before, during, and after games!

The kid is so cool, focused, and collected he was probably scanning the pages of The Hockey News while losing his virginity!

"Distracted" just is not in his vocabulary.

What has worked so far for Price at the NHL level is what has often worked best for him in past conquests. Meticulous focus on being square to a shooter is where his game begins. He then concentrates on keeping himself big, which offers shooters little net to view. Underrated in his game, is how pucks bounce from him as though he were composed of soaked oatmeal. Rebounds either tend to drop at his feet, or be carefully steered to harmless area. 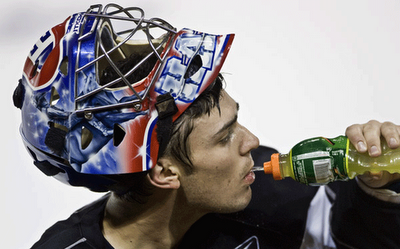 All taken together, he has grouped a rare set of skills for someone who's only twenty.

What he brings also collides perfectly with the Maple Leafs tendencies against the Canadiens, which comprises of shooting often, and from every possible angle.

Huet has had his share of flukey goals beat him this way in games versus the Leafs. One game of seemingly bad luck, can be cast off. Having it happen again, becomes annoying and a concern. After the third occurance, one begins wondering what's up with his focus.

With Price starting, the Habs may well get off to better start also. The Canadiens players have great faith in the calm demeanor of Huet, but it goes missing at the drop of the puck versus the Leafs. Should their game plan be better executed with confidence in Price as the last line of defense, a win for the Canadiens tonight could mark a turning point in their season.

A turning point which may see the Habs goaltending duties split more evenly from this game on.

Two fine reads that tag well into this game preview are the Habs Inside Out entry that has a comparison of the Habs and Leafs seasons so far and a Globe Sports article titled "A Tale Of Two G.M."s", that is a must read for fans of both teams.

Robert L Note: The photoshop image of Jesus in a Habs goalie mask was not sought out for this post. It was saved, through a Facebook search, after reading a joke that a regular reader had sent me. Just for laughs, here is the joke, retuned of course for this evening contest. I'll find out after the game, if Jesus is pissed at me!

John Ferguson Jr, in the far away future passes away after a long life. Past the Pearly Gates of Heaven, he is greeted by Jesus, who walks him along, while discussing his contribution to Earthy life. After a while Jesus pauses and says "John, you have been a good man, overly generous to those in your path. I have something to offer you, and please be advised that not everyone up here gets such reward."

With these words, Jesus points to a house at the bottom of a hill. It is a nice bungalow, with subtle blue and white siding, identified by a Toronto Maple Leafs flag, flowing above the attached garage.

"Thanks so much, dear Jesus", JFJ exclaims as he proceeds to walk towards his heavenly home.

As the former Leafs GM reaches his drive, he glances high upon the hill and notices a multi - room mansion of dominating proportions. It features 4 marble white pillars leading to the doorway, skylights open to the sun, and stones across the house's front stretch that parlay into a Montreal Canadiens logo and stripe that twist around the whole of the structure. Above it are dozens of Canadiens flags featuring retired numbers of familiar legends.

Ferguson shrinks and shudders at the site. Curiously, he asks Jesus, "This may sound vain, but why has Bob Gainey such beautiful residence?"

"That is not Bob Gainey's home", counters Jesus, "But you are familiar with it's owner, I'm sure."

"Oh so that is where Rocket Richard lives, then", says a humbled Ferguson.

"Close", Jesus offers, "You're getting warm, but not quite! Let's just say it belongs to someone in whom you've spent many prosperous days following in their footsteps to arrive here."

"It's my father's house, I should have known."