Share All sharing options for: Koivu Undeserving Of Language Nonsense 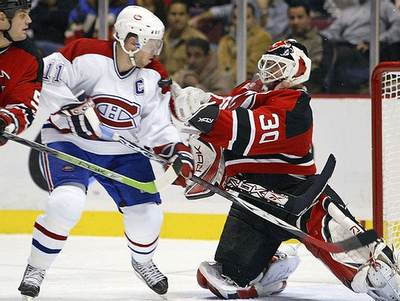 With apologies to regular readers, I just could not sit this one out. It is not often that I go off topic from hockey posts here, but after having this burn inside me for twenty four hours I had to speak my mind and go off track some.

By now many have heard the quote from moron separatist lawyer Guy Bertrand that were aimed at Canadiens captain Saku Koivu and his lack of french speaking skills. Bertrand basically suggested that Koivu is not fit to captain the team based on the fact that he is not french speaking.

The Gazette's Pat Hickey steamrolled Bertrand's credibility in an inspiring article today, and Le Journal de Montreal published a piece that covered Koivu's feelings with intelligent depth. Another Journal piece garnered opinions from Habs players that covered all ranges of incredulousness. La Presse doesn't deserve the click of my mouse!

What got Betrand's shorts in a knot initially, began when Koivu chose to introduce the members of the 2007-08 Habs at the home opener three weeks ago using only the english language.

Bertrand's quote was, ""I have the right to be served in my language. He has been playing for 12 years. He is married to a francophone. It demonstrates contempt for our language. It is not respectful."

Now I can fully understand why Koivu chose english over french. Like, how on earth would he have said "Carey Price" in french?

Would he have had to say "Carey Prix"?

And exactly how does being married to a francophone (she isn't, she simply speaks french!) while not being able to speak it, show contempt?

Perhaps Bertrand is confusing the Canadiens with a publicly funded institution. While the Habs may be an institution in many minds, Betrand has little right to dictate to it in any form. 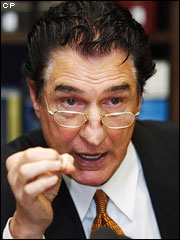 But hey, this is the same clueless bird that tried to petition the Canadian government and Hockey Canada into allowing a Team Quebec to compete in the Olympics.

Like many lawyers (apologies to the boys at Four Habs Fans) turned politicians, they often seek out political gains by making asburd notions public. As separitist fires cool, you can always count on some idiot to make a ridiculous claim for sovereignty to get the debate going again. Without issues burning, these bozo's have virtually no polital life whatsoever.

It is quite unfortunate that an ill equiped stool such as Bertrand can stir the pot of idiocy so easily, but that is, and seemingly always will be, the nature of the Quebec political gains game.

For myself, I have always been quite proud of my bilingual abilities, but I become embarrassed and ashamed for the righteous francophones when I read of such stupid notions.

As one poster at Habs Inside Out suggested, ignorance, when it comes to these types, truly is bliss.

Unbeknowst to many people of the separatist bent, is how far cut off from reality these politicians wish to lead people in their pursuit of power. They have literally become historical revisionists in this goal, carefully wiping the truths from younger minds to achieve a sense of a sovereign nation existing within Canada.

For the most part, it exists purely in their minds.

My favorite example of whitewashing history is the story of Rene Levesque Boulevard, once known as Dorchester Blvd.

Everyone knows what destruction Levesque brought to Quebec's social fabric while manipulating political processes for gain and greed. In the country's formative years, the British and the French fought a war over the control of the land that is now Quebec, with the French losing their rights. During British rule, and prior to the French settlers being returned home to France, another war was brought on by the U.S. in which both the British and French united to fend off. After everything had settled, and the U.S. army headed home defeated, a British General asked the Queen of England to reconsider sending off the French to France. The Queen conceded, thanks to the General's urgings, and Canada began being born into what it is today.
You'd think there was someone to thank for all this!

In Montreal, a street honouring this General was named for him in the downtown area.

Everyone knows it - it is Dorchester Blvd, once one of the longest streets in Montreal, running from the Chomedy area straight out to the West End.

Not any more! Sometime in the late 1980's, all but a few miles of it were renamed after Levesque.

This from a province that declares "Je Me Souviens (I Remember My Heritage)" on their license plates.

Now for this political turd to have been dumped on a valiant and undeserving Saku Koivu is something that ought to be brought out in the House of Commons itself. Nevermind what the man has contributed hockey wise, he is also a tax paying Quebec citizen eight months of the year.

I say he has rights, and one of them is the right not to be slandered for no good reason in a public and political forum.

He has done nothing to deserve it. He has committed no crime. He has broken no law.

There was no outrage by Canadiens fans after the Habs opening game to even suggest what Koivu failed to do caused even the slightest ripple.

In response, a surely startled Koivu, could only reply a meek and somewhat condescending "I'm not perfect".

It is likely he was overwhelmed by it all - and who could blame him.

Yes, in a perfect world, perhaps the Canadiens captain would speak both of our official languages. In this imperfect world, only a small majority give a damn that he don't.

In every other regard, the word "perfect" suits enough of who he is to satisfy me.

My captain has proven his eligibility beyond the job description in his suitability for the role. There's no need to recount Koivu's many trials to ascretain his worth to the team's fans, the province's citizens, or the team itself.

Many undeserved facets of life, as we dread it, have been tossed unsparingly in Koivu's path over the years. Inspiring as we've known him to be, he continues to make us proud on and off the ice.

For all that has been put in his way, many feel he deserves nothing less than to win a Stanley Cup in this city and province for his heroism. This is why he is here!

I say he also deserves a public apology from this bonehead lawyer and public servant in the name of Quebec and Canada.

Perhaps sending him thousands of Koivu autographed Habs pucks would sensitize this creep to the feelings of the province's citizens.