Habs Versus The Habs Wannabees

Share All sharing options for: Habs Versus The Habs Wannabees 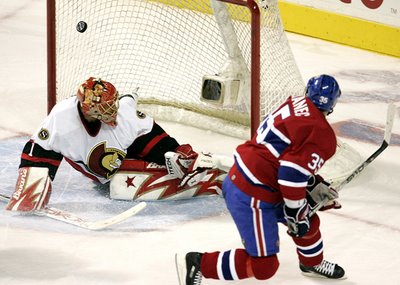 A stretch, you say! No (reference to excrement deleted)!

In the Wednesday, November 7, 2007 (circle that date!) edition of the Ottawa Sun, that is exactly how the papers sportswriters, three of them in unison, decided to tag this years Senators.

All this based on an excellent start, a whole 14 games into the new season!

First there was a opinion poll asking local fans to compare the editions of each team. Then there was a cartoon in the letters section of a Stanley Cup puzzle coloured in red, white, and black, with the names of each Senators player on a puzzle piece. Finally, there was an article that dared to compare a team that's never won a Cup ( or a city with an 80 year drought!) to one one hockey's greatest dynasties.

Talk about a WHOA!

If horses had been near me when I reacted to this, the straps tied to their bridles would have caused them to backflip!

Now I get that this season's Sens have gotten off on a record pace. (Incidently, the Sens lost the next night!)

I also remember that after 14 years of crying and trying, they finally reached the Stanley Cup finals last season.

I also recall that two seasons back, the same Ottawa scribes were likening the team to the 1980's Oilers.

I'm not kidding, when I suggest - without having won a Cup - why the upgrade?

Now I will do my best so that what I am about to say concerning the Senators, in comparison to Habs, does not come off as some trite and uneducated putdown by a 2 year old blogger about to make his first $100 in Google ad money.

The teams, simply ain't in the same class. I'm talking about today's Sens versus yesteryear's Habs, as well as how the current team's regimes stack up against each other. 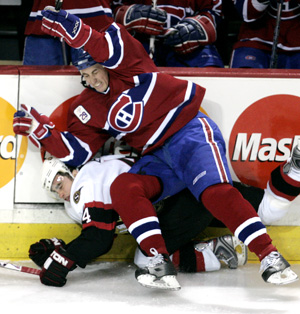 The Sens have shown a complete lack of class when it comes to the Habs in the last two seasons. Last year's pitching of a Habs fan off the Sens boat video, just days after Bob Gainey's daughter drowned, was one such stain. Pumping their chests after beating down an injury decimated Canadiens team two seasons back was another classless example of pomposity.

It's not that I dislike the Senators - I do, kinda. This is a well built team that has been structured to go all the way, and I'd bet on them to win the Cup. It's just that the atmosphere that the team (not so much the players) and it's unapologetic press corps reeks of, goes off like a mustard infested skunk spraying up my nostrils.

I've tried to help that, by putting aside the amateur and juvenile takes by the press covering the team, but in time I have become unable to disassociate the two. Let's just say that when it comes to maturity, Habs fans have PHD's and the Sens neophytes are learning how to use pullups.

What puts me off most has all do with arrogance and their stench of superiority, without a history to refer to, or having won something worth bragging about before it has been won. Underlining the juvenile notions in the paper, are the constant swipes at the Toronto Maple Leafs, a team they have barely showed a superiority to, in loads of differing ways.

For two years now, the letters to the sports editor, have contained a daily swipe at the Leafs, whether it be from a pro Leafs or pro Sens camp POV. Of course, it has been that length since Toronto has hurried the Sens post season, but they never allow that to cloud their reality.

Another reality they back away from, is the cold hard fact that the city of Ottawa probably contains double the Habs fans to those of a Senators stripe. A team doesn't win a batch of Stanley Cups, all carved deep into recent memory, without stirring the passions and allegiances of a bilingual populace entreched in the game's history who live but one hour away from the home of 24 Cup wins. 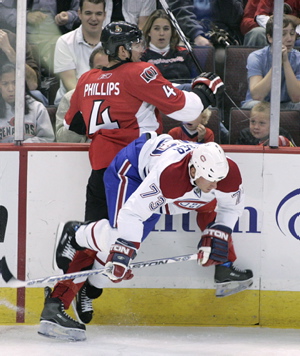 Heck, 14 years ago, when Canada last won a Stanley Cup, Ottawa felt such a part of it, that the Habs Cup parade could have dovetailed from St. Catherine's onto Bank St. without a break in atmosphere.

But things have apparently changed, only in the media, since the Scotia Bank Corel Palladium was dropped into a cow patch in Kanata a decade ago. Picking juvenile ( I say, creatively ghost written by Sens media ) fights with Leafs fans is a smartly camouflaged distraction to cover the fact that Ottawa remains Hab fan dominated.

The Ottawa media is triffle afraid to confront this reality.

Chris Stevenson, the only writer in the Ottawa Sun with an ounce of credibility, is a closet Habs fan. Other Sun scribes such as Bruce "Boo Boo" Garrioch and Don Brennan write about the Sens like they are on the team payroll - rarely an unkind word is uttered on the team.

I cannot wait until these teams finally meet in a playoff round, considering the amount of tickets Habs fans snap up in Ottawa for regular season games. A post season matchup would likely see the Montreal faithful eat up those 2000 seats that never seem to sell in the capital until gametime. Add in that the Hab faithful will outbid the Sens shrinking violet voices on scalper's row, and there will be a hefty Blue Blanc Rouge contingent come game time.

Now everybody knows the effect thousands of Leafs fans in an Ottawa arena has had on the Senators playoff success. Maybe this spring Daniel Alfredsson will look into the masses and wonder who all the red wearing is for.

Maybe the media should try a comparison with the 1967 Leafs first!