Habs Show Up Late For Date With Leafs

Share All sharing options for: Habs Show Up Late For Date With Leafs 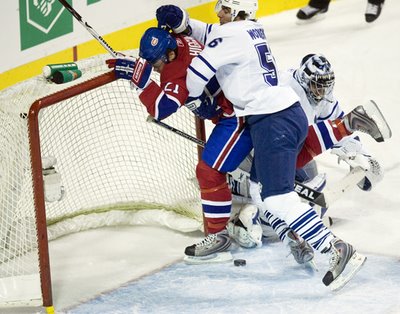 Yeah, I feel like writing this about as much as you feel like reading it, Habs fans.

I'll be as brief as my disgust allows me to be - that and I have to get up for 5 A.M., clock rolled back and all!

The Leafs stole one tonight, or were handed it, depending on your take.

When these two teams meet during their eight yearly matchups, weirdness reigns supreme. The Leafs team that is made to look like minor leaguers by the Washington Capitals one week earlier, take on the semblance of true contenders for long moments of the game. The Habs, who have commanded virtually all but one or two games played thus far, seem overcome by their own exhuberance, and fall to pieces at crucial times.

Other strange things happen on either side, like plays breaking down oddly, creating turnovers and scoring chances where normally there is caution. Pucks bounce different off everything. All Star goalies turn into sieves. Officials seemingly caught up the game flow and excitement either miss or allow a half dozen calls on both sides to vanish like hockey fans in the U.S. Star players are shut down and covered while lesser players look like giants. Goalposts turn out the be the first and second stars of the game. Referee Chris Lee points to center ice after a non goal call! Heck, even the games three stars were backwards.

Regardless of who wins these games - lately it's been Toronto, there seems to be a twilight zone segment scripted into outcome, where after all's said done with it remains mysteriously inexplicable. 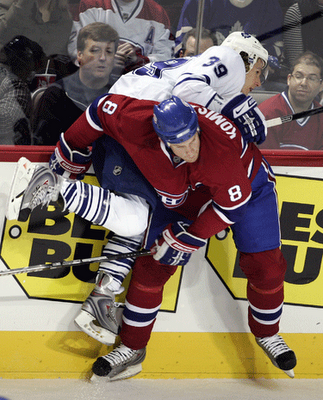 Perhaps the Habs set their clocks back an hour before the start of the game, because the Leafs jumped all over them soon as they were up a goal. I thought the Canadiens outplayed the Leafs from the middle point of the first period on, with Toronto still getting a fair amount of good chances.

It's an old story that gets played out in rinks around the world on a nightly basis. One team capitalizes on its chances, while the other team doesn't.

Full credit in this one to Toronto for showing up on time to play for starters, and then for making the most of their opportunities. This wasn't the Canadiens worst showing by any stretch so far this season (the Thrashers game takes that honour), but it may have been one of the Leafs finer efforts. 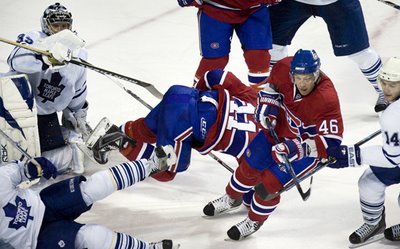 Opinions differ amongst Leafs fans as to what this team really is. The three I sat with during my afternoon coffee (they'll be waiting on me tomorrow!) were each of a different angle on Toronto's hope's. My take is that they played this good - can't they be more consistant?

As for the Habs tonight, they seemed a touch off. When they created what looked to be sure goals, the timing fluctuated and passes were fired too hard or too soft.

The connundrum for a game like this is, what does a team learn from such a heart knifing loss?

Begin with showing up on time. The other lessons come through time and experience.

So far this season, the Habs have learned, or are putting into practice, the virtues of a tigher grip on the 5 on 5 game with less passengers and the worth of discipline when it comes to ill timed penalties.

In my belief, the sin of the night might just have been in taking the Leafs lightly. If in fact they looked at the Leafs scores from certain games this year and figured that they had played the night before and would be easy prey, then shame on them.

They should know better that the Leafs always come to play, especially in Montreal!

I've long gotten the inkling that Toronto takes these matchups more to heart, more seriously than do the Habs. I can't really put my finger on why - it could be because of many different things.

One of my coffee buddies says that these games are their Stanley Cup, but I don't exactly buy that, not from a player point of view at least.

In any case, this was as entertaining a game as the buildup to it was. The game delivered great value in it's passion, and we get to do it again six more times.

Maybe next time, we'll all be more enthused when it's over.