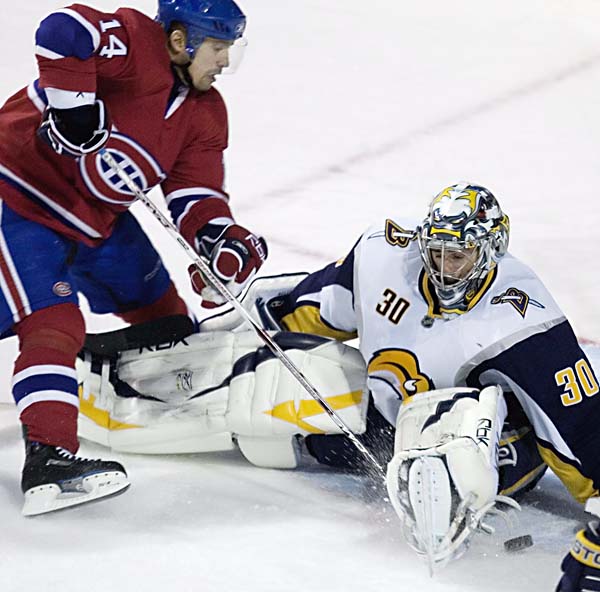 If the Canadiens needed a win quickly, one that they could feel good about, they earned one tonight.

They did it by playing some inspired Guy Carbonneau type hockey in tight game against an opponant that is known to keep coming and coming. There was little margin for error in this game and the Canadiens made few mistakes. As a scoreless game turned into one goal lead - thanks to a Tomas Plekanec beauty, cautiouness ruled while the Sabres were still able to outshoot the Habs 29 to 19.

Where the Canadiens were smart, was in limiting Buffalo's quality chances. After being outshot 16 - 8 in the opening frame, Montreal allowed only 13 the rest of the way and Cristobal Huet rarely needed to break sweat on most of them.

Oddly for a Sabres / Habs duel, only two minor penalty calls apiece, discounting a late Buffalo misconduct, were distributed during the game. The Sabres surely did not want to get picked apart by the leagues number one ranked powerplay. This was one game the Canadiens would need to win the hard way, which for them means faultless 5 on 5 play.

Other than blanket Sabres shooters from getting inside, what they did best this evening was beat Buffalo to the puck consistantly all game long. It started with the centerman winning 33 of 58 faceoffs and spending a great deal more time in the Buffalo zone. When being outshot like the Canadiens were, these facets testify to them not getting pinned in their own zone often and that the transition game worked fluidly on the night. Apart from their powerplay time, the Sabres rarely enjoyed extended stays in the Habs end.

Coach Guy Carbonneau made few adjustments to his lineup tonight, and it proved to be the right moves. It was thought that rookie goaltender Carey Price would receive the start, after a so-so night by Cristobal Huet on Saturday. To the surprise of many, the coach stuck with his starter who rewarded the faith with a solid, if unspectacular showing.

The only other move of consequence was switching Guillaume Latendresse and Andrei Kostitsyn places, bumping the Belarusian up to the second line. The switch paid off when Kostitsyn, on a two on one with Plekanec, threw a sweet pass by a sea of charging legs to Plekanec, giving the Habs all they'd need to win.

Prior to the game, there was much speculation as to how Carbonneau would treat the efforts of certain players, after a loss that certainly gave him much to ponder. Other than assessing the goaltending correctly, Carbonneau gives more than a second glance at the work and habits of concerns such as Michael Ryder, Latendresse, and Kostitsyn, who have surely tested his patience at times with what is most fairly described as uneven play. 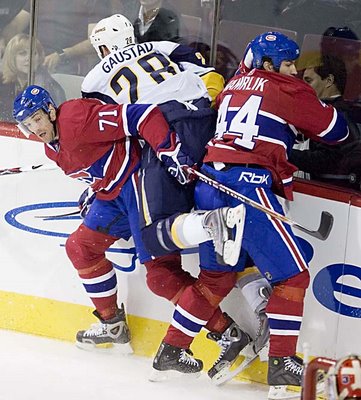 While Ryder's been a hunter slow to load his bullets, he has shown dedication and awareness to a more complete game. His status is tied to the team's overall evaluation by the coach. As has been Carbonneau's habit, Ryder still gets dropped down a line or sits during crucial times in game, and has avoided a worse fate while playing out his slump. Timing is the main issue with Ryder, and as long as his work ethic and focus remain high, it is doubtful the coach will employ more drastic measures.

As for Latendresse and Kostitsyn, tonight's switcheroo had different connotations. Neither were being sent messages or given reward, and the alteration for this game may have just been a case of what is the right fit in line matching. Both players are young, and in full developement stages. A night in the press box may deliver the coaches disapproval, but in the end does little to help them along as they need to play to put into practice the teachings of the coaching staff. Little by little, and by each game, each player seems to be coming around in small steps. Carbonneau's take is that the steps made continue and are in a positive direction.

The Habs now hit the road for four in a row, and with expectations being raised, returning home with anything less than 5 of a possible 8 points would be seen as failure. What looks up, is that the Canadiens may have played the perfect road game at home before heading out.