Share All sharing options for: Habs Fall On Buffalo's Sword 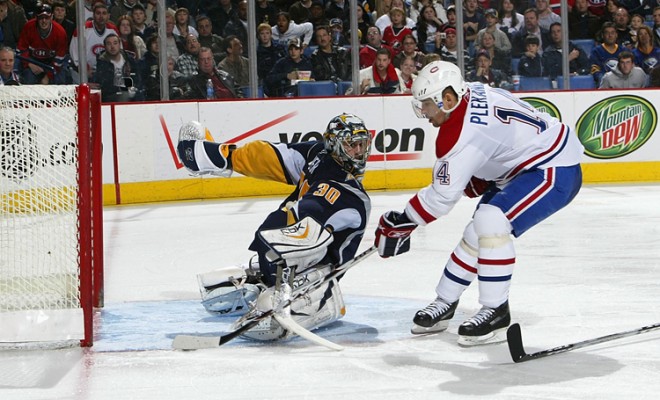 There's an old Roger Miller song called "You Can't Roller Skate In A Buffalo Herd" that was a bit of a novelty hit in 1966. It's not something that you'd want to seek out via Google or Kazaa - it's a total cringer!

Near the end of the song, as it fades out, Miller rhymes out the title line and the song ends with a bleeped out slang that most radio stations wisely cut out in the day.

The line might be pertinant to last night Habs / Sabres tilt.

The answer as to why one cannot roller skate in a buffalo herd, is that you might slip and fall on a buffalo tird.

The reference to excrement would be my analogy for that dubious third period call on Mike Komisarek for tripping, that led to the Sabres winning goal.

What I don't get, and what angered me about the call, is why the same play 100 feet down ice is permitted, while it is called a penalty on the perimeter of the Canadiens blueline.

Komisarek dove to slash the puck away from Derek Roy, clearly touching the puck first before the Sabres player was upended. By the book, this should not be called tripping....but it was.

Had Komisarek made the same move on a Sabres player on a breakaway, no call would have been made.

"I didn't see anything wrong with the play," Montreal coach Guy Carbonneau said after the game. "He wasn't trying to trip him, he was trying to push the puck out of our zone. What happened after doesn't really matter. That's a hockey play." 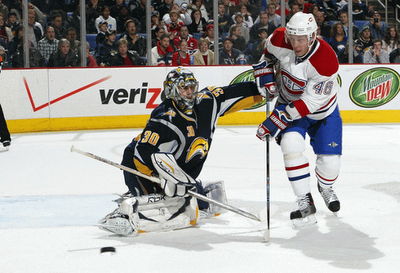 In the end, I despise seeing such things happen, where games are seemingly decided by an official's take on an infraction. This double standard leaves a bitter taste, especially when other calls ghostly vanish into oblivion game in, game out.

To be honest though, this was not where Montreal lost the game - not even close!
The trouble started back in the first period, when the Canadiens played flatfoot hockey and let the Sabres beat them to every loose puck.

The Canadiens finally woke up once Buffalo had a 2-0 lead, and slow starts such as this on the road is asking for trouble.

Now maybe it is just me, but the Habs seem to be developing a problem with taking teams below them in the standings somewhat lightly. There seems to be a trend of not coming out all guns firing against certain opponants. Being that the Canadiens are a team in full progression, seizing and learning lessons as they grow, this could be forgiven and filed under growing pains.

But this lesson should have been grasped last time they departed Buffalo with their tails dragging between their legs. Heck, it was all of one week ago. 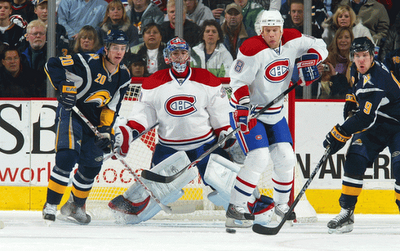 As an inter - conference rival, our boys should know the Sabres tendencies inside out. The teams are in fact quite similar as Buffalo is not a team of great size, but one who utilizes it's speed to it's advantage.

Last night they beat Montreal to the puck constantly in the game's first 25 minutes. For that stretch, the Habs were so hesitant and cement footed, one would be baffled to wonder how their recordis what it is. They looked like a cellar dwelling team, unprepared to face the opposition.

Canadiens goalie Carey Price even noted it in his post game comments, while not shying away from the truth.

"We could have played better," Price said. "They got to loose pucks better than we did."

Once the Canadiens got their act together and tied the game, it was too late. One call tipped the scales in the end.

Only three Habs impressed me tonight - Chris Higgins, Tomas Plekanec, and Guillaume Latendresse. The D didn't hit much and the forecheck for most of the game was non - existant.

Tonight Montreal gets to repent their sins against these same Sabres. The good news is that the Habs bounce back well from losses.