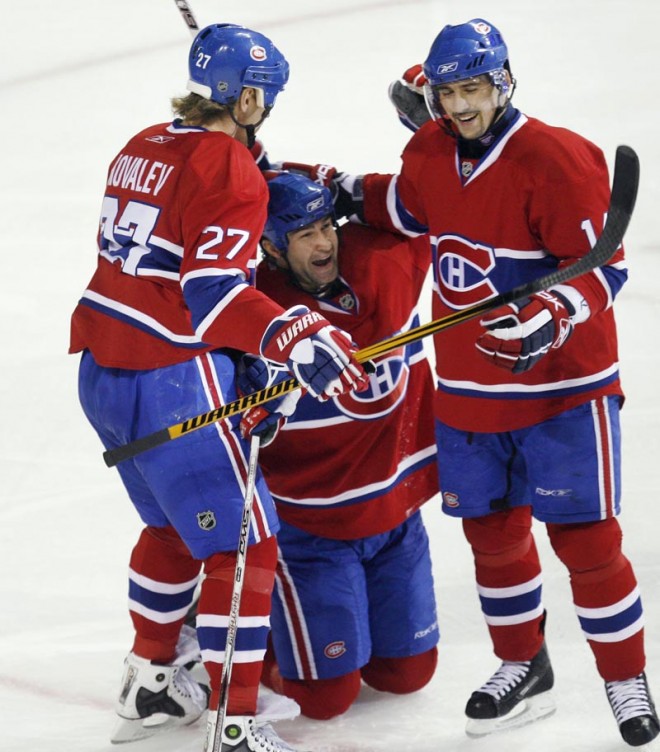 Was this an exciting game?

Talk about your gunpowder induced barnburners, this game had everything but a jersey retirement - that comes Monday!

As the third period turned into a blowout, a question came to me. The Bruins or the Flyers - which team deserves the distinction of being called the "Dumbest Hockey Team of All Time?"
Each team has a history of stupid, as lengthy as it is embarassing, and both tend to turn to thuggery on occasion, especially in instances of losing against Montreal. It's never worked and never will.

I'm curious to know who Habs fans would choose as dumbest team ever, so look for a poll attached to the sidebar to decide the answer.

Tonight, Boston made a bag of hammers look intelligent, starting with that big zero, Zdeno Chara.

This lug is over rated, over paid, and over used. He's brought nothing to the Bruins since they signed him to a huge deal. He's the team captain, and was brought in to steady the defense, but tonight he lost his marbles twice and did more to help his team lose the game than win it.

Dumb is taking obvious liberties against the team with the best power play in the league and expecting to win.

Dumb is also waking up a Canadiens team that was asleep, for all intents and purposes, for two games. After a brutal showing in Buffalo, Montreal needing a rallying cry type of game and they were handed it by the Bruins.

I arrived home too late last night from an Ottawa tournament to write about the debacle in Buffalo. I watched a fast forward version of the game on tape, sat down to start typing and found I was rewritting the same rant from the Toronto game the previous Tuesday. Watching the post game highlights and interviews, I did see Guy Carbonneau, gritting his teeth slightly, and noticed a nerve near his temple pulsate to purple, as he admitted that the team had shown a lack of intensity and focus in practice over the last few days.

If such is true, tonight's victory must have been spirit building for the Canadiens - and not a game too late! 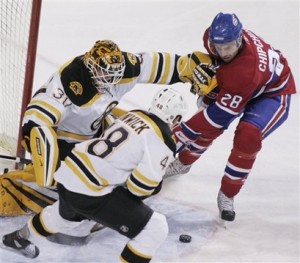 Nevermind the offensive keg they unloaded on Boston, seeing the likes of Andrei Kostitsyn and Tom Kostopoulos drop the gloves and players such as Steve Begin, Josh Gorges, and Guillaume Latendresse sticking up for team mates must make a coach happy.

Four of the Canadiens who impressed me most were Michael Ryder, Kyle Chipchura, and the Kost's - tops and tits.

Ryder was one of the players last night against Buffalo who played as if something were at stake. Tonight against Boston, he applied himself to making a difference as much with his body as he has in the past with his stick. I noticed how his physical play opened spots for linemates as well as himself. This is the work ethic that makes slump vanish, and I sense that Ryder may have turned a corner with his commitment of late.

Chipchura is revealing himself to be even more than I had expected him to be. Not only is he sound defensively as billed, but he is also strong and sly. He has a built in sense of anticipation in countering plays and has a variety of moves with the puck that are never obvious to read. Once this boy's skating upgrades and his faceoff savvy improves, he's going to be a pivotal player in all area's of the Habs game.

Kostopoulos is unreal. He drops the gloves knowing he's unlikely to win a bout, but puts team needs first everytime. Some players take games off, some merely periods or a few shifts. This guy doesn't take a stride off, and is always in consistant pursuit of either the puck, a hit, or both. He's the on-ice analogy to the parable of the devil snapping at your heels. 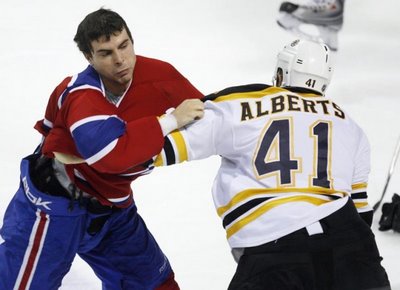 Kostitsyn is a jewel just beginning to shine. I find that he has finally seized what he needs to do to reach the next level. I've mentioned before that he is potentially the player with the most complete package on the team and this game displayed all of those notions. His shot, size, and vision were each used in exempliary fashion against Boston. Should he continue to dig this deep to display his tools ( Insert bad Tlusty joke here ) on a consistant basis, he will become a point per game player before the season is out.

I was also pleased with Latendresse's play in this game. He is rounding out well after a slow start and seems to be getting the message as well. There is more intensity and focus coming from him, but it has yet to find a constant groove. When I find myself gnawing my teeth at his shortcomings and youthful errors, I remind myself of his age and judge him not on the somewhat confused player he seems to be of late, but rather on the complete player I feel he one day could be. Right now, he reminds me of a young John Leclair, who showed only intermitant flashes of a bigger game in Montreal before busting loose when teamed with the right players in Philadelphia.

Some other things to like about this game were:
52 shots on goal - hot damn! Are the Habs that capable or are the Bruins this porous on defense?

Two more goals from defenseman and three more from the powerplay unit. Combined with a four point game from the fourth line, and contributions from the top two lines, it is hard to quash a team which has all wheels rolling at once.

On a night where the defensive mindedness was secondary, the offense was unleashed. The game itself got a standing "O" when it was done.

Carey Price wins the game, without having to be the difference.

Whether it is a bag of Chips Ahoy, 2 points in the standings, or sealing a playoff win, the Bruins still can't beat the Habs when anything is at stake!

Cause they're as smart as their coach is hairy.