Eric Desjardins On The Briere Treatment

Share All sharing options for: Eric Desjardins On The Briere Treatment 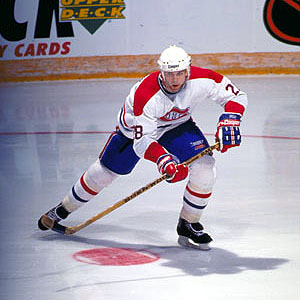 "Finally, what it does is discourage the remaining Quebec born players from coming to Montreal."

Former Canadiens defenseman Eric Desjardins spoke out recently, in a column published in la Presse, about the treatment shelled out at Daniel Briere, who was fiercely booed last Thursday, upon playing his first game since signing with the Flyers.

I've translated Desjardins' article here for readers of English only, and while he does make some interesting points, I find he's missing the whole deal by miles.

Point being, Briere doesn't play for the Canadiens, he's an opposing player!

Still the treatment of Briere was harsh, but I doubt that it throws up the red flags that Eric envisions. Had he been speaking of the treatment given to Patrice Brisebois, while a Hab four seasons ago, he would have brought up a more concise reference point. Few Habs in history have taken it on the chin like Brisebois did, yet he still chose to return to Montreal to finish his career.

Riddle me that, Eric!

Desjardins does make a point to state that the recent absense of a winning team also affects the attraction of free agents as much as anything else.

After Desjardins piece, I will say my peace on his take. For now, here is what Desjardins had to say:

"Finally, what it does is discourage the remaining Quebec born players from coming to Montreal."

I am refering to the recent visit from Daniel Briere last Thursday, on what amounted to a night that is sure to make Quebec born players speak amongst themselves.

I was at that game and was surprised, even uncomfortable, because of the amount of boo's directed at Briere. I even heard a local sports commentator suggest how much fun the fans had in booing him.

Exactly how can anyone have fun boing a player?

Is it just some way to get out your daily frustrations in life?

How can someone be that upset at seeing Briere choose the Flyers?

It is going to get even more difficult to attract Quebec born players because those who've seen Briere get booed will now be thinking that the same treatment would be reserved for them should they sign with the Canadiens and go into a slump.

I spoke with Briere before the game and he admitted that he was lot less nervous prior to the game than he thought he would be. Instead he was concerned, and felt badly, for his family's feelings. He asked me how it was when I played for the Canadiens, in regards to how my family took things. I replied that I had no children at the time.

Everyone says that hockey players of today are nothing but banks on skates. Irregardless, players will always play where it is easiest to earn a living. The Canadiens have yet to prove that they can win, year in year out. 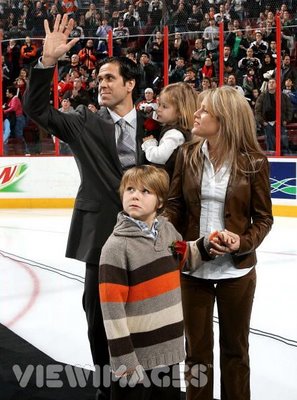 People complain that the Canadiens do not draft enough Quebec born players. Perhaps the Canadiens have learned that it is much more difficult for players from here to find success in Montreal. Not all players are as mentally tough as Guy Carbonneau or Patrick Roy. Look at what is happening with Guillaume Latendresse, and he is just 20 years old.

The fans want a savior so badly. Luckily Carey Price is not from Quebec, fans would be clammoring for Cristobal Huet to be offed on the spot. Already fans are speaking out about the necessity of signing Vincent Lecavalier, and he's a whole two years from free agency!

Before, everyone wanted to play for Montreal. A winning team with a rich history impressed players. That reality has changed.

I find that there is less respect in general in society's whole, and by consequence of course, less respect for the professional athlete. Fans want immediate results, otherwise they turn on the players. It's all about now, now, now.

Everyone needs to be conscious of the effort it would take on everyone's part for Montreal to become an inviting destination once more. It's time to put aside the 1960's and 1970's as a measuring stick. It's a 30 team league now, and players can come from just about anywhere. I'm not sure if everyone can come to this reality all at once.

For now, things in Montreal still aren't what they could be. I don't believe Martin Brodeur one bit when he says he wouldn't rule out finishing his career in Montreal.

So, Desjardins says some interesting things about Habs fans and players alike here, but it is never right to generalize on either. It's often a small portion of fans booing, and another fraction of players being turned off by it. I've always said that if a player needs a gutcheck to play in Montreal, and that if the player is hesitant to sign and has issues with the media, fans, and almosphere - then we don't want you!

What Briere's actions told me, is that he is not a character enough person to cut it in Montreal. In the end, he might have been more concerned about how it would go should this go badly. If his unique focus weren't on things beyond his play, he'd be in the bleu, blanc, rouge now.

The other thing to remember about Desjardins is that he is working in the media now, for a paper with an agenda for stirring things up.

The bottom line for attracting players to Montreal will always be the win column. Once the team has reached contender status, lots of these arguments will be put on the backburner. With each progressive season, the Canadiens discussions with UFA's go deeper each year. As the team's standing gets better, the quality of free agent's the team speaks to and signs will improve. We've already seen a turning of the corner these last few years, and it will continue to be an upward trend as the team progresses towards it's goal.

Often a player simply goes somewhere to be with a friend or ideal linemate. Smyth and Sakic, Briere, Gagne and Biron, are examples of this. It is not that certain players are avoiding Montreal in these cases, it's just that they have their own ideal preferences based on what quality of life they wish to enjoy.

Some players have even blamed snow for staying away.

If Desjardins has further points to make, let him name names. Let him sound off on particular cases.