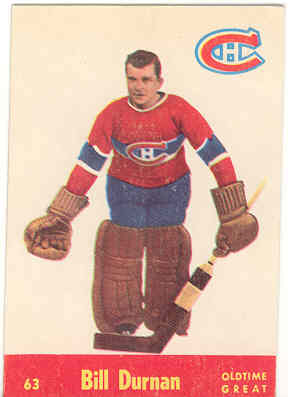 In the annals of Canadiens goaltending greats, the names Plante, Dryden and Roy come up most often, mixed in with occasional nods to George's - Vezina and Hainsworth. A forgotten man amidst the discussion is Bill Durnan, who like Dryden, displayed quality over quantity in his short time as the Habs puck stopper. For those who have witnessed Durnan's prowess, there is little argument for them that he ranks superior.

In a career similar to that of Dryden's three decades later, Bill Durnan entered the professional game at a later stage in his life. While not staying in the game long, he packed an entire career's worth of awards and recognition into his seven National Hockey League seasons with the Canadiens. He won the Vezina Trophy as the league's top netminder an amazing six times, missing out on the award only once in 1948. 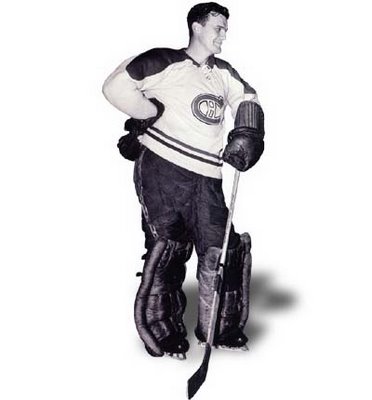 Durnan was unique among goaltenders, beyond his statistical dominance - he was ambidextrous and used two catching gloves to foil and confuse shooters. He also stands alone as one of the few goaltenders in hockey history to be named his team's captain, when in the 1947 - 48 season, he wore the "C" for the Canadiens, in the aftermath of Toe Blake's retirement and prior to the nomination of Emile "Butch" Bouchard.

"It (being ambidextrous) was a tremendous asset and I owe that gift to Steve Faulkner, one of my coaches in a church league in Toronto when I was just a youngster. Steve showed me how to switch the stick from one hand to the other. It wasn't easy at first because I was so young and the stick seemed so heavy. But Steve kept after me and gradually the stick became lighter and I could switch it automatically." It wasn't a natural thing for Durnan though. A natural rightie, he worked very hard at it under Faulkner's tutelage. He became known as Dr. Strange-Glove. 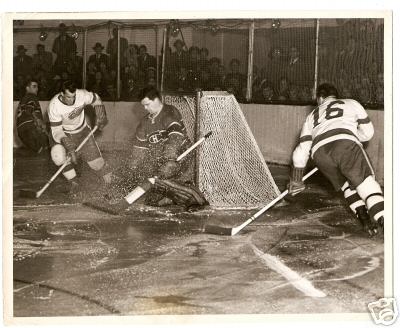 "His idea of switching the stick hand really impressed me when I played against better teams, since the goalie always keeps his catching hand out toward the big part of the net," said Durnan. "At first it felt as though I was transferring a telephone pole from one hand to the other, but after a while I'd hardly realize I was doing it. Soon I noticed the opposition was unaware that I was switching hands, and later on when I was in the NHL it often took years before the other guys knew I was ambidextrous." 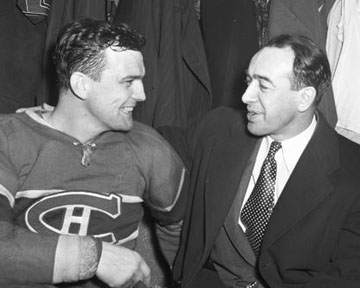 Durnan was originally property of the Toronto Maple Leafs, but he was released because of a bad injury. As a result, Durnan was devastated and basically gave up.

"When the Leafs found out about my injury they dropped me and I vowed that even when I got better never would I play pro hockey. I was disillusioned and figured if that was the kind of treatment I was to get, then hell, I didn't want any part of it. Besides, there wasn't much money involved; in those days they weren't paying anywhere near the money to be had today. So, I quit altogether. Playing in the NHL was about as far from my mind as swimming on Mars." 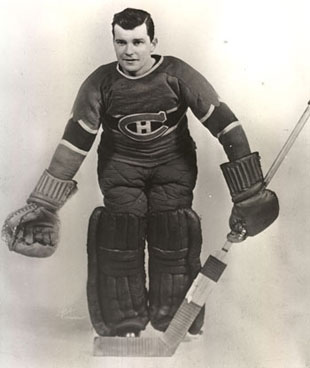 Durnan moved to Kirkland Lake and got a job at the local gold mining mill in 1936, and began playing in a northern Ontario league with the Kirkland Lake Blue Devils. After four seasons with the team, he backstopped them to the Allan Cup championship in 1940. Friends in Montreal convinced him to take a job with the Montreal Royals following his success with Kirkland Lake, and he took a job in the accounting department of Canadian Car and Foundry Company.

After three years in the Quebec senior league he finally caught the attention of a National Hockey League team when the Montreal Canadiens began noticing the goalie star in their own backyard.

"My boss was Len Peto, who was also a director with the Canadiens and a man who knew his hockey. I hadn't given the NHL a second thought, that incident with the Leafs was still sharp in my mind and I never wanted to go pro. Money wasn't a problem any more, I had a good job and was making a little extra from the Royals, so everything was just fine when Peto started pressuring me to sign with the Canadiens." At this time Durnan was 28 years old, and about to finally embark upon his NHL career. 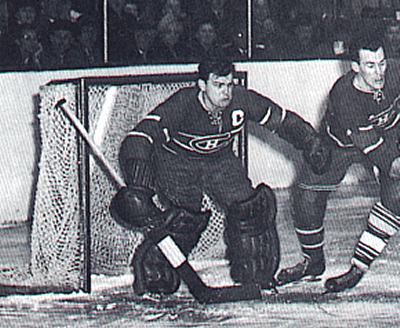 Up to that point, Durnan had earned at most $15 per week between playing hockey, softball and doing working at the foundry.

"I wasn't ordered to sign, but there's no question that some stress was put on me, which I resisted at first. Somehow I managed to hold out until the day of the opening game and got the Canadiens management to give into my wishes. I signed for the huge sum of $4200 and found myself on a hockey team just beginning to gel."

Canadiens manager Tommy Gorman, was known to drive a hard bargain when it came to negotiating contracts with his players. At the Habs training camp in 1943, he settled on Durnan as his goalie, but the amateur didn't make it easy on the general manager. Durnan proved to be a tough negotiator, saying he was happy as an amateur and happy with less money if it meant avoiding the stress of the professional game. 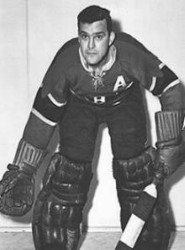 On opening night, the goalie still wasn't signed. A mere 10 minutes before the first faceoff, he negotiated a deal with Gorman when the Montreal GM finally mumbled the figures Durnan was waiting to hear. He signed his name to the contract and ran down the hall to dress for the game. The ink was hardly dry on the signature when he finished his debut, a 2-2 draw with the Boston Bruins. Incredibly, the rookie netminder was a few months shy of his 29th birthday. 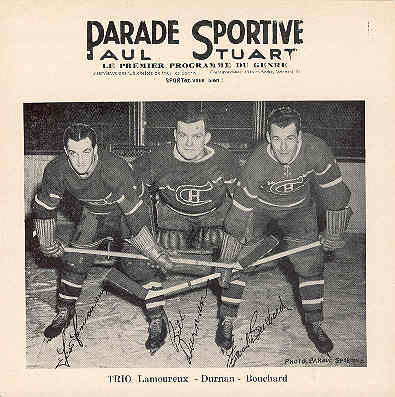 And gel they did, that first season the Canadiens had the offensive services of the Punch Line - Elmer Lach, Rocket Richard and Toe Blake, but it was the often spectacular play of Durnan that took Montreal back to the Stanley Cup after 13 years of frustration. Durnan led the league in games played, wins and goals against average in the regular season, and the playoffs, when he allowed only 1.53 goals per game. Durnan was awarded the Vezina Trophy, the first rookie to win the award, and was selected to the league's First All-Star Team.

Durnan merely played in all 50 of the Canadiens game, winning 38, tying 7, and losing 5 in what was is highly regarded by NHL experts as the Habs greatest season. In it, including playoffs, Durnan lost only games in total, but despite the stellar numbers, the Calder Trophy was awarded to the Maple Leafs Gus Bodnar, who as an 18 year old, notched 22-40-62 totals to rank tenth in the league in scoring. 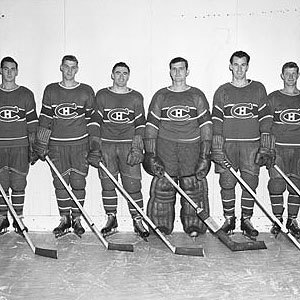 It's hard to imagine anyone having a better four year introduction to the NHL than Durnan's. He won the Vezina Trophy for the four consecutive seasons and cemented himself on the First All-Star Team. Montreal won the Stanley Cup again in 1946 and finished first in the league after the regular season each year. Durnan suffered his only losing season in 1947-48, the one in which he was named captain. For the first and only time, he didn't lead the league in goals against average and Montreal missed the playoffs. Durnan returned to his winning ways in 1948-49, setting a modern league record with a shutout streak that lasted over 309 minutes and four games. In the next two seasons he was once again the best goalie in the league. 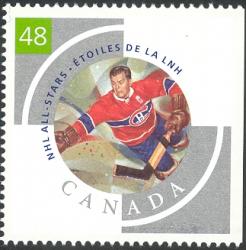 Durnan was an easygoing man, friendly and calm, but over time the stress of playing and the mental and physical toll of so many minutes and games between the posts began to wear him down. In 1950 he abruptly retired from the game at the age of 35, while still in his prime, and went on to coach Ottawa of the QMHL.

Although his career lasted only 7 seasons, it was long enough to earn him top consideration as perhaps the greatest goalie in hockey history. He won the Vezina trophy in his rookie season, and would win the Vezina every year he played in the league except one. He was a 6 time First Team All Star and led the Habs to two Stanley Cup championships. 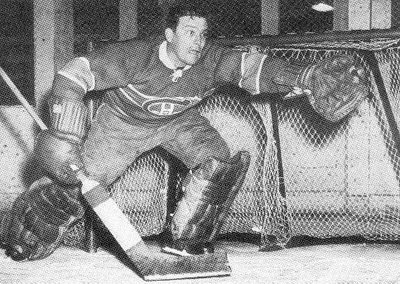 In 1949 he set the modern record for consecutive shutouts with 4, as he played over 309 minutes of NHL action without surrendering a goal. The record stood until Brian Boucher broke it in 2004.

Durnan left the game he loved because of the pressures involved in tending the net.

"Hockey started to get rough for me at the end of the 40's. I had broken my hand and after it mended it felt as if my arm was falling off whenever I'd catch the puck," said Durnan. "One of my main reasons for chucking it all was because the fun was going out of the game for me. A lot of my old pals were leaving - or had gone - and much of the camaraderie was missing."

Durnan also cited the money as a reason he got out of hockey.

"My reflexes had gotten a little slow and, besides, the money wasn't really that good. I'll admit, if they were paying the kind of money goaltenders get today, they'd have had to shoot me to get me out of the game! But at the end of any given season when I was playing I never seemed to have more than $2000 in the bank, so I wasn't really getting anywhere that way. I wasn't educated and I had two girls to raise."

Things came to a head in the 1950 playoffs against the New York Rangers however. The Rangers were on the verge of an upset when they had the Habs on the brink of elimination 3 games to 1. Durnan pulled himself from the series.

"I was afraid I was blowing things. I really wasn't, I guess, but we hadn't won a game and I didn't want to be blamed for it. And I felt I wasn't playing as well as I did in the past.. The nerves and all the accompanying crap were built up. It was the culmination of a lot of thinking and I realized 'What the hell, I'm quitting and this is as good as time as any'"

Gerry McNeil stepped in and finished the playoffs.

"A lot of people thought it was a nervous breakdown but it wasn't. To this day, people still won't believe me."

Bill Durnan died at North York Hospital in Toronto on Halloween, October 31, 1972, where he had been a patient for a week. His health had been uncertain for several years.

Durnan was inducted into the Hockey Hall of Fame in 1964.