A Win To Build On

Share All sharing options for: A Win To Build On 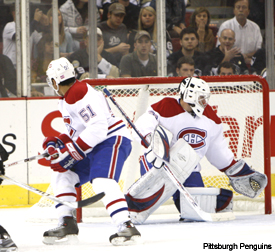 Never would I have gone out on a limb and predicted the Canadiens would return from a season opening three game road trip with a possible 5 out of 6 points.

Impressed - of course! Surprised - only a little!

If you read this space regularly, you'll know that I have been very high on the current edition of this team for quite some time. Damn the pundits who suggest the Habs are a non playoff team. A few more wins and they'll be scratching their heads in unison.

Big bonus points to coach Guy Carbonneau for astutely managing the players changes brought forth in this game, especially for having the steel gonads to bring in Carey Price for his debut against the Penguins.

A little guts. A little clarity. No sweat!

The Habs are now returning home, and have surely the earned huge rousing applause they will receive at the Bell on Saturday.

Some encouraging points from last nights game, other than the play of Price, is the continued involvement of the teams fourth line. Begin, Dandeneault, Chipchura, Smolinski, and whoever else rolls into that rotation has done such suberb work in the first three games that it has allowed Carbonneau much freedom to match lines more effectively.

Best of all is simply beating a team as good as the Penguins, who are promised a great future. I see the flightless birds contending in a year or two. I see the Habs in their path, like a detour in the road.

The only regret for tonight's game was the absense of fireworks in regards to personal battles. Maybe it's just too early for either side to lose their cool in this budding rivalry.

This win, and this road trip, have surely done wonder to build the Habs confidence. I'm sure we are but another game of the sort away from hearing Chris Higgins say, "We believe we can beat any team in the league!" 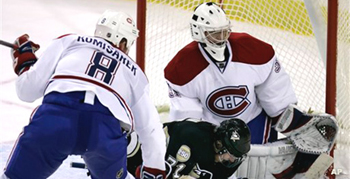 14 - Plekanec: Tonight was the Tomas Plekanec from last season's first game, in a sense. Given linemates he can make better use of, he demonstrated the confidence he'd gained last season. This was one game where I also found he wasn't tripping over Kovalev at every turn. Nice goal also - who knew he could unleash such a wicked wrister?

21 - Higgins:The Habs best player two games running, Higgins pulled some moves out of nowhere last night that had me sitting straight up. Although he's yet to hit the net, I feel like I'm watching last season's revelation reveal new layers to his talent. Perhaps the late start to camp explains his lack of finish presently, but he is creating many of his own chances by being absolutely relentless.

22 - Begin: An inspiration on every shift, bringing a warrior's intensity to the penalty kill. Sometimes I think Begin is a closet masochist. He's made the Habs fourth line a concern for other team coaches and forcing them to shorten their benches much earlier than the norm.

31 - Price: Under heaps of pressure, Price reveals himself to be the real deal despite sprinkles of skepticism. This performance will go a long way towards erasing some of the controversy brought on by thinkers who assume his rise to the bigs is too soon. The kid just oozes a "what-me-worry" coolness that can only be reassuring to teammates. After the game, it was hilarious watching him bounce questions from impressed reporters querying for a big quote with uncanny nonchalance. He could be faulted on neither goal he surrendered: the first being piled under Crosby after Hamrlik shoved him there, and the second resulting from a nifty cool deke and backhand pass from behind the net by Malkin. Another impressive facet of Price's game is his swiftness in handling the puck to begin the clearing of the zone. There were some miscues at times, but communication should ironout the bumps. Once Price gets this in synch with his defenseman, team will be much less prone to dumping the puck against Montreal. For a team with defenseman who can fold fast with the right puck pressure, this is damn good news.

79 - Markov: Never ceases to amaze with subtle details and new wrinkles to his talent. Displayed an All Star command of his game and a knack for choosing the precise time to step into the play and make a difference. I'm almost ready to lay it on the line and wager he'll score 15 goals this year. You know things are going well for your team when it's Russians are earning their money! 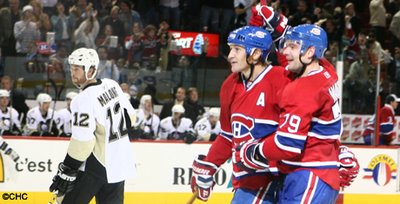 27 - Kovalev: A third straight solid game for Kovy and nobody is screaming to trade him yet. I found him using the whole of the ice and making better play selections to create his own chances. He's not swallowing the puck as he did last season and is hesitating much less in the offensive zone. Kovalev being Kovalev, he still makes the odd bonehead move trying to impress himself, but as long as he's pointing and the team wins, his err's will be glossed over. One thing I haven't seen very often - Kovalev behind his own net dishing out 3 or 4 good body checks. Committment such as this to the team concept is making me almost absolve him of last season's disastrous mess.

46 - Kostitsyn: Watching the game a second time, on this morning's Mini Express, Tits became more apparent. He fired a bunch of quick shots, was rightly place to be either Kovy or Plek's foil on rushes, and used his size to muscle the puck along the boards. At some point this season, this kid and this line will put it all together and it will be a thing of beauty. His toughness has been tested a few times this season and he's passing while being given a beating. Once he learns to instigate the bruising rather than letting it find him, he will flourish.

51 - Bouillon: He was surprisingly efficient tonight and brought increased combativeness while winning the majority of his battles. Was quite above himself clearing the zone. My question begs: Why isn't he this sharp on a steady basis? 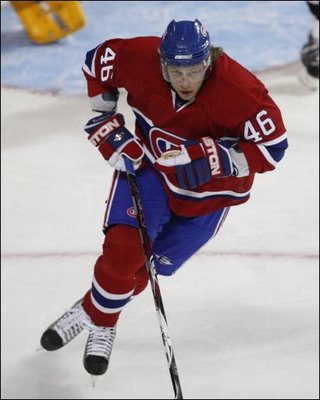 6 - Kostopoulos: Seems to be coming around as a fine role player on the team. He was persistant on the boards, forcing turnovers, on top of the puck carrier all game. Doesn't seem to have an ounce of offensive flare though he does work dilligently. Brings the required essential grit to the bottom lines and played another solid defensive game. He continues to be in the lineup do to work ethic.

8 - Komisarek: Made a game saving play on Malkin late in the game but is still experience some rough edges. Perhaps it is the growing pains of increased ice time and duties, while chasing down the oppositions best each night that seems to show him as flatfooted on occassion. His limits are tested against the likes of Crosby and Malkin, and he has to be careful of wanting to do too much at times. Komisarek is learning the difference between what it means to be physical and how to contain himself to being a presence in lieu of overcommitting zestfully to all in his gaze.

11 - Koivu: Played a sound two way game and won some key faceoffs in the Penguins zone. Away from the puck, he's doing some fine work that has been creating space for Higgins down low. The line Koivu mans is nifty around the net for chances, but may be playing too close together to create 5 on 5 chances. With Ryder, they are best to learn to spread out some rather than continuously crash the net. While their play is always good for a goal a night, it needs new ricks to break out and have bigger games.

20 - Smolinski: Mr Versatility is enabling Carbonneau to effect subtle line changes while manoevering the trios to fit the game flow and line matching. He plays tough and hits but has the odd mental lapse. I didn't much like seeing a veteran of his experience ice the puck late in the game when options were wide open to him. That's a small stain though, on an otherwise very good night.

25 - Dandeneault: Adapting to his forward role better with each game and is starting to create more scoring opportunities.

28 - Chipchura: After initial nervousness he settled down and played a sound first game. I think this kid is a keeper. He hasn't the greatest speed, but seems to always be exceptionally well placed, while playing within his limitations. I've noticed that his addition to the lineup, at the expense of Grabovski's subtraction from it, enables a better definition of line duties. The third and fourth lines were given more precise tasks tonight, and they excelled due to the flipping of Plekanec up one line and the subbing of Chipchura for Smolinski on the fourth. It enabled the coach more possibilities against a fast moving team.

32 - Streit: A small drop in execution in regards to zone clearing in this game, but nothing to be too concerned about. He played a minimalist game, choosing to be more positional than adventurist against a fast team.

44 - Hamrlik: Solid, unspectacular, and increasing effective. Brings a great calm to the Habs D, but I'm left wondering why a player of such attributes is costing the Canadiens such a large sum. Would be advised not to dump opposing forwards onto his goalie.

73 - Ryder: His best game of the season so far and I've noticed that he is learning to choose more cautious puck placing options. He's adapting to the notion of dumping over adventure when cornered, and that's a good step. Now if he can only learn to protect his puck better and not stickhandle so openly exposed. His grit was cranked a notch last night and his body was getting in opponants paths with regularity. Perhaps he was jazzed and inspired by Higgins having turned into a whirling dervish for the night.

84 - Latendresse: His recent examination of conscience seems to have served him well. More focus and committment were evident from the first shift on. Clearly he is less lost in the wilderness playing with Smolinski and it was good to see him being heavy on the puck and dishing hits again. What is appreciated most about him right now, for me, is the fact that he has the mind to recognize how much he sucked in the first two games and the balls to admit it. As long as his implication continues to shift upwards, he'll keep his seat on the team bus.
SHADES OF GREY

26 - Gorges: Had a rough time of it in the early going and should have performed much better overall given that he's fresh off playing his best pre season game against this same lineup. His poise and coolness need a regular role to blossom beyond this. Had moments where he didn't even seem to want the puck, he dished it off so quickly. A few times, he got caught up ice and forwards such as Koivu had to cover his lapses. He'd better learn to shake off his jitters sooner or he will not remain in the team's long range plans much more.

Thankfully, no one deserving in this game.