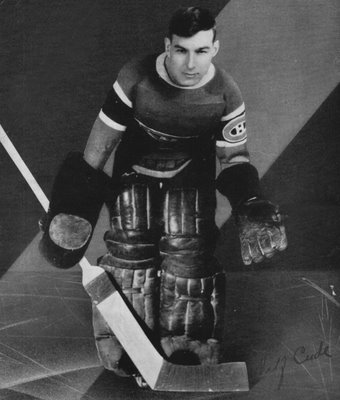 Wilf Cude once had the unique distinction of being the NHL's spare goaltender, playing for whatever team required a backup. He may also have been the lightest goalie in league history, tipping the scales at no more than 130 pounds. On September 27, 1931, he was signed by the NHL to act as a utility back-up goaltender for the 1931-32 season after his previous team, the Philadelphia Quackers, suspended operations.

Cude was born in Wales, learned to play hockey as a youngster growing up in Winnipeg before joining the Melville Millionaires of the Saskatchewan Senior Amateur Hockey Association in 1929. 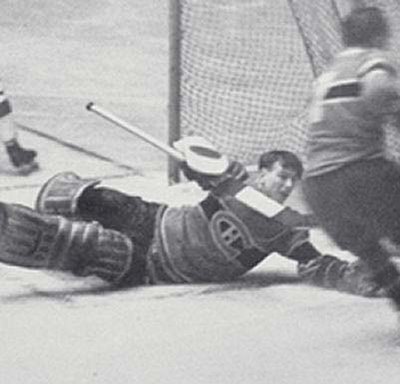 In 1934, Cude began the new year with the Detroit Red Wings, on loan from the Montreal Canadiens who had aquired him in a cash trade with the Quakers earlier in the season. With Detroit, Cude posted his best career numbers going 15-8-6 in 29 games, with a 1.52 GAA. Over the next six and a half years in Montreal, Cude would win 73 games, mostly during the Canadiens leanest years. 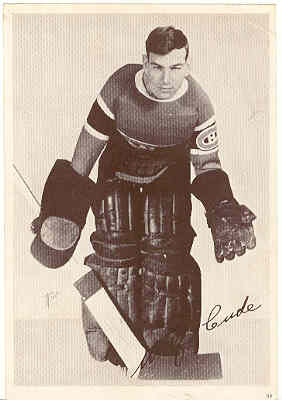 Cude was an all-star before the game became an official event in 1947. Born July 4, 1910 in South Wales, he played 301 games between 1930-41 for five NHL teams, including the Detroit Red Wings and with the Canadiens he took part in the 1937 and ’39 memorial games to benefit the families of teammates Howie Morenz and Babe Siebert.

At 135 pounds, Cude surely was the smallest man to ever tend professional goal, and was used as a spare throughout his career, loaned to whichever one-goaler team was suddenly in need of a netminder.

He lost both all-star appearances, 6-5 and 5-2 decisions, though it’s unlikely they factored into his unique way of deciding when it was time to retire.

Cude was sitting to a post-game dinner with his wife, his nerves more raw than his steak, when he picked up the meat and hurled it across the room, plastering it to a wall.

Legend has it that the goalie said, "If the steak comes down, I’m through."

Cude was an ex-goalie an instant later when a slab of sirloin hit the floor.

After his NHL hockey career ended in 1940, Cude acquired private ownership of the distributing agency in the Rouyn-Noranda area for British American Oil. Cude died after a lengthy illness on May 5, 1968, at the age of 57.