The Trouble With Lopsided Wins

Share All sharing options for: The Trouble With Lopsided Wins 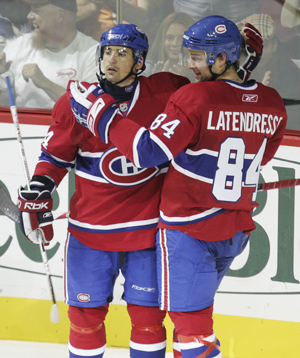 As everyone did, I enjoyed the Habs pounding of the Hurricanes last night.

Thumbs up to a killer power play and a four point game for Tomas Plekanec. Kudos to the toughness of Tom Kostopoulos and Francis Bouillon. Props to Alex Kovalev, who remains motivated and played his 1000th career game like the player I want him to be. A big high fiver to Kyle Chipchara for showing why he has become a regular while making the Habs fourth line a going concern for opposing teams.

Hey, I hate the Hurricanes as much as anyone - maybe more, so there was alot to like about this game.

Unfortunately, beneath the glitter of a half dozen highlight reel goals and a running up of the score was one ugly performance that showed the team still needs to mature.

Hockey is sometimes a game a that would perplex even the most astute of sports psychiatrists. Teams have a bad minute or a rough shift in a certain game and it costs them. A good example is last weeks meeting with the Florida Panthers, where 58 good minutes of excellent hockey wasn't quite enough.

Last night against the Hurricanes, roughly 20 minutes of good play, led by a killer PP unit, sufficed for a win.

For the remainder of the game, the Habs were butt ugly, and that is exactly where they might have been bitted were it not for a break or two.

Considering that this season Habs are young in experience, and playing with large leads is not a common occurrance, they are not used to dealing with what needs to be taken care of in games such as these.

When it comes to blowouts, "often" is a word they seldom use.

There are two points of view in how teams should go about duties when entering the second period with a 5-1 lead. The teams who are inexperienced, are loaded with players seeking to pad their stats. Experienced teams know better, and look to bag the two points by throwing a blanket over the opposition.

You don't see the Detroit Red Wings blowing 5-1 leads, that's something the Maple Leafs do. There are many reasons why. 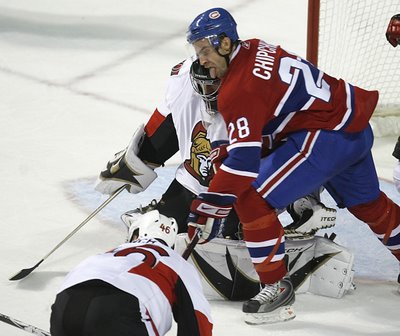 The 1970's Canadiens used to drive my father right nuts, sitting on leads and subtly dumping endless pucks down ice and controlling the flow of the game. By playoff time, the discipline was perfected.

Does it make for dull hockey?

Of course it does, but that's beside the point - which is the two points.

The Canadiens should pour it on, and put the other team away, you say.

That has already been done. The score is 5 - 1! Stick a fork in the 'Cane's butts and turn 'em over - they're cooked!

The team is playing on the road and doesn't have the last line change. There is no need to entertain the fans as they are not playing at home. The Canadiens have another game within 24 hours, so it was time they shut this one down.

I've had the pour it on versus shutting it down argument for years with everybody from my father to other hockey coaches I have been associated with or had known while coaching.

Often the misconception of the pour it on method is based on the fact that the same 1970's Habs teams were equally adept at both. They could run up the score, or turn the bore into a snore.

Both ways worked wonders, but it was the hypnotism of dullness that was preferred come playoff time.

I recall the fifth game of the 1979 Stanley Cup playoffs against the New York Rangers as the ultimate snorefest in the ultimate game. The Blueshirts came out guns-a-blazing, having their backs to the wall facing elimination. It was Rangers coach fred Shero's style to create and provoke anything, and the Habs sat back, ate them up, and spat them out. Once they had a 4-1 lead, the Canadiens let the Rangers chase dumped pucks for close to 40 minutes. By the third period, the Rangers simply gave up, ill equiped to beat the impenetrable wall the Habs had set up.

No one likely remembers this game as a benchmark of great hockey. Fans do recall that the Canadiens won four straight Cups.

Just as winning the Stanley Cup was the objective in that particular game all those years ago, winning the two points last night isn't at all disimilar.

There's no need to remind anyone that these boys ain't the '77 Habs by any stretch!

The point in matter of proceding is all about that singular objective. Fashion points for stylishness of wins matter little in the end.

The current edition of the Montreal Canadiens needs to learn the distinction.