A Thing About Character

Share All sharing options for: A Thing About Character 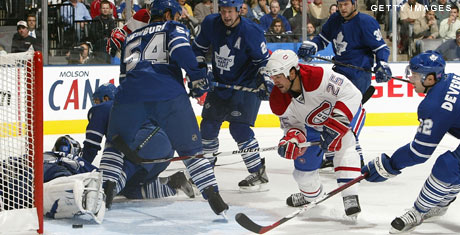 Beyond the thin silver lining of gaining an overtime point in this 4-3 loss to the Maple Leafs, a trend has become apparent from game 2 this season and game 82 of the last. The Canadiens have an inability to sustain their leads against never say die teams such as Toronto. The process of gaining the knowledge of how to go about it, is what experience is all about.

The word character is often brought forth to describe teams, such as last nights Leafs, who are able to come from behind and snatch victory from the throes of defeat. But character is the wrong word for teams coming back in such manner. The proper word would be determination.

Character is something else altogether, and that is what the Canadiens were lacking last night.

My more precise definition of hockey character is an ability to gain the lead and forcefully maintain it throught smart play choices and discipline. This is what the Habs are failing to learn at present. It involves learning the more subtle details of where to dump pucks in the third period instead of making one on one plays, the cutting back on the verbal smacktalk in traffic and at whistles, and a team committment to steadfastly refusing to have it's mindset corrupted in the latter stages of the game in which they are leading.

The Canadiens will not learn this type of character overnight. It is a process that is most often taught through losing in this manner. The mistake is in thinking that a 2 goal lead must be pushed into a 3 goal spread. Experience teaches that you can't push it and that opportunities are further created at this stage in the game with poise and patience. The calibre of parity in the NHL makes putting an opponant to bed by the second period almost unthinkable anymore.

The Canadiens and Maple Leafs are two very evenly matched teams, as recent scores and outcomes have shown. The Habs ought to know that the Leafs are never out of it for long, and they should prepare in consequence. No games between these rivals will be won in the second period.

Seeing as Montreal has shown a failure for sealing the deal, I almost prefer to see them trailing after two frames. A lesson should be taken here.

For the marks on this game, I admit it would all have changed with another notch in the win column. It looked that way late in the second period and I am not consoled by the team grabbing an OT loss point for the simple reason that these don't exist in the playoffs.

My take on this game was a distracted one and it needed to be watched twice to fullfill what I sought to post. A thanksgiving supper interrupted my focus during the live game, and watching the tape on this Sunday morning after working my 11 to 7 shift while carrying the bitterness of the loss surely helped evaporate what was for 36 minutes, a very sound game by the Habs.

If that last thought is not felt in these ratings, it is only because of the final outcome mattering in my eyes, as it does in the standings.

I accept that I'm being a touch harsh. 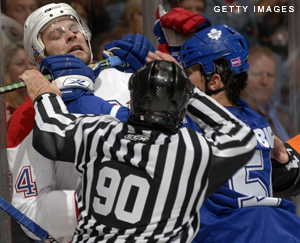 21 - Chris Higgins: The way he gets up for these Leafs matchups, you'd assume Higgins was raised in Laval with a chip on his shoulder. He brought it again tonight and hope to see him on the A unit of every penalty kill.

22 - Steve Begin: Brought his trade mark intensity again tonight and is helping make the Habs fourth line a fear to be reckoned with.

25 - Mathieu Dandenault: Goals from unlikely contributors are always welcome and Dandeneault's versatility is proven to be an asset to the team.

27 - Alex Kovalev: Two games in and I'm not worrying about him as much as I thought I would be. He displayed the type of dedication that fans use to gauge his contribution in a positive light. He was a inch away from being the name on everyone's lips this morning.

32 - Mark Streit: Impressive again and should be Hamrlik's partner rather than Brisebois. This notion might lead to how thick we gauge Carbonneau's skull to be.

46 - Andrei Kostitsyn: Showed his talents in many ways again. It's easy to forget that he only about 40 or so games into his NHL career and has tons to learn. The purety of his gifts absolves much of his weaknesses but he has all of the tools to be the Habs go - to player in a few years. Throwing shackles on him for occasional slips of conscience defeats why we need him so badly. He's scoring and creating chances - let's not ask him to be anything other than what he is for another year.

6 - Tom Kostopoulos: I can't say I notice him as much as I'd wish. I understand what he brings. I understand I must learn to live with his limitations.

8 - Mike Komisarek: Played an average game but has to learn to adjust to having a virtual target painted on him. Opponants are learning that at certain times, like Markov, his skin is thin. Both serve the team best by being on the ice. It takes 4 defenseman to kill off a penalty and when either he or his partner are off, we are forced to use Brisebois or Bouillon when we'd rather not.

11 - Saku Koivu: Plain and simple, for the most part, Koivu was shut down tonight. One thing is grating on the nerves though - "C" on the chest notwithstanding, should the veteran of the team be lured into taking an overtime penalty. When Koivu begins to exemplify greater discipline, the team will follow.

14 - Tomas Plekanec: He's hardly the center I've come to appreciate with Latendresse and Kostopoulos as linemates. Any evaluation in his present circumstances remain a trying one.

20 - Bryan Smolinski: He's doing what he is supposed to do as a fourth line player, and he's only going to become better once accusted to new surroundings.

44 - Roman Hamrlik: Confidence and poise are settling in and he is playing a confident game. Hamrlik strikes me as the type of steady player whose rare mistakes will be more evident than his many subtle attributes.

51 - Francis Bouillon: It would be too easy to launch a dart at cube for certain mistakes, but why is he on the ice against Sundin in overtime?

54 - Mikhail Grabovski: Is proving to be the reincarnate of Russ Courtnall in traffic. Too chevreuille and not enough bull.

71 - Patrice Brisebois: One step up, two steps back. To me he seemed a different defenseman than on Wednesday. Another preformance like this, and Habs fans will be asking, "Will the real Patrice Brisebois please sit down!"

73 - Michael Ryder: Same old story, invisible when not scoring. There will be games when I have alot to say about Ryder, but this was not one of them.

79 - Andrei Markov: What is it that Markov says and does that gets players so keened on being in his face. Of course, it is his undisputable worth to the team that makes him an opponants focal point. Markov must learn that he attracts a negative vibe with certain Claude Lemieux-isms, and that it also draws teammates into the fray. Despite a key goal, he played an average game and like many players of talent his boobs get magnified.

39 - Cristobal Huet: I'd noticed in the Carolina game that Huet was sloppy handling the puck and it worsened against Toronto. His mistakes opened doors he couldn't close fast enough. Oddly, this is an area in which Carey Price is vastly superior and I wonder if that if one Huet's mind as he roams. He has to pick his spots much better and exercise more caution and communication.

84 - Guillaume Latendresse: One bad game is a common occurance. Two are cause for concern. Three will be qualified as a coma. Tell him the season has started please. By next weekend, Latendresse will be meeting a smiling Maxim Lapierre at the airport.