Price Gears Up For Flightless Birds

Share All sharing options for: Price Gears Up For Flightless Birds 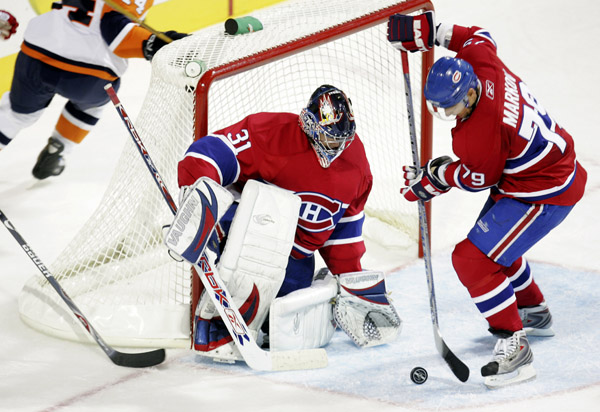 Canadiens coach Guy Carbonneau confirmed Tuesday that rookie goalie Carey Price will be given his first start against the mighty Penguins Wednesday.

It's a logical move by Carbonneau, as Price had seen action against the Penguins in preseason.

Other lineup changes include inserting Josh Gorges into Patrice Brisebois' slot and subbing Kyle Chipchura in lieu of Mikhail Grabovski. Chipchura will be centering the Habs fourth line, and centers Tomas Plekanec and Bryan Smolinski will be bumbed up in the order down the middle.
When asked if Price was a possibility for the Pittsburgh game, Carbonneau simply stated that he didn't "want him remaining inactive for two or three weeks."

Upon journalists noting that the team was in fact entering its second week of the season, a sly grin crossed carbonneau face as he turned to head towards his office.

Carbonneau surely made his mind up to start Price against Pittsburgh as it would be seen as a testing of the highest order. Cristobal Huet was not at his best on Saturday but logic simply dictates that he should still start the team's first home game against Carolina this coming Saturday.

I have to agree, after seeing Huet play so well against the Hurricanes last week.

In consequence, if Price had not been given Wednesday's assignment, it would have meant that he had not seen action in over two weeks since playing the third period against the Senators September 29th.

During yesterday's practice, Price was put through the rigors taking shots from all situations and was severly tested by teammates in a breakaway drill.

Carbonneau placed the net ahead of the goal line a good distance in order for Price to have less reaction time for each breakaway.

That's a curious idea Guy, but why not just have the players file in from the blueline? 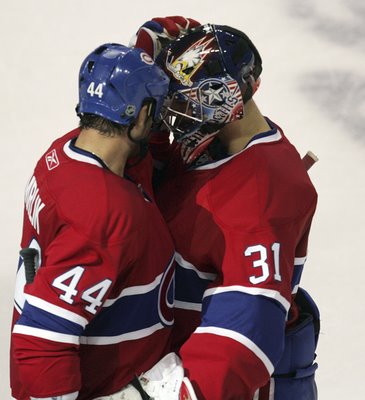 During the scrimmage, Price had to remove his mask for all the snow he was wearing and clear his eyes, due to players turning on the brakes so close up. He had a good sized bruise after practice, a souvenir from a Bryan Smolinski drive.

"You should see the puck marks on my legs", Price suggested afterwards.

Price was hardly complaining about the treatment, far from it.

"These workouts with NHL players are very profitable to my progression - as much as an actual game", he explained. I got to see a whole lot of good shots, and I had Rollie Melanson at my side to analyze my work, such as feet movement and covering angles."

"I won't hide it - I'm real anxious to get into a game. It's a little different for me this season in that in the past I played the majority of my team's games.

Price cannot ask for a better test than Sidney Crosby and the Penguins. He's not the type of young man to worry about such a challenge. He is rather stimulated at the thought.