Maxed Out And Slighted

Share All sharing options for: Maxed Out And Slighted One has to feel for Maxim Lapierre, who has been sent down to the Hamilton Bulldogs by the Canadiens yesterday.

The demotion must feel like a slap in the face, taken in a certain light, and if I get a sense of the kid's inner determination and guts, he shouldn't be there too long.

I like Lapierre for a whole slew of reasons. I think he brings an element to the Canadiens that few others can bring, in that he is an irritant of the highest order, able to get under opponants skin and get them off their game. There's a brash eagerness to his play, being that he is the ideal third or fourth line player who can alter a game's tempo with an inspired shift or two.

In all fairness, Lapierre has had an average camp, and may need larger chunks of Bulldog ice time to find his game infull stride. 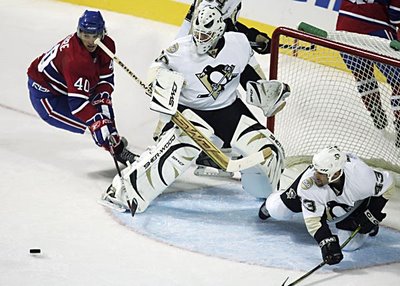 On the flipside, here we have a young talent, who was an exemplary leader of his youthful pack last year. He is as proud as any player to throw the CH over himself and head into battle.

Over the summer, he was one of the team's choices to model the Reebok jerseys and perhaps got to feeling just a triffle too secure.

Going back to last season, Lapierre was induced with a great sense of duty by the team and fans. After a surprise midseason call-up saw him score 3 goal in four games, he was returned to the Dogs within a week.

The move ignited a fury amongst fans. They lit up phone lines as the debate over whether it made sense or not for the Habs, under cap straights, to move a hot hand at the time. The fires were pissed out as the Canadiens brought him quickly back at the next opportunity. His play having cooled some, he made another brief Hamilton stint, before arriving back with the Habs to stay. 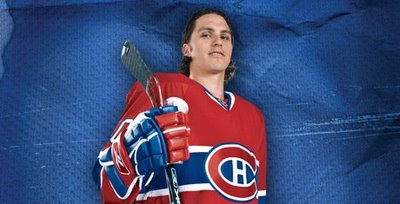 Or so it seemed.

According to Lapierre, when the Canadiens were eliminated from the post season, he let management know that he wanted to pursue his season and help the Bulldogs go as far as they could in the AHL playoffs.

From the first playoff date, until the final one, Lapierre was a dedicated leader taking on all the dirty work of defensive roles for the Dogs. Had Carey Price not been named playoff MVP, Lapierre would have been a worthy and popular choice for it.

Now I've never heard of an AHL Cup hangover, stunting and slowing the progression of a player at this level like it tends to wear on older gamers after a Stanley Cup run, but one has to admit Lapierre played an awful lot of on the edge hockey games this past winter.

Being all of 22, and crashing into the Habs lineup, before hoisting the Calder Cup must result in a cumulative head spin.

Think about it! Training camp is about to begin and the Habs annoint you as an off season merchandise poster boy. You're feeling pretty good about yourself, head all in the clouds, right? 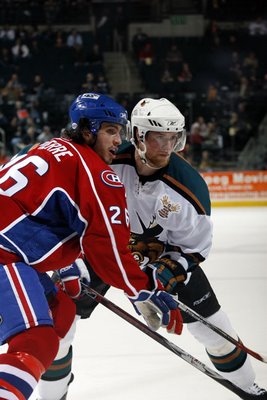 Lapierre then plays poorly in a handful of exhibition games, likely figuring he's got his niche on the team carved out nicely based on his dual contributions in Montreal and Hamilton.

If he were a grissled veteran, perhaps he could be blamed for taking the pedal slightly off the gas.

But he's a young impresionable newcomer still, and the Canadiens likely want to cut complacency off at the path by throwing a fork in the road.

After Lapierre learns why the team prefered not to cut him any slack, and understands it, he'll become a better player for it.

Right about now, having seen Mathieu Dandenault (a seventh D-man, crying out loud!) and Garth Murray edge him out in the Habs esteem, Lapierre should be about ready to combust.

This has to get Lapierre right in the pride.

Here's hoping he was sat down in both Gainey's and Carbonneau's office for a long hard talk, and that he left with an unequivocal belief that he remains in the team's best sights.

With his work ethic as his best friend, he should be back before long.