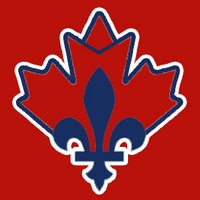 There is a very fun site called "NHL Tournament Of Logo's" that you have perhaps seen before. It seems it was created for those curious about the initial Reebok designs that many have come to shudder at and despise.

They feature polls on what readers feel are the best jersey's and logo's and fans submit new design ideas to be implemented into NHL designs. Most of it amateurish, yet fun to look at. Lots of it is also just plain dumb.

However you feel about it, the site is a daily eyefull where imaginations run wild. It's a wonderful place to visit if you've run out of content to read and wish to see how others with much more time on their hands spent it!

Every so often, someone gets the idea they can improve on the game's best jersey ( you know the one! ) by adding some little tweaks here or there.

The shoulder patch idea pictured above, was one fan's idea to incorporate the two solitudes onto La Sainte Flannelle.

Of course, we know that ain't ever gonna happen! 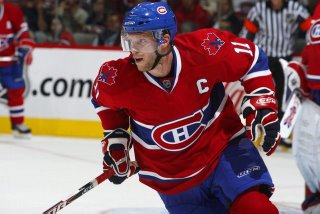 The person submitting the idea did have some logic behind the creation, wishing it to be an inclusive rather than exclusive notion. The creator explains:

"There's two motivations behind it. One is political - the Fleur De Lys within the maple leaf clearly shows Quebec as a part of Canada, and not a separate entity. However, using it as the base of the maple leaf is symbolic of the fact that the true Canadian identity requires a strong Quebec. The other reason is to honor Quebec's former NHL team, the Nordiques, who proudly displayed the Fleur De Lys on their jerseys. Despite the rivalry between the Nords and the Habs, the NHL in Quebec City was great for the province and the country."

Spoken like a true person who's never lived while the rivalry raged!

On another hand, it seems spoken from someone who has a true love of their country - nothing wrong with that!

First off, the map of Canada "clearly shows Quebec as a part of Canada". Unless you're some brainwashed separatist, you don't see it any other way. The symbolism of the patch is fine for Nationalists, but why make the more rebellious factions writhe?

The word ''canadian'' is derived from the same meaning the reader is getting at. It is based on the Indian word "kanata", which means a group of people, different in origin, working for a common goal. 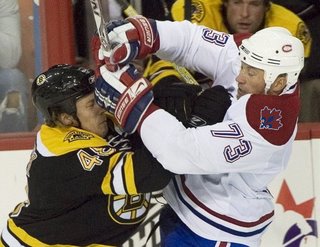 Let me state just quickly that the distinct society term drives me nuts, for one thing. Anyone who has spent the time to go from Vancouver to Newfoundland will see dozens of disctinct societies within Canada. People are people. Labels are divisive.

The design of the patch in and of itself, and the notion behind it, are not appalling until posted on a Habs jersey.

Not only do I not want to be reminded of the Nordiques on the Habs duds, I don't want any semblance of the Toronto Maple Leafs on there either.

At the Tourament Of Logo's site, the appearance of the prototype shoulder patch on the bleu blanc rouge was enough to illicit a Quebecois response in the comments, of how fitting it was to place the Fleur De Lys there, because the province was supposedly 80% pure laine.

The guy probably thinks Rocket Richard was a separatist!

My God! How did he ever allow an English nickname to get tagged to him?

As a Habs fan my entire lifetime, I've run into literally hundreds of people who have despised the team one way or another. I could always talk hockey with those who hated the team (read Leafs fans) out of jealousy for winning so damn much.
Then there are those who purely hate the team (read mostly Leafs fans) because of language and political issues. I can't get past that viewpoint to even continue a hockey chat with them.

Being fluently billingual, I also get to sample Habs fans who still hold onto the belief that team should be comprised of nothing but Quebec born and bred talent. They also rattle my crank to no end.

Inserting this logo onto the jersey would be ass kissing big time, to those narrowed factions. It conceptually cannot co-exist!

The Canadiens are a hockey team, pure and simple. It is made up of the best players it can aquire to try to win. It's biggest legends have happened to be french speaking through luck and consequence. We will always be proudest of them, but the sentiment should end right there.

They have won with both French and English players. Always did, always will. Their home may be the center of french speaking Canada, but there is little need to point it out.