Share All sharing options for: Kostitsyn Sits In Sin 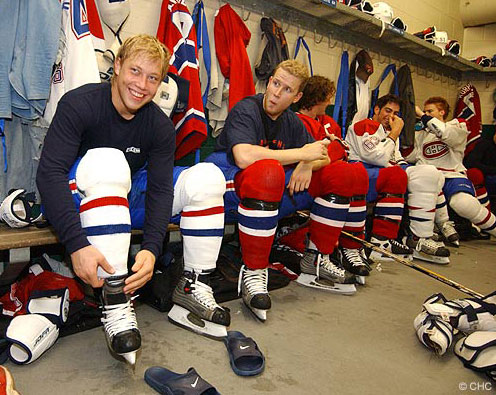 There will be no passengers allowed on the Canadiens train this season. Work hard and keep your seat. Failing to do so earns you a view from binocular row.

That seems to be the message, albeit a confusing one, being sent out to Andrei Kostitsyn and other Canadiens players by coach Guy Carbonneau thus far this season.

I will tiptoe delicately around the term "confusing", as certain messages sent by bench boss Carbonneau seem inexplicable at first glance depending on the player. Only in utopia are they all treated equally.

For one, sitting Kostitsyn for a pair of games most recently, is a bit of a puzzler for most. Sending hard working Steve Begin to a rafter seat was another move that raised eyebrows. The scenarios differ.

Not sitting Guillaume Latendresse, as a ghost of himself in early games, appeared like a kids gloves treatment one hand, and favoratism in another. He finally sat out one further along in his fluster. He seems to have hated the loneliness.

Other players who have sat out during the first eight games include Patrice Brisbois for one game, and Mikhail Grabovski for two, and Kyle Chipchura for three.

Garth Murray and Josh Gorges have conversely sat in, rather than sat out, replacing the undeserving of such in Begin and Brisebois.

Obviously, Carbonneau is enabling roster spot battling and inner competition at best, when he juggles the lineup card looking for the right mix versus the targeted evening's opponants. In his judgements, he has qualify who goes and who stays on a game by game basis based up effort, ability, and fit.

That's why coaches are paid the big bucks to have their hair go grey in light of an eventual firing!

In Carbonneau's case this season, his job is doubly difficult in that in certain cases an undeserving player has to bite the bullet. On a team carrying 23 contributors, logic is simply that 3 sitters per night will be grumbling long past the 8 floor elevator ride to the high seats. His job is made a lot easier when a player performs poorly. It is tougher when none do.

Still, the sin is failing to do one's required work.

Different players of different skill are demanded a different work focus - if that sorts it out any. 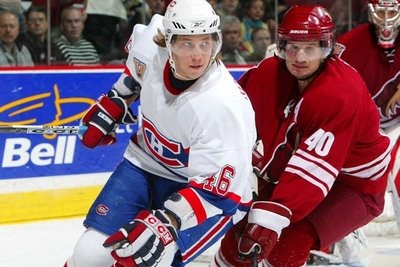 Where Kostitsyn has sinned, earning him passenger status, is in not applying in practice what the team has asked him to work on most, which is going hard to the net, and just as hard on the forecheck. Turning away from hits in his regard shows a squandering of focus. The press box seat is the coaches chosen manner of letting him know it.

The opinion has been voiced that Kostitsyn hasn't done all that badly to deserve his current fate. Trouble is, that's hardly the point. The Canadiens are trying to teach him that he is capable of a great deal more.

The Canadiens must be careful with Kostitsyn, a player with talent and skill to spare, who sometimes becomes misguided at times. They must bring him along by teaching him to earn his place without a free ride.

What makes the matter of Kostitsyn so delicate, is that he may be the most complete package of tools on the team. Assets such as shot, speed, vision, skill, passing and size all under one helmet are a rare breed, and an even bigger rarety on the Canadiens. The team cannot afford to have him develop only halfway and turning into a perenial third liner. They have slotted him in with Alex Kovalev and Tomas Plekanec in order to bloom his skill package.

It's also right about where he belongs. 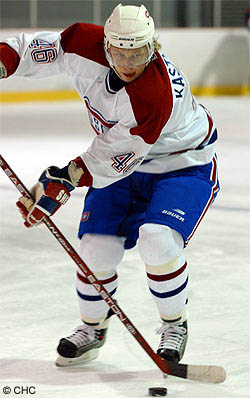 In teaching him that a night off on the ice is worth two in the stands, testifies to how serious the Canadiens are about doing this right. You can only drop a player from the second line to the third so many times before realizing that the hint isn't making a dent.

Some will make the point that the Habs are a better team with a forward like Kostitsyn in their lineup, half awake, than Mathieu Dandenault, used on the fourth line.

But, the argument only flies on paper!

What use is Kostitsyn on the fourth line, seeing maybe ten minutes of ice time per game?
Better to have a relentlessly dedicated hard worker such as Dandeneault plowing about, than tinker with an experiment in punishment for a player slow in getting the message.

Like I said, different whiplash strokes for different folks.

There are three stages in a prospect's development that apply to a player of Kostitsyn's breed. First, he accomplishes being a top line player in the AHL. Second, he shows an occasional dominance or consistency of effort to gain him a shot in the bigs. Third, he sustains that consistency by working hard at what needs to improved upon to remain in the NHL.

Kostitsyn is stuck on lesson three.

Another facet of importance in Kostitsyn's case, is that he has a jewel of a younger brother, Sergei, drafted much later, who is about to begin tearing it up in the AHL. Should the Habs allow the elder brother his deviances, what message does that send to the kid brother?

If I'm Guy Carbonneau, Andrei continues to have a slim margin for slipping. Another chance or two, and it's mirror time. Send him for some reflection duty in Hamilton.

Call up his younger, harder working brother. That'll get it accross!