Share All sharing options for: Canadiens Squeak Out OT Win 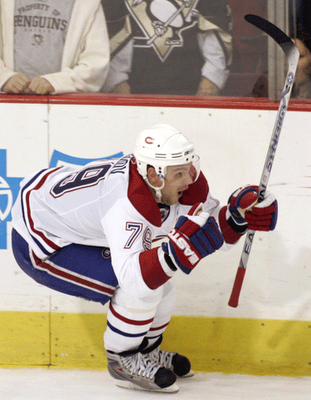 I've lots to say on Saturday's win over the flightless birds, without a cohesive thread of thought or storyline to follow. This game was very similar to Friday night's win over Carolina, so in the absence of having something new to say, I will just proceed in a Mike Boone style random notes manner.

And no, that's not a knock on Boone!

If you read yesterday's game rundown here, on the Canadiens need to learn how to deal with leads early in games, you can guess that I would simply apply and reiterate many of the same points for the Penguins game.

Against Pittsburgh, the Canadiens fresh off a 3 zip lead, attempted to put the shutdown mode into practice starting in the third period, once the score was 3-2 - twenty minutes too late! Applying a defensive blanket and dumping the puck at the right time with a one goal lead was a tenuous proposition, but the Habs executed it well, holding the Penguins to only three shots through the first 16 minutes of the third period.

It looked as if the Canadiens had learned something from the night before, albeit a period too late, and it was unfortunate that a pair of dumb penalties corroded a fine third period focus. I choose the word "dumb" over "indisciplined" because of the nature of the penalties. A too many men on the ice call should require referees to count to three before an arm is raised and the whistle's blown, especially when the errant players aren't involved in the thick of the play. Dumb also perfectly describes a slashing call when the stick of a player in possession of the puck, or about to receive a pass, is slashed.

Is it just me or do the Canadiens / Penguins games lack a little spark without Maxim Lapierre. This game was without it's usual Ruutuu, Roberts, Armstrong, or Orpik incidents as well. The Kovalev shoving of an off balance Malkin didn't deserve the ruckus it created. Unfortunately, it changed the tempo of the game for Montreal. Never kick a sleeping dog. 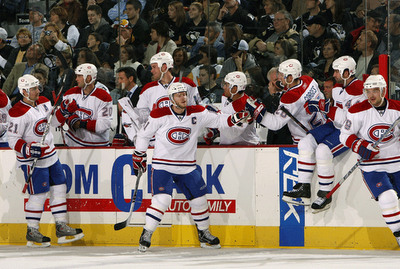 Nothing to do with this game, but few things anger me as much as that shooting the puck over the glass, delay of game call. Calling the penalty is what delays the game most. Penalize the faulting team by disallowing a line change on the ensuing faceoff, as they do with icing. Misjudging the height of the glass should not be confused with a foul.

On brighter notes, has anyone noticed the Canadiens are undefeated since the Habs Fans Summit last Saturday? Were all of us that much of a good luck charm or did leaving behind my Rocket 500 sign at the Bell stir up old friendly ghosts?

Carey Price was phenominal in the shootout, stopping three of eight shots. He played his position so well, making himself big and square enough that five shooters shot wide. The shooters he offered little room to were no slouches - Crosby, Malkin, Staal, Sykora.

Who would have though the Canadiens would end up in a shootout eigth rounds deep with Andrei Markov netting the winner?

Next time the Habs play, watch this! Michael Ryder 's calling card is his sniper - like wristers, and I noticed something about his mobility the last few games. Have you ever noticed Ryder is a triffle stiff in stickhandling or checking opponants going by him? For three games now, since Monday's tilt with the Bruins, I have been watching and waiting for Ryder to remove one hand from his stick, with or without the puck, and try a move unfamiliar to opponants. Ryder always has two hands on his stick, and it limits his effectiveness. That would explain why he appears so stiff out there. He reminds me of players on my daughter's team, who have yet to learn how to widen themselves defensively by using an open stick stance to appear larger and block passing lanes. Even when he switches to the backhand, in shooting or in defying a defender, the hands don't move off the shaft.

I notice that very few people still question the reasons behind singing Tom Kostopoulos and moving Mathieu Dandeneault up to wing. I gather that speaks for their work ethic and results.

Andrei Kostitsyn played a solid, if unspectacular, game against the Pens. He seemed a little more willing to pay to the price in the thick of traffic, and I liked that he tussled some with Crosby when he went after Kovalev.

Speaking of Kovy, he had a brutal second period playing like a player whose contract has bonus clauses for points. Of course, that's not the case, and he smartened up in the third, unloading the puck down ice instead of craddling it when confronted. 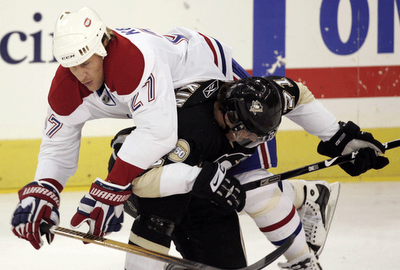 What would the San Jose Sharks give the Habs for returning Josh Gorges to them? Throw in Halak and give us back Rivet?

I am surprised by Kyle Chipchura, good as I heard he was, I was never expecting to find him so mature so soon.

The Penguins Dan Sabourin impresses me more than Fleury ever did.

I've never been a big fan of games on back to back nights, and there is an inherant unfairness in how they are scheduled. The league's board of governers should rule that every team partake in the same number of back to back contests. Teams should only play their second games against teams in the same situation. No team should have to play two consecutive nights on the road.

The NHL would like you to believe that all things fair out in the end. They would also like to sell you those flimsey Reebok jerseys at double the price and half the quality of the better looking ones we've all come to know and love.

That's all for now - back to work on goalie posts!