Share All sharing options for: Habs Flipped By Birds 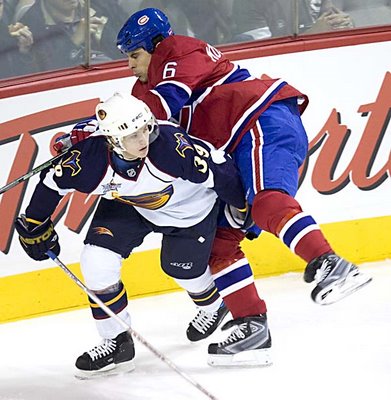 It had to happen sooner or later!

The dismal showing by the Canadiens against the cellar dwelling Thrashers had all the plots makings of them falling into a predestined trap.

This year's Habs have so far shown a tendency of being able to conquer the more solid teams while punching cruise control against the perceived weaker ones - which leads to trouble. Lately the team has developed a habit of storming out of the gate and burrying teams early, and this would have been the recipe for success against Atlanta.

The one point earned in the third period's eighteenth minute was a just return for a partial effort.

The work ethic did not show up soon enough in this one, and that is puzzling.

You can tell when a team is on cruise control when the visiting opposition steps up and implements its own system of play, from the get go, in the home team's building - outshooting them by a wide margin in the opening period.

Coming off a four game win streak, the Canadiens might have seemed a touch overconfident that everything would place itself neatly, but things do not work that way.

As much as hockey is a game of effort and instinct, there is a certain amount of preparation that must go on between the ears in situation's like these. It is about lessons and experience.

This one point lost is similar to those dropped last season when it would have been needed after the 82nd game.

The Habs ought to know better. Much better. 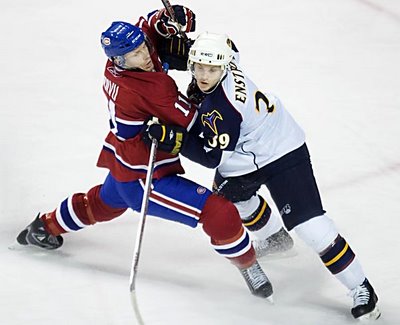 I render a lesson such as this as part of the growing pains in the Habs evolution from a middle pack team with potential into an elite and confident team that is able to foresee what challenges lie around the corner.

That they might have seen this coming says little. Once the Habs are able to act upon seeing their sleep mode arrive and do something about it, then they will have climbed another rung up the ladder.

Coaches can prepare teams with the most precise of game plans, but when no one shows up to practice what's preached, he is left befuddled.

Carbonneau's alarm clocks did little to awaken a team sleepwalking through their slumber. The guiltiest pre-Halloween ghosts in red, white, and blue, had names like Ryder, Gorges, Markov, and Plekanec, among others.

In fact, only Alex Kovalev stood out, which is saying something.

Listing all those leaving their spirits behind and showing up in body only undoes the team concept. This loss was a team effort. In Carbonneau's mind, he must be concerned about certain players, and it would be surprising to see some less than subtle messages being sent, starting with Thursday's tilt against the Flyers.