An Inspiring Start On The Road

Share All sharing options for: An Inspiring Start On The Road 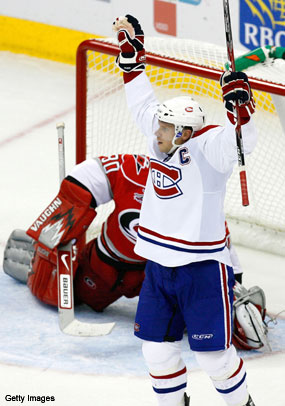 The first game is in the books, and "freak me out", my prediction in the previous posts comments that the Habs would win 3-2 was dead on!

This was an exciting game from start to finish, and these boys sure didn't look like a 13th place finisher tonight. Getting 40 shots on net, in a road game, qualifies as a solid start. There were some rusty moments and crossed wires, but overall I think everyone is pleased the Canadiens put in a close to 60 minute effort.

How about the PP? 3 goals, who'd have thunk it?

I'm not a big fan of doing game recaps from the drop of the puck to the final whistle. Telling you about what you already know about what you've just witnessed is mildly redundant and would wear thin in a hurry as a formula.

After the contest was over, I was pondering just what type of post game format I could use at the site that would have a more unique feel to it. I decided that I would run down the lineup and grade the Habs performances in the scheme of the game - something I would do in numerical jersey number order from best to worst in each rank.

Rather than go the usual A, B, C, or scale on 10 route, I was inspired by my crappy satellite reception to start the contest, for how I will proceed in grading the players each game. I imagine there's no need to explain each category. 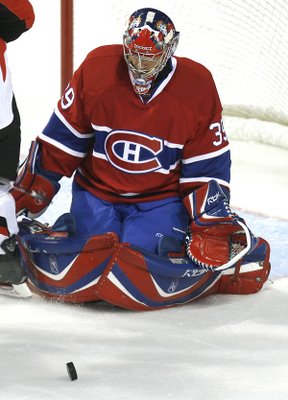 11 - Saku Koivu: Can't ask for much more from your captain. A pair of goals, including the game winner in overtime is equal to his importance within the team. Top marks for a very inspired preformance. Does anyone pronounce better joy in a goal scoring celebration? Always heart warming to see him so happy.

32 - Mark Streit: Impresses me more every time I watch him play. He's become a very self assured member of the team. No way is he merely a 5th defenseman. His passing was pinpoint tonight and that booming blast of a first goal was so reminiscent of Souray it made me laugh with joy. Made a great play coming back to cut off a 2 on 1.

39 - Cristobal Huet: How about the save of the year - in the first game! Huet was lucky while enduring a few shaky moments before setling down and being his rock solid self. His steadiness allowed the boys to freewheel some and he showed why he is still one of the better tenders in the league. 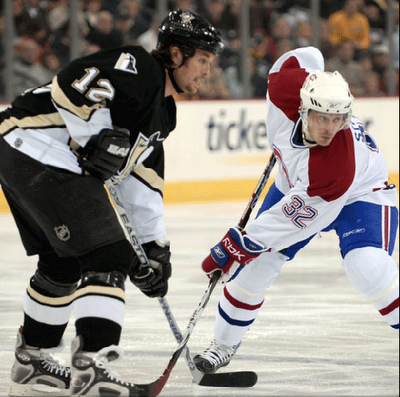 21 - Chris Higgins: Took some time to get his quickness going tonight and missed on some great chances he'd worked hard to create. His second effort was there all night, nowhere better exemplified than on the diving puck slash pass to Koivu on the game winner. Not bad at all for only his fourth game of the year.

22 - Steve Begin: Was his thorny rambunctious self and was key in this victory by enabling the Habs to have a strong fourth line on the road. This is exactly what Begin brings to the team - blood, guts, and little glory. As I always said about him - a captain without a letter!

27 - Alex Kovalev: Worked hard. Created chances. Made a few obvious boobs. In other words, his usual game. Earning his the Living Colour nod was that he did everything with passion tonight. He was one of the better Habs along the boards and when he's so he backs up insecure defenses like he did so well tonight. If this is the new and improved Kovy he'll create lots of smiles over the winter. Let us now pray for continuity in his regard.

44 - Roman Hamrlik: One word - solid. I get the gist of what he brings a little clearer now. He'll never be spectacular, but he also doesn't commit too many errors. He is in fact the ideal partner for Brisebois and he can play in every facet of the game. Watch for him to be on ice alot, in the game's dying moments helping preserve one goal leads. The question is - is he worth the big bucks? Only in a team concept. I haven't seen him in an individual light yet.

46 - Andrei Kostitsyn: Man does this guy just ooze potential! He might just have the best game vision on the team and it is going to be a treat watching him blossom over the next few years. The tme will come where he dazzles with Kovalev. Made some beauty moves and passes tonight and brings some unpredicatability to his play choices. I never know what he'll do next. His defense needs tuning and he's got to learn to keep his head up.

71 - Patrice Brisebois: I can't believe I am about to say this, but Breezer made me eat some words tonight. Well maybe just the beginning of an incomplete sentence. Was surprisingly calm in heat of PK duty tonight and was key to killing off a pair of 5 on 3 situations. Both Gainey and Carbonneau breathed a great big sigh of relief. Looks a bit more promising than we assumed.

79 - Andrei Markov: Equal to himself by never getting caught off guard. Made some dandy passes and ended the night with a pair of helpers. Earned his salary playing his allotted time. Likely docked a notch in regard to a jittery partner tonight. 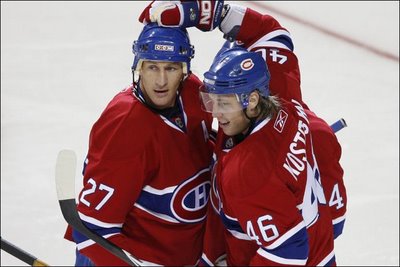 6 - Tom Kostopoulos: Showed why he was signed. Played a gritty game in nullifying the Canes forwards. He's dedicated, but he doesn't create a thing offensively.

8 - Mike Komisarek: Not great tonight, missing some opportune times to lay out a Hurricane player or two. He improved as the game progressed but his edge took longer to come around. No worries here. Was playing as if he didn't want to end up in the box while the penalty parade was going on.

14 - Tomas Plekanec: Possibly because of the many penalties earlier on, he didn't get rolling with the lines too smoothly. Perhaps he spent the game covering the ass of a winger out to lunch. Did dutiful work on the PK as can be expected. Likely needs more fleet of foot linemates to find his full game. Spent an awful lot of time being invisible tonight.

20 - Bryan Smolinski: Quite tempted to place him in a higher category tonight simply for the way he brought intensity in game's later moments along with Begin. Spent half the game concentrating on being positional it seems and I think he's more valuable the longer he keeps moving. His integration into the team will be ongoing. A hefty presence along the boards for a good and promising Habs debut.

25 - Mathieu Dandenault: Didn't blow me away but you must admit he played his role quite well. The fourth line was inspired along the boards and they affected the game's flow positively. I kept expecting a glaring mistake from him that never came. Like Smolinski, he had moments of being invisible in a good way tonight.

51 - Francis Bouillon: Cube was solid, but he was an adventure a few times clearing the puck when pressured. I was so hoping he'd drop 'em with Scott Walker early on, but he was smart not to considering the scoreboard. Gorges might have done better transitionally so Bouillon is on the bubble. He did just enough to dress for the next game - nothing more.

54 - Mikhail Grabovski: The little fleeflicker did his job without much result. He's going to have many games like this I'm afraid. He takes chances that will see him burned sometimes. Tonight he was very effective in finding Kovalev and Kostitsyn. Like any player that creates sparks, he has to watch out for gas leaks.

73 - Michael Ryder: Mr Arbitration was very well covered by the Canes tonight which might have accounted for his center slipping free for a couple of goals. Did better with puck possesion and passing this evening. Hope the trend keeps up. Still has that stubborn habit of thinking he can beat opponants one on one. He should choose his moments better.

84 - Guillaume Latendresse: Played with absolutely no assurance tonight. Threw a couple of decent hits in an overall nervous game. He kept missing passes and getting the puck caught in his skates. Looked oddly distracted and out of place playing with Plekanec and Kostopoulos. A canadidate for a press box seat at the ACC on Saturday. He'd better not string too many performances of the like together - players in Hamilton are kiling themselves to slide into his role.

Guillaume was close, but nobody was unworthy enough for due mention here tonight.