Share All sharing options for: Higgins Bringing The Required Hunger 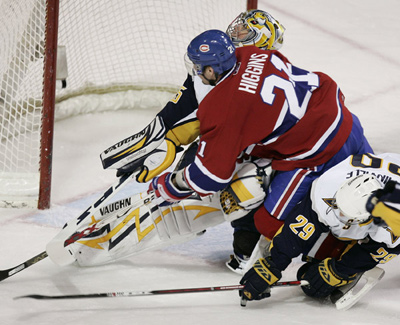 With quotes from the Globe and Mail's Tim Wharnsby and the Canadian Press coverage of the Montreal Canadiens training camp. Photos from Habs Inside Out.

Two games into the 2007-08 season, one thing is apparent - Chris Higgins has come to play!

In both Wednesday's win over Carolina and Saturday's over loss to Toronto, Higgins has been his sprinting, crashing, and offensively creative self. His intensity cannot be questioned and key plays in both games have showed why he has a newly sown "A" on his jersey.

Higgins endured both a prosperous and a setback filled 2006-07 season. After notching 23 goals, many in the latter season stages of 2005-06, he caught fire in the early stages last year, banging in 8 goals in his first 13 games. Many were predicting a break out 35 goal season and an All Star game appearance for Higgins when destiny reared it's ugly side in the form of injuries, first to an ankle and then to a collar bone. The injury was described by Graham Rynbend, the Canadiens head athletic therapist, as " a multi-dimensional bruising, irritated tendons and an irritated ligament - a strain, sprain and a bruise all together."

Higgins, through it all still managed 22 goals, one less than his rookie season total. Leadership, perseverance and dedication, no doubt, are part and package of Higgin's mental makeup.

The Canadiens forward had a late start to this season's training camp, as team doctors were cautious to clear the shoulder injury. Sitting out the first of four exhibition games, some felt it might take Higgins some time to adjust, focus and get back on track. Those fears were greatly erased by his performances so far. 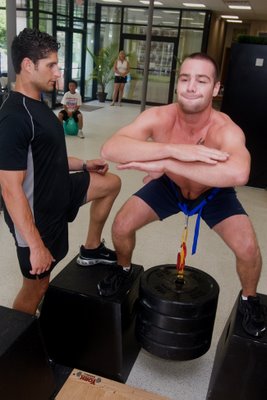 On Saturday, the Canadiens departed the Air Canada Centre without a victory. Such is never a welcome state of affairs. The Habs did see many encouraging signs from the 4-3 overtime loss, and one surely must be the continued strong play of Higgins. A factor in every shift against the Leafs, Higgins performed some short-handed magic in the second period when he set up a short handed goal by defenceman Andrei Markov to give the Habs a 2-1 lead.

When Leafs defenceman Bryan McCabe fell down at the Montreal blueline, Higgins sped by pouncing on the loose puck, then dipsy doodling around Tomas Kaberle in the corner. He made a laser pass onto the stick of Andrei Markov in the slot for the shothanded goal. 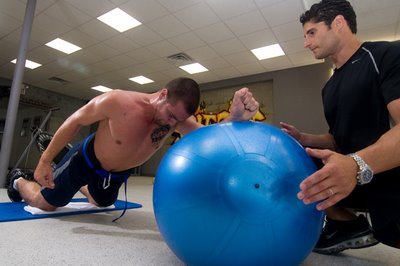 "He's come back strong," Canadiens captain Saku Koivu said, referring to the injuries. "The potential is definitely there, give him some time and people will be talking about him for a long time to come."

Wednesday night, Higgins also set up Koivu's overtime winner in the Habs 3-2 season opening victory against the Hurricanes. It appeared that his hard work on the Markov goal might lead to a second successive game winning assist before Montreal blew it's second period lead.

It was an outing reminiscent of the last visit by the Canadiens to Toronto last season when the Habs let another 2 goal lead turn into a 6-5 loss, knocking Montreal from the playoffs.

Not long after that loss, Higgins questioned the chemistry on a team that had been wedged apart by Sergei Samsonov's trade requests, Alex Kovalev's criticism of coach Guy Carbonneau, and the benching and ensuing trade of the popular Craig Rivet.

"I thought we had a good team and that if we made it to the playoffs, we could do some damage, especially against Buffalo," said Higgins. "They were the one team I was looking forward to playing, but it didn't work out.

"We had a weird last game against Toronto. It drove home why we didn't make the playoffs and how we lost that last game. We were up 5-3 and it went pretty sour, pretty quickly after that."

Higgins hails from Long Island, N.Y. He was born three weeks after the New York Islanders won their fourth consecutive Stanley Cup, but he grew up with Eric Nystrom, the son of former Islanders forward Bob Nystrom.

The younger Nystrom is now a Calgary Flames prospect, and he and Higgins, along with Canadiens teammate Mike Komisarek and current Islanders goaltender Rick DiPietro, assemble in the summer on Long Island and participate in a unique approach to off-season conditioning. 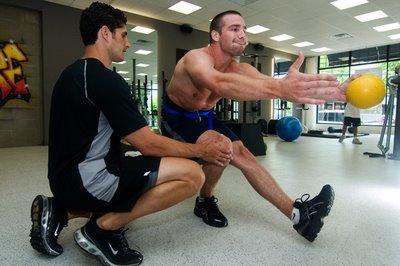 A couple of days a week of yoga supplements power lifting, explosive sprint drills and plyometrics. Nystrom was the one who enticed his friend Higgins to give it a try three summers ago.

Higgins and Komisarek were introduced to yoga by trainer John DeFlorio, the head of Institute 3E. The 3E's stands for exercise, education and empowerment.

"It's definitely interesting to see a room full of big hockey players trying to do yoga," said Higgins, who, despite his injury last season, matched his career best total of 38 points. "We're not the most flexible group of athletes. But it's become an important part of our workouts." 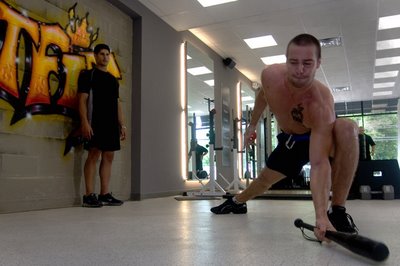 Most pundits were predicting a long, sad season for the Montreal Canadiens, but Higgins is out to prove them all wrong.

"I know a lot of people have us down and out and not making the playoffs, but it comes from within, from chemistry, and hopefully the young guys will find that early and ride it the rest of the year. Youthful energy is going to be a big part of the team."

Higgins sees the theme for the Canadiens season when saying "the main word for this year is hunger. Guys have to want it. And if you play hungry, more often than not you're going to win games. That's the sentiment we have to have in the locker room every night."