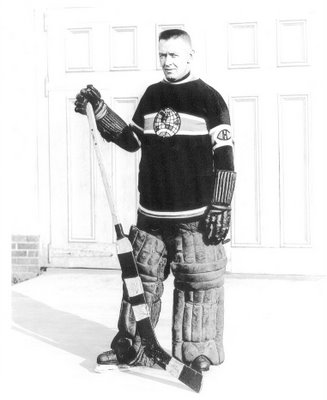 One of the elite goaltenders in the annals of NHL history, Georges Vezina was a key figure in the early history of the Montreal Canadiens franchise. His outstanding play served as a model for stand-up goalies in the future. Long after he retired, fans were introduced to his name and his contributions whenever the Vezina Trophy was awarded at the end of each NHL season to the best goalkeeper in the league.

Vezina stood out in the Canadiens' net even though he played in a league that was very offensive-minded and on a team that initially struggled. In addition, goalies were forbidden to fall to the ice to make a save. So, Vezina managed to perfect an early version of the stand-up style of goaltending. A quiet, clean-living man who operated a tannery business in his home town during the off-season, his calm and cool demeanor resulted in his being labeled the "Chicoutimi Cucumber." 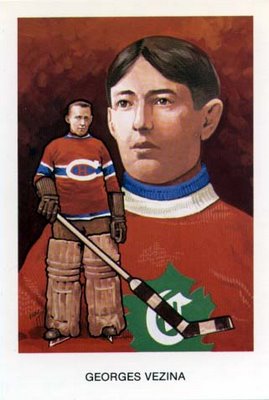 Vezina was born on January 21, 1887 in Chicoutimi, Quebec, Canada, a small town located on the Saguenay River. He was the son of Jacques Vezina and his wife, who were both employed as bakers. Vezina played hockey from his youth when the game was still in its infancy. He might have played on his town's first hockey team ever. The game probably had been brought to Chicoutimi by some employees of Price Bros. who had attended McGill University in Montreal. Price Bros. was a local company who built a rink in town, which Vezina's father later bought. 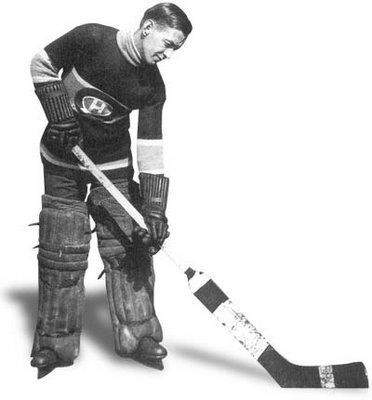 Vézina studied at the Petit Séminaire de Chicoutimi from 1898 to 1902, leaving after the second year of the commercial course to help his father in his bakery. At the age of 16 he was taken on as goaltender by the Club de Hockey de Chicoutimi. He was familiar with the game, having played street hockey with his friends, but he had never worn skates. Vézina learned quickly.

While playing the goalie position for amateur teams in his youth, Vezina wore boots instead of skates, a common practice of goalies in this time period. When Vezina was 18 years old, he learned to skate and wore skates while playing after that. By 1909, he was the goalie for the Chicoutimi Sagueneens, an amateur team that played in the Montreal Senior League. Vezina was only 5'6" and weighed, at most, 185 lbs., and was described as thin and frail looking for much of his career, but his focused demeanor in goal was about to take him to professional ranks.

During the 1904-05 season, at an exhibition game between the Montreal Nationals of the Canadian Amateur Hockey League and the Chicoutimi club - a game Vézina’s team won - the Nationals’ goaltender, Joseph Cattarinich, was impressed by the 18 year old in the opposing goal.

At the end of the 1909-10 season, since he was giving up his position as goaltender for the Canadiens (a club formed in December 1909) to take on other duties with the team, Cattarinich suggested that Vézina be contacted.

Vezina agreed to play for the Canadiens beginning in the 1910-11 season for $800. He actually never signed a contract, but had a handshake agreement with the Canadiens manager. Vezina was known for such indiscriminate ways involving his money. He often loaned money to friends, which was never repaid. After agreeing to play with the Canadiens, he maintained a tannery business in his hometown. Vezina was also married in this time period.

In 1910, Vezina played in two exhibition games in Chicoutimi which would lead to his professional career. In preparation for upcoming Allan Cup play, the Sagueneens played against a touring Grand'Mère Senior club early in the year. Vezina garnered recognition because he got a shutout. He had the same result a short time later when he and the Chicoutimi team played against the newly formed Montreal Canadiens, a professional team of the first year National Hockey Association, in a barnstorming game in February 1910. Vezina backstopped his team to a 2-0 win. At this time, shutouts were very uncommon in part because goalies were forced to stand in goal for the whole game and were not allowed to drop to their knees to block shots. Vezina's stick handling skills were already in evidence and his play impressed the opposition.

To ensure that he would agree to come to Montreal, Pierre, one of his brothers, who played forward, was also asked to come and practise with the Canadiens for the 1910-11 season. Georges stayed on; his brother went back to Chicoutimi. Hired in December 1910, at a salary of $800 per season (not an unusual figure, since most payers received $1,000 or less in those years), he began a brilliant career with the Montreal Canadiens, in both the National Hockey Association of Canada (1911-17) and the National Hockey League (1918-25).

The Canadiens, who were known as the Club Athlétique Canadien from November 1910 to the end of the 1915-16 season, were not immediately successful but they continued to make progress, with Vézina invariably in the net. During his rookie year, 1910-11, Vezina led the NHA in his goals against average, a feat he duplicated in his sophomore campaign. In 1914 he led the Canadiens to a first-place finish in the NHA standings, though they lost the league championship series that year to the Stanley Cup winning Toronto Blueshirts. 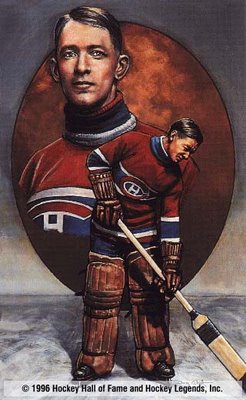 At the end of that season they were NHA champions, and they had to face the Portland Rosebuds of the Pacific Coast Hockey Association in the Stanley Cup playoffs. The Canadiens emerged victorious from a memorable five-game set against the PCHA champion Portland Rosebuds in a series that represented the first of many appearances in the Stanley Cup finals for the Canadiens and the inaugural one by an American team.

One of Vézina’s sons was born during the playoffs and he was named Marcel-Stanley in honour of the victory. In the 1916-17 season, the Canadiens again won the NHA championship, but lost in the Stanley Cup playoffs to the Seattle Metropolitans in four games. 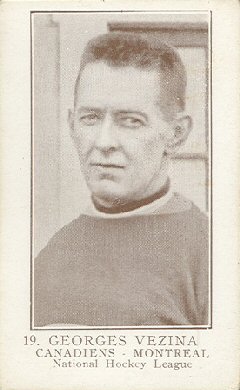 Despite Vezina's heroics, Montreal lost the sacred silverware to the powerful Seattle Metropolitans the following year and the Washington State team became the first Stanley Cup winner from south of the border. Two years later, in the fateful rematch that was eventually canceled by the influenza epidemic, the normally quiescent Vezina was described as being high-strung. It was a portent of the goaltending showdown that was about to take place between the Habs star and the legendary Harry "Hap" Holmes of Seattle. The Canadiens entered the inaugural NHL schedule in 1917-18 with Vezina as one of their pillars. He topped all NHL goalkeepers in his goals-against average that year and again in 1924 and 1925.

Vezina's heroics were a vital component of the Canadiens second Stanley Cup championship in 1924. He stymied the Ottawa Senators in the NHL playoffs before helping Montreal overcome the challenges of Vancouver and Calgary of the PCHA and the Western Canada Hockey League respectively. In the regular season, he led all NHL netminders in his goals against average, ending a five-year dominance by the great Clint Benedict.

While sweating through training camp workouts prior to the 1925-26 season, Vezina was obviously not in good health. Despite a high fever, he was performing admirably in the Canadiens' season opener versus the Pittsburgh Pirates, but when he was forced to retire from the game, Vezina was diagnosed with advanced tuberculosis. Sadly, his condition only worsened until he passed away on March 26, 1926 but his family history was also full of tragedy, as only two of his 24 children lived to adulthood.

Even those in his own household did not know he was fighting for his life when he played his last game on November 28, 1925. The Canadien's' opponent in the old Mt. Royal Arena in Montreal that night was the Pittsburgh Pirates. After a scoreless first period, Vezina left the ice bleeding from the mouth. He collapsed in the dressing room, returned for the start of the second period, then collapsed again and had to leave the game. Only then did his family and friends learn that he had tuberculosis. Four months later, at the age of 39, he passed away.

Frank Boucher, a player from Vezina's era thought highly of the Montreal goalkeeper.
"The first thing that pops into my mind is that Vezina always wore a toque, a small, knitted hat with no brim in Montreal colours - bleu, blanc et rouge. I also remember him as the coolest man I ever saw, absolutely imperturbable. He stood upright in the net and scarcely ever left his feet; he simply played all his shots in a standing position. Vezina was a pale, narrow-featured fellow, almost frail-looking, yet remarkably good with his stick. He'd pick off more shots with it than he did with his glove."

Fittingly, the first recipient of the trophy was George Hainsworth, the brilliant young goalie who was presented with the task of replacing the legendary Vezina in Montreal. Another trophy was created in Vezina's name as a means of acknowledging the top goalkeeper in the Quebec senior league.

Vezina was among the first 12 individuals elected to the Hockey Hall of Fame when it was founded in 1945.