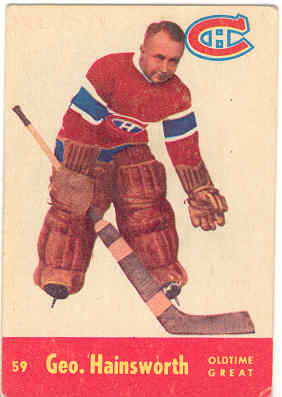 Hainsworth signed with the Montreal Canadiens on August 23, 1926, after Newsy Lalonde recommended him to owner Leo Dandurand. This proved to be an accurate appraisal and the newcomer became an instant hit.

Hainsworth was one of hockey's dominant goaltenders of the 1920s and 1930s and his netminding heroics became a legacy that lasted many years after he retired. He appeared relaxed while performing between the pipes, as though giving a minimum of effort. His laid back approach and exceptional puck stopping ability continually frustrated opposing players.

The Toronto native enjoyed a strong amateur career in Berlin (later Kitchener), Ontario. It began with a solid season with the Berlin Union Jacks junior outfit in 1911-12, leading the league in victories. This was followed by four years with the city's senior club. In the second year he backstopped the team to the OHA championship. 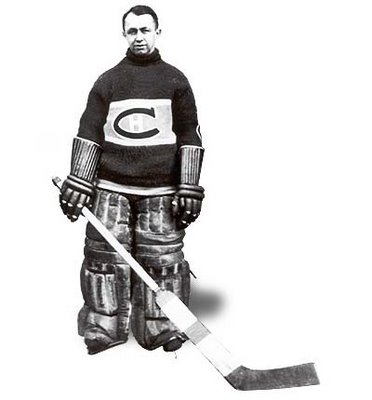 In all four seasons, Hainsworth led the OHA in wins while developing a reputation as one of the top amateur goaltending prospects in Canada. The emerging star spent the 1916-17 season with the Kew Beach team, based in the east end of Toronto. Hainsworth next moved on to play six seasons with the Kitchener Greenshirts senior OHA team and he added another honour to his portfolio with an Allan Cup triumph in 1918. 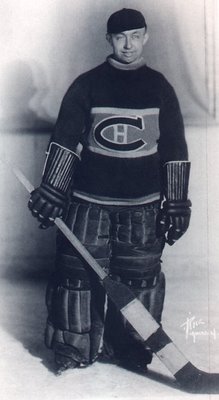 Western Canada benefited from Hainsworth's professional debut. He spent three years with the Saskatoon Crescents of the WCHL/WHL before becoming a legend in the NHL. In 1924-25, he led the club to a second-place finish in the regular season standings. This strong team also featured the likes of Corb Denneny as well as Bill and Bun Cook. Hainsworth's goals against mark of 2.70 was bettered only by Harry "Hap" Holmes of the Victoria Cougars. The Crescents met the favored Cougars in the playoffs. Hainsworth was strong but the Saskatoon club lost a tough series by a 6-4 aggregate score. In each of the three years he spent out west, he led the league in games played.

Upon joining the Canadiens, Hainsworth was an immediate hit winning the newly created Vezina Trophy each of the first three years it was presented, from 1927 to 1929. In 1928-29, he enjoyed his greatest season by allowing only 43 goals in 44 games and registering an incredible 22 shutouts - to this day an NHL record that will remain untouched. A veritable workhorse, Hainsworth led all NHL goalkeepers in games played for nine years out of 10 from 1926 to 1936. He hit double figures in shutouts in his first three years in the league while posting a goals-against mark of less than 1.50. 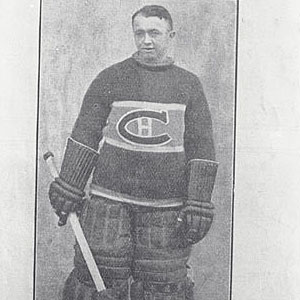 Following his record-breaking season, the NHL's forward passing rules were modernized, making it virtually impossible for Hainsworth to post such remarkable numbers again. Still, he backstopped the Habs to the Stanley Cup in 1930 and 1931. 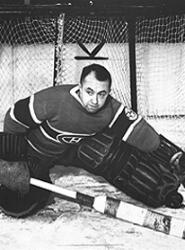 In 1929-30, Hainsworth helped the Canadiens win their third Stanley Cup, defeating the Boston Bruins in a two game series. The following year, in an expanded playoff format, Hainsworth was heroic once more as the Canadiens held on to their title after falling behind 2-1 in games against the Chicago Blackhawks. The Habs took the five game series 3-2, and Hainsworth allowed only 8 goals in the series.

In 1933 he was traded to the Toronto Maple Leafs for Lorne Chabot. This transaction made the two netminders the first goalies to play for both storied franchises. Hainsworth helped Toronto win two Canadian Division titles and make appearances in the Stanley Cup finals. On February 14, 1934, he was the Toronto goaltender in the historic Ace Bailey Benefit Game. 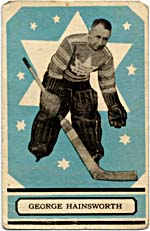 As a member of the Maple Leafs, Hainsworth twice led the NHL in wins, but in 1936-37, the club decided to go with young star Turk Broda on a full-time basis. Consequently Hainsworth was allowed to sign as a free agent with the Canadiens, where he played his last four big-league games.

"Little George" retired in 1937 with a 1.91 career goals-against mark, the lowest in NHL history along with Alex Connell. His 94 career shutouts were an NHL record until Terry Sawchuk surpassed him in 1963-64. His professional total would include 10 shutouts in the WHL, giving him 104 - one more than the NHL's all-time leader. His miniscule 1.91 goals-against mark reflected the low scoring climate that existed during all but two of his seasons. Although the rule changes saw his average climb only late in his career, Hainsworth was one of the top backstoppers of his time.

George Hainsworth died from injuries ( several broken ribs had punctured his heart ) suffered in a car accident on October 9, 1950.

Hainsworth was elected to the Hockey Hall of Fame in 1961, the first year at its year-round location on the grounds of the Canadian National Exhibition in Toronto.