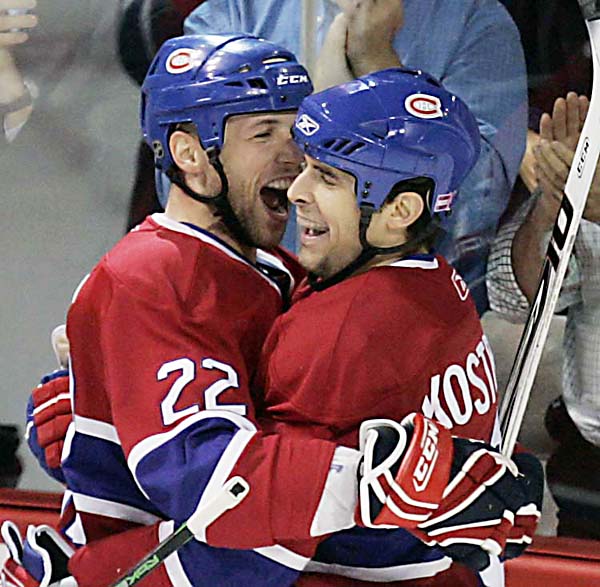 They got ahead, they stayed ahead, and they rarely looked back.

Don't we wish the Habs could win them all this handily.Through the first seven games of the season, the Canadiens have gotten their fans used to an assortment of nailbitters, in the form of one goal games.

There's been one goal losses, one goal wins in regulation, overtime wins and shootout wins. Everything down to the wire.

I can get used to games like these in a hurry, though there won't be many.

While sweaty palms in the third period make for better drama, this is the remedy when there is no more nail left to bite.

The Bruins didn't look like such easy prey strolling into town riding one of their best October's in recent years, but the Habs still managed to freightrain them solidly.

Through eight games, the Canadiens are beginning to come into form and develop an identity of sorts. For one thing, they've shown themselves to be a whole lot stingier on defense, having cut down on the oppositions quality chances, and hence the reduced goals against. Another plus has been the contribution of four lines to the scoresheet, along with regular bonus goals from the blueline boys. 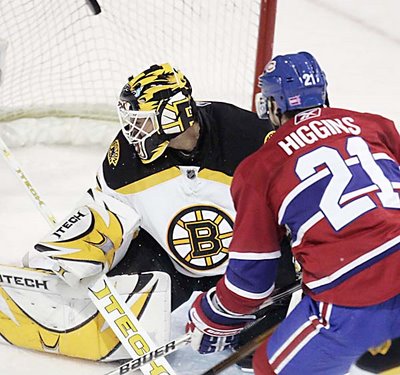 All taken together, we are witnessing the coming together of a confident team.

Take that and swallow it, those of you who didn't exactly see the additions of Roman Hamrlik, Bryan Smolinski, and Tom Kostopoulos as smart moves. The steady vets seem to be enabling the rookie and sophomore nervousness to remain low. Not that it was Gainey's prime off season plan, but what he has put together has worked well so far, and the wheels are just getting greased.

This is a calmer and more assured assembly of players this season, and well, it should be.

Has anyone taken note that the Habs have beaten the perceived better teams (Carolina, Pittsburgh, Buffalo and the hot Bruins) while losing to supposed weaker ones, namely the Panthers and Leafs. In Ottawa, the clung to the league's best team for 54 minutes and could have upset the Senators with a little more luck.

There is no inferiority complex on this squad. 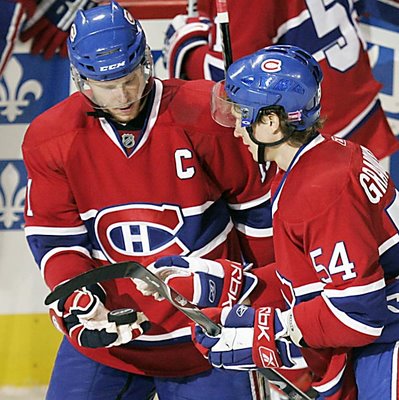 After gaining points in six of eight contests, the Habs are now slightly ahead of the middle pack teams. And yes, it is early, but this team works hard on getting better, and soon what were losses to Florida and Toronto will become wins down the stretch.

I see efforts being made in several areas that are helping build a better sixty minute focus. It's little things like winning more key faceoffs and slow, but coming, sense of heighened discipline. The defenseman are more composed, and they are being given better help by forwards returning to the zone with a lot more zip.

Tonight, I started to notice how I'm enjoying a player such as Kostopoulos and what he brings. We are all getting accustomed to Hamrlik's steady influence and smart play choices. Alex Kovalev is playing like he has a thing or two to prove and Chris Higgins is starting to get his quickness and timing back.

Guillaume Latendresse played his best game tonight, finally looking as though he belonged.

And what can you say about the play of Cristobal Huet? It is as if the goaltender plays each game with the intent of making a statement, and the statement could very well read "I have seen the future of Montreal Canadiens goaltending, and it's me - right now!" 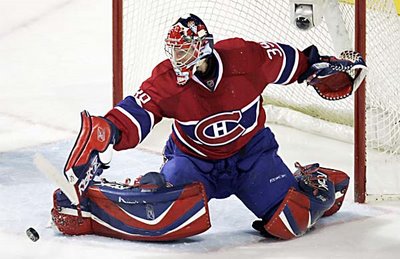 Those quick to suggest our number one goalie, whose contract runs out at year's end, would make for wonderful trade bait, are possibly having second thoughts.

Other players are rounding into form quite nicely as well. Kyle Chipchura oozes potential as a shut down player. What poise for a 21 year old? Tomas Plekanec is just getting going again and is showing that he is able to adapt to different roles on the team. Mike Komisarek had his best game so far and is learning to choose his options more wisely in terms of offensive push and defensive crash. Smolinski plays well wherever he is slotted in the lineup.

It's leaders - Saku Koivu, Andrei Markov, Kovalev, have brought steadiness in each contest and have prevented any sense of panic when they team cruises through the games rougher spots.

Wins like this one over the Bruins tend to trigger the highest of hopes. It is not from such "feel - good" results that a proper evalution can be made of where the team stands. What can be ascertained at present is that these Habs look like they can measure up against all opponants and have a decent shot of winning every game.

I'm surprised myself, to come to such a conclusion a brisk eight games into the season.