Canadiens Goalies of the 1930s

Share All sharing options for: Canadiens Goalies of the 1930s 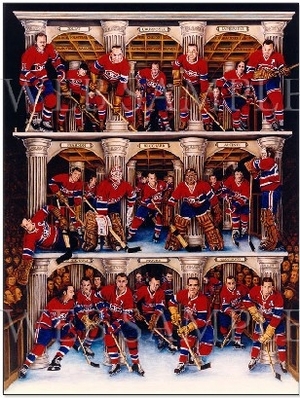 After the back to back Stanley Cup wins in 1930 and 1931, the Canadiens were soon to embark on the darkest period of their history. The times would see the franchise thread onto the brink of extinction in the late 1930's. Gone were stars such as Newsy Lalonde and Georges Vezina, and players such as Aurele Joliat and George Hainsworth were leaving their prime years behind. The untimely death of Howie Morenz cast a great shadown of doubt over the future of the franchise, as the team battled it out with the Montreal Maroons for the affections of Montrealer's.

The Canadiens goaltending stability reflected these dark days as a flurry of average netminders passed through the organization in the course of the 13 cupless seasons between 1931 and 1944. While it was apparent that Wilf Cude at his best still was not good enough, no more worthy successors to George Hainsworth could be found.

The two mainstays brought in following in Cude's wake were Claude Bourque and Mike Karakas, who despite their best efforts could not lift the Habs back to glory days.

Abbie Cox and Paul Gauthier were mere replacements for an injured Cude in the 1930's, and Connie Dion, a fairly good prospect, were all the resources the Canadiens had in the day. Cox and Gauthier appeared only in a single game, evidently not long enough to have their pictures taken with the team, and Dion was never called upon as he drifted in and out of the Habs system for a few more years.

The drought of quality puckstoppers would continue beyond 1940, when the arrival of Bill Durnan combined with the addition of stars the likes of Toe Blake, Maurice Richard, and Elmer Lach would assure that the Habs dark period be a thing of the past.

For the time being, the Canadiens were simply content to have won the war of Montreal over the Maroons. Better days were coming.

Here are the bios on Cox, Gauthier, Bourque, Karakas, and Dion. 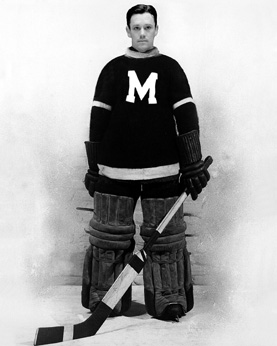 Goaltender Abbie Cox was a journeyman IHL'er who played five NHL games in his career, all as an injury replacement for a fallen starter.

Cox, born on July 19th, 1904 in London, Ontario had one year of Senior hockey and seven seasons of minor pro under his belt when an injury to Clint Benedict translated into Cox's first NHL start. Three full seasons would pass before opportunity would knock again.

Abbie Cox's NHL debut came on February 1, 1930, when Montreal Maroons goaltenders Benedict and Flat Walsh were both unable to play. The Windsor Bulldogs (Cox's club) loaned Abbie to the Maroons, who defeated the New York Americans by a 7-2 count.

Nearly four years later, while playing for the Detroit Olympics of the International-American Hockey League in 1933-34 he was loaned to the New York Americans to sub for an injured Roy Worters. The Americans lost to Detroit, 5-2, on November 12, 1933.

Later that season he made two appearances for the Detroit Red Wings to replace John Ross Roach who was unable to play. On December 10, 1933, Abbie was loaned to the Detroit Red Wings to replace an injured John Ross Roach, playing in a 4-1 Detroit win over the Maroons. In his second Detroit appearance on the 17th, he helped the Wings tie the Americans 4-4.

Finally, on February 16, 1936, Abbie was loaned to the Montreal Canadiens as a replacement for Wilf Cude. Cox held Les Habitants in the game allowing just one goal and helped them earn a 1-1 tie against the New York Rangers.

Cox had been signed as a free agent by NY Rangers, November 9, 1926 and was traded to Windsor (Can-Pro) by NY Rangers for cash, September, 1928.

The 1936-37 season was Cox's last as a hockey player. After playing 10 games with the Kansas City Greyhounds in which he was unable to record a victory he hung up his goalpads for good.

Goaltender Paul Gauthier made one appearance in the NHL for the Montreal Canadiens in 1937-38. During a career that lasted nearly two decades, the 5' 5", 125 lb goalie was a successful puckstopper in the several minor pro and senior leagues.

Born in Winnipeg, Manitoba Gauthier played junior with the Winnipeg Monarchs then made his pro debut with the Pittsburgh Shamrocks of the IAHL in 1935-36. He then played with the AHA's Minneapolis Millers and the New Haven Eagles of the AHL for one year each.

Gauthier was signed as a free agent by Montreal, October, 1937 and immediatly loaned to New Haven (AHL) by for cash.

It was while he was in New Haven that Gauthier was loaned back to the Canadiens to replace the injured Wilf Cude during a 2-2 versus the Chicago Black Hawks on January 13, 1938.

The Canadiens retained Gauthier's rights until 1942, during which time they loaned him out to Kansas City of the AHA and Seattle of the PCHL. In 1941, the Canadiens lent him for the duration of the schedule to the Boston Bruins in exchange for Terry reardon.

Between 1938-39 and 1948-49, Gauthier played on a dozen different teams in five different leagues. His best performance was 1943-44 when he registered four shutouts and a 29-10-7 record while helping the Cleveland Barons finish at the top of the AHL's Western Division standings. 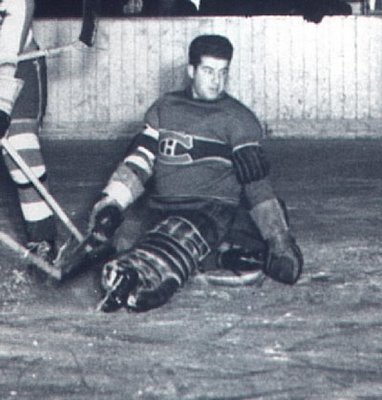 As a young teenager, goalie Claude Bourque played in the New Brunswick Amateur Hockey Association with the Moncton St. Mary's. He also dressed for his high school team and the Moncton Red Indians where he played in eight Memorial Cup games in 1933, going 6-1-1. He then spent the final two years of his junior eligibility in Montreal tending goal for the Junior Canadiens.

Bourque began playing senior hockey in the fall of 1935, playing with the Montreal Senior Canadiens, the Montreal Royals and the Verdun Maple Leafs. Heading into the 1938-39 season his NHL rights were owned by the Montreal Maroons but in September he was traded to the crosstown rival Canadiens for cash.

The trade turned out to be a positive for Bourque who was given the opportunity to play in net for the Habs in 25 games, where he posted a 7-13-5 record. Although it was rather uncharacteristic, the Canadiens were somewhat lean in goaltending talent during those years and so Bourque returned as the number one goalie the following year, despite a dismal rookie season record.

Unfortunately for Bourque and the Habs, season two was no better. He was between the pipes for 36 games, going 9-24-3. He was also loaned to the Detroit Red Wings for one game that year, replacing the injured Tiny Thompson for a game on February 15th. Bourque and the Red Wings came out on the short end of a 3-1 score against the New York Rangers, who eventually went on to win the Stanley Cup.

In April, 1940 the Canadiens decided to move in a new direction in goal and traded Bourque to the New York Rangers for Bert Gardiner, although he never again played in the NHL. He played two of his last three years in the AHL with the Philadelphia Rockets and Buffalo Bisons, where he was named a Second Team All-Star, before winding down his career with the Lachine RCAF in 1942-43. 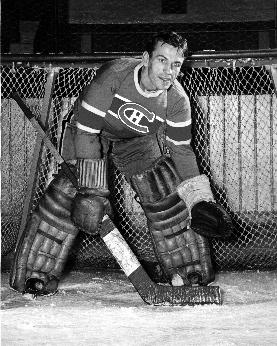 In 1935-36 he was the NHL's rookie of the year, and two years later led the Chicago Black Hawks to a surprise Stanley Cup, after the team had gone 14-25-9 in the regular season. Prior to him being loaned to the Habs, Karakas had been suspended by the NHL for failing to report to Providence of the AHL after he was demoted.

Mike Karakas was the first American-born goalie to star in the NHL. He was lauded for having one of the quickest glove hands in hockey along with outstanding balance. In eight NHL seasons he recorded 28 shutouts and a goals against average of 2.82. Karakas recorded three blank sheets in the post-season and was considered at his best in key games. He handled the puck well and was always quick to credit his defence after a strong game. 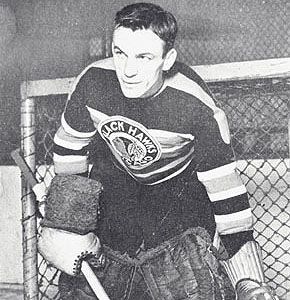 A native of Aurora, Minnesota, Karakas was signed as a free agent by the Chicago Black Hawks in 1935-36 after apprenticing with the Chicago Shamrocks, St. Louis Flyers and Tulsa Oilers. He was awarded the Calder Memorial trophy after posting a 1.92 goals-against mark and nine shutouts. Two years later he recorded a pair of playoff shutouts while leading the Hawks to an unexpected Stanley Cup championship after finishing with a losing record in the regular season.

This achievement was even greater considering Karakas missed the first two games with a broken toe and eventually led the Hawks to their triumph wearing a cast.

Karakas was suspended by the Blackhawks for remainder of 1939-40 season after refusing assignment to Providence (AHL), on December 30, 1939. He had his suspension lifted by NHL President Frank Calder and rights were loaned to the Montreal Canadiens for remainder of 1939-40 season after Montreal goaltender Wilf Cude suffered shoulder injury on February 23, 1940.

Following the disagreement, the Blackhawks, who were run by a surly owner at the time, Karakas was banished to the minors via a cash trade with the Providence Reds in 1940. They reaquired him for Hec Highton, Gord Buttrey and $10,000, January 7, 1944.

Karakas returned to the NHL in 1943-44 after starring with the Reds of the AHL. Earlier he was the hero when the Reds won the Calder Cup in 1941. He led all NHL netminders with four shutouts in 1944-45 and was a post-season selection to the NHL second all-star team. He retired from the NHL following the 1945-46 season but continued to perform heroics in net for Providence until the conclusion of the 1948-49 season.

The talented Minnesotan recorded 114 career regular season wins and helped lead the way for future American born and trained goalkeepers. During his six NHL seasons he appeared in every one of Chicago's games and earned the nickname "Iron Mike". Karakas' immense contribution to the game in his native country was recognized when he was named as an original member of the United States Hockey Hall of Fame. 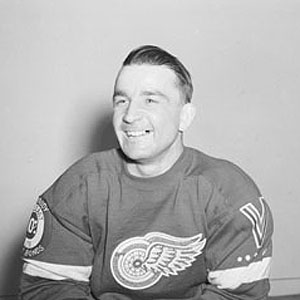 Connie Dion was a much travelled goalie, toiling in the Canadiens farm system from 1939 and 1943 in both the QJHL and QSHL.

Dion began with the Verdun Maple Leafs, both junior and senior in 1937, which included a trip to the Memorial Cup. After appearing in 38 games with the Lachine Rapides of the QPHL in 1938-39 he joined the Sherbrooke Red Raiders for a season that culminated with an appearance in the Allen Cup.

Dion returned to the QSHL beginning in 1940-41 and played three seasons with the Cornwall Flyers / Army. While there, the Canadiens traded his rights to Washington of the AHL for cash.Dion refused to report, remaining in Cornwall until 1943. He later signed on as a free agent with the Detroit Red Wings on January 25, 1944.
The little goaltender from Quebec played just two NHL seasons with the Detroit Red Wings in 1943-44 and again in 1944-45. 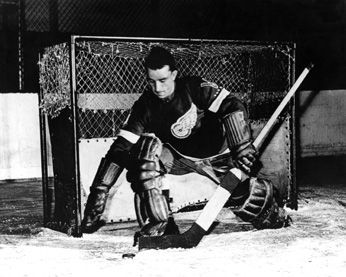 In his first year with the Wings, Dion started 26 games and had one shutout with a 17-7-2 record and a 3.08 goals against average. The following year he appeared in 12 games, accounting for his 38-game NHL career where he finished with a 23-11-4 record.

Dion played another eight years of professional hockey, mostly with the Buffalo Bisons (another Canadiens affiliate ) of the AHL. He also made brief stops in St. Louis, Houston, Louisville, and Sherbrooke, where he retired after the 1952-53 season. He was a three-time Second Team all-star selection in the AHL while a member of the Buffalo Bisons and was the recipient of the Harry Hap Holmes Memorial Award in 1949-50, which went to the goaltender with the best goals against in the AHL.

After his retirement, an arena in his hometown of Asbestos, Quebec was named after him. Dion's biggest passion was involving kids in youth hockey. His name also graces a charity golf tournament in the area.