Between Vezina And Hainsworth

Share All sharing options for: Between Vezina And Hainsworth

Once Georges Vezina arrived on the scene in Montreal, he commanded the goaltending position like no one before or since. From 1910 to 1926, the Canadiens did not use another goalie while Vezina appeared in an astounding 325 consecutive games.

During that 16 year period, only two other goaltenders passed through the Canadiens organization. Journeyman Sammy Hebert was the first, and not only didn't he see any game action, he never even made it town for a cup of coffee. The second was a mysterious signing - Eugene Decosse. No one can actually recall why Decosse was signed to the Habs at the start of the 1924 season, as he merely backed up Vezina for a game before vanishing from the teams book of record.

All that could unseat Vezina was illness, and sadly, death. Complications from tuberculosis ended Vezina's life prematurely in 1926, and the Canadiens were hard pressed to find a worthy successor. Initially they brought in U.S. Olympic team hero Alphonse "Frenchy" Lacroix, but the experiment only lasted 5 games. They turned their hopes to Herb Rheaume, who was considered the best of the Quebec junior prospects at the time.

Rheaume would finish out a dismal season in Canadiens history before one george Hainsworth brought new stability to the team and the position over the next decade.
Here are the bios on Hebert, Decosse, Lacroix, and Rheaume. 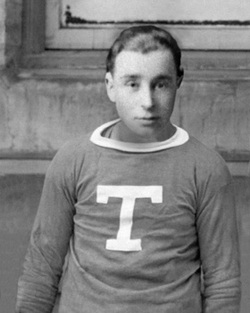 Goalie Sammy Hebert was merely a footnote in Canadiens history at a time when Georges Vezina was all the goalie the Habs would need for another decade.

Involved in a three - way trade, the Canadiens aquired Hebert from the Ottawa Senators on January 15, 1917 for Jack Fournier, then dispatched him on the same date for forward Tommy Smith of the Quebec Bulldogs of the NHA.

Hebert then suited up briefly with the Toronto Arenas and Ottawa Senators in the early days of the NHL. He was better known in the NHA, WCHL and the Ottawa senior league.

The native of Ottawa had previously played 19 games for the Toronto Ontarios of the OPHL in 1913-14 before moving up to the hometown Senators of the NHA for a couple of games. He also toiled briefly for the senior Ottawa New Edinburghs before serving his country in World War I.

Hebert returned to the game after a year's military service and spent most of the 1916-17 season in the NHA with the Quebec Bulldogs following the trade. The next year he played a pair of games as a spare netminder on the Toronto Arenas during the inaugural NHL schedule. This was followed by three years of senior hockey with the Ottawa City Cedar squad.

In 1921-22, Hebert returned to top-flight competition with the Saskatoon Sheiks of the Western Canada league. He played 42 games over two seasons for the club then returned home the following season. Hebert played the last two games of his career with the NHL's Senators as a fill-in before retiring in 1924. Hebert passed away in 1965.

Eugene Decosse, born on December 9th, 1900 in Hull, Québec, had the honour of backing up the legendary Montreal Canadiens goaltender Georges Vézina for a lone game in the 1924 season opener against the Toronto St-Pats.

In November of 1924, Gene got his chance with the NHL, joining the reigning world champion Montreal Canadiens at training camp. It is unclear exactly why he and relatively average fellow Ottawa players René Joliat and René Lafleur all got a chance with the Habs at the same time. Signed as a free agent, he headed to Toronto with the team to open the season against the St-Pats, but Vézina was in fine form, and back stopped the Habs to an easy 7 to 1 victory, leaving Gene to warm the bench.

The very next day, Décosse was headed for home. The french language Ottawa newspaper Le Droit painted Decosse's return to Ottawa as a good thing, claiming the conditions offered by the Canadiens contract were not worth throwing ones future away for a few dollars. The paper did not elaborate on what those expectations were, but they were presumably equally unacceptable to René Joliat and René Lafleur, who also returned to the Ottawa area following their lone games in the NHL. The pressure of family no doubt also factored into Gene's decision, as he was the primary bread winner in the family following the loss of his father to Influenza.

As a boy, Decosse was raised in the heart of the blue-collared area of Hull a few streets away from the E.B. Eddy paper mills and just around the corner from the Bank Hotel, which would later be owned by D'Arcy Coulson. Much of this neighborhood was demolished in the 1970's to make way for government office complexes, but his childhood house remains intact, wedged between two parking lots at 57 Wellington street.

Gene made his way up the Ottawa and Hull hockey ranks, playing for such teams as the Hull Canadiens, the Ottawa Royal Canadiens and the Ottawa New Edinburghs. Gene had his first great season in 1918-19, earning a Goals Against Average (GAA) of 0.50, managing 6 wins, 5 of which were shutouts, in his 8 appearances for the Ottawa Royal Canadiens. The next four years saw him put in good performances with three different teams in the OCHL, earning two First All-Star and one Second All-Star title.

Back in Ottawa in 1925, Gene somewhat reluctantly returned to the amateur hockey ranks and would play two more seasons with the Ottawa New Edinburghs before hanging up his pads for good at the age of 25. With hockey behind him for the time being, Gene focused on his career and founded the "L'Opinion de Hull" newspaper and assumed the role of editor-in-chief.

Described as a workaholic, Gene also took on various other positions which included the role of Provincial Finance Receiver for the city of Hull, Special Investigator for the provincial Receiver General and Director of Provincial Security for the city in addition to serving as a city alderman for two years. During this time, he would return to the newspaper offices at the end of the day to work late into the night.

Not one to sit still, Gene also continued to make time for his love of sports, which now included baseball. He took on the roles of president for the Interporvincial League and the city of Hull League. In 1940, he built Décosse Stadium which was the centre of baseball activity for a decade before outgrowing it's needs, and falling victim to expropriation to make way for office buildings. He also served as director of the National Baseball Team in Ottawa and as manager of the Ottawa Auditorium.

In 1936 Gene returned to hockey as a coach, putting together the Hull Volants team from what was described as "leftover" players. Against all odds, the team had a great season and went on to win the OCHL championship, earning them a birth in the Allan Cup's eastern finals, were they were later defeated.

During the Christmas holiday season of 1954-55, the long hours of hard work and volunteering caught up to Gene, and he was admitted to hospital following a heart attack. On January 2nd, 1955, he succumbed to heart failure, leaving behind his wife and son. As the city he had given his life to continued to grow, Gene's contributions were honoured with the naming of Décosse street. 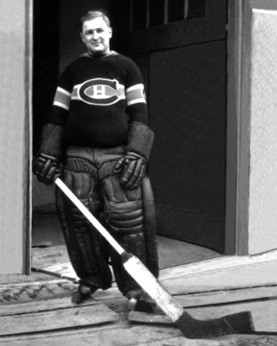 Goalie Alphonse "Frenchy" Lacroix was signed as a free agent by Montreal, November 10 and played five games for the Montreal Canadiens in 1925-26. He had previously been known from playing in the minors and in the Boston area senior leagues, before gaining fame for backstopping the 1924 U.S. Olympic squad.

The native of Newton, Massachusetts was a standout on his local high school before joining the senior Boston Navy Yard and AA Unicorns. "Frenchy" remained with the Unicorns when they joined the USAHA and posted a 4-1-0 record for the United States when they won the silver medal at the 1924 Chamonix Olympics.

The Montreal Canadiens had been backstopped by Georges Vezina for every season, but their first, up to the 1925-26 season. Vezina had played every exhibition, regular, playoff and Stanley Cup games for the Canadiens since 1910. When Vezina started coughing up blood in their first game of the season, there was no choice but to go to Frenchy Lacroix.

The Canadiens posted a 1-4-0 record in Lacroix's five appearances. Complicating Lacroix's existance with the Canadiens was a contract that termed him as being "on loan" from the Boston senior league. While the Canadiens hoped he would be a more long term solition, a resolve could not be worked out. The next year he was the club's spare goalie but did not see any game action.

Lacroix returned to the minors and played in the Northeast and Can-Am Leagues before retiring in 1931. Lacroix was the first American goaltender used by the now storied franchise. Previously, he had been the hero for the U.S.A. team at the 1924 Winter Olympics at Champioux, France. Lacroix took the American team to the gold medal game, having shutout his opponents in the four games leading to the final. The Canadian team managed to beat him for a 6-1 score and the gold medal.

After his playing career ended Lacroix stayed on in Lewiston, Maine. The town became his home and he was often seen at banquets honoring local teams. For several years he served as a professional hockey scout. He also followed the play of his two nephews, Dick and Jean Malo, who competed in the Lewiston-Auburn area. 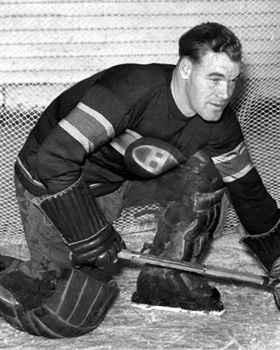 In 1925-26 season, the Montreal Canadiens were a team desperate for a starting goaltender. They had lost the backbone of the franchise, Georges Vezina, in the first game of the season, whose career and life were terminated with a serious bout of tuberculosis.

At first the team tried Alphonse "Frenchy" Lacroix, the goalkeeper from the 1924 USA Olympic team, but the NHL could not loan their only designated backup goaltender for the full season. In mid-December the Canadiens signed Herb Rheaume to a contract and immediately threw him into action. For the rest of the season Rheaume would stand between the pipes.

The native of Mason, Quebec played his first organized hockey in the Ottawa area before moving on to Hamilton senior team, of the Ontario Hockey Association. After 1920-21, Rheaume moved on to Boston and New Haven before returning to Quebec. Herb played two seasons in the ECHA with Trois-Rivieres and Quebec before joining the Canadiens. Rheaume was considered the best Quebec prospect at the time, which was essential for the Montreal Canadien image. Vezina had been the local hero that drew crowds wherever the Canadiens toured.

Herb Rheaume made his National Hockey League debut at Madison Square Garden in New York City. The game happened to be the first regular season game for a New York based hockey club in the NHL. It was the Americans debut on home ice and everyone from the Mayor to the Governor General' s Foot Guards Band was present. Rheaume was beaten by Shorty Green in the first period but held the fort after that play. The Canadiens tied the score and went ahead in the second period. Howie Morenz rounded out the scoring in the last frame. Rheaume had won his first game and ruined the New York Americans debut at home.

Although he only played for one season in the NHL, Herb Rheaume did establish a mark among goaltenders. His ten wins set a record for most victories while serving only one NHL season. Hec Highton later tied the mark and Harvey Bennett. Rheaume's career took him to the west and eventual settlement in Vancouver, British Columbia. It was there that he died on January 1, 1953.