Share All sharing options for: Welcome Back Habs, Kovalev! 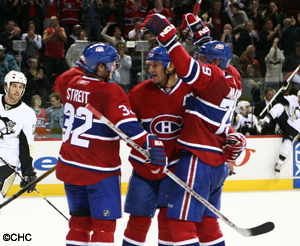 Yesterday started out as a good one for me. I finished a 12 hour shift at 7 in the morning and walked outside to relative sunshine and warmth. Not only had the day been anticipated and calendar circled for some time for hockey reasons, but it's anticipation gathered extra steam about two weeks ago with the announcement that my rock 'n' roll buddah was about to tour again, with tickets going on sale September 17.

So after bagging a pair of tickets to see Bruce Springsteen and the E Street Band in Ottawa on October 14, what could possibly make this day better? My daughter making travel team after potting 5 goals in an exhibition scrimmage?

A Canadiens win in their first preseason game would cap it off nicely!

In town for the occasion, are the Penguins, Sidney Crosby show, and Angelo Esposito sideshow in tow!

We'll have to wait for Lapierre and Latendresse in tomorrow's game.

With my eyes dimly open from three two hour plus sleep shifts, I set a hazy gaze for RDS, primed to watch the likes of the Kostitsyn brothers, Chipchura, Carle and Lahti in particular. I also looked for a spark from Milroy, Archer, and Locke, who have been given one more attempt at latching onto to the big leagues before Gainey begins to make call assessing their worth.
For a first game, this was one impassioned and thrilling debut.

The players played as though it were more than just a few roster spots on the line. It was as though much more were at stake or there was something to prove.

One game hardly constitutes a ressurrection, but the look in his eyes was encouraging.

Two other standouts, were Markov and Komisarek, whose play this season will go a long way in determining the Habs faith.

Montreal dressed 10 rookies while the Penguins were missing only the likes of Roberts, Whitney, and Malkin. The fact that Montreal were even able to match up despite the edge in experience is a great and telling sign.

Several of the players looking to make the team had very good showings, but none better than Kyle Chipchura. As previously reported, I think the Canadiens have a special player here. While he did commit a boob or two, he played a strong game. It's easy to see why the organization is so high on him. There's a spot for him in Montreal and it looks after last night that it is his to lose.

Chipchura is not blessed with blinding speed, but does have the intsincts and smarts of a defensive specialist in the Gainey and Carbo mold. He knows his positioning to a fault, places the puck intelligently when clearing, and pursues the puck with zeal. He killed off penalties all game and came close to notching a goal. He received an appreciation hand from the crowd on his way back to the bench.

It took awhile for the game to gather some juice and after both Carle and Archer went down to injury, the game gathered pace.

In that, there was the silver lining of seeing just how well, not only Mark Streit, but Josh Gorges played under pressure. Gorges was a discovery last night, thriving when overworked. Being used in every sense, he showed an uncanny ability to win the board battles and clear the net.

Streit was a pillar on this night as well. Against the speedy Penguins, Streit surely wanted to show coach Carbonneau where his preference for playing was. At this point, Streit is a more flexible option on the backline that either Bouillon or Dandeneault.

The Habs backline looks to have more depth than initially given. The pressure will be on Bouillon, Dandeneault and Brisebois to match these performances.

Up front, both Corey Locke and Mikhail Grabovski demonstrated skill and had decent moments. locke let fire a pair of blasts, one good for the second goal. He looks intent on seizing his final shot a the team. Grabovski reminds me of none other than Russ Courtnall - a gazelle often too fast for his own puck.

Grabovski oozes talent and skill, but lacks some finish and size to make his anything more than a one dimension player for now. He produces sparks with no result and needs to look around himself more to assess option and open ice. You hate to tell a guy of his stripe to slow down so others on his line can play with him, make better use of him. But that is where I feel he is at and this is the teaching he needs to adapt. If he manages to learn this, he will be a treat.

Other rookies were a little less consistant, and the performances varied from player. Janne Lathi had seconds of great coherence with Kovalev, but not much else to make anyone rave and shout. 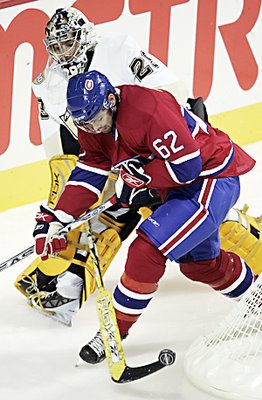 Duncan Milroy has the tools to be an NHL'er right now, if not in Montreal. Despite his fringe nature, he does have a good portion of the tools required to be a regular. Milroy's effort never wanes, the hits are there, and the grinding nose to the glass effort never wanes. Unfortunately for Milroy in Montreal, he might just be another number ready to be outnumbered.

Oddly, I see him as a prototypical Bruin coming back to haunt the Habs. I'm not sure why I sense the deja vu!

Jonathan Ferland took a nonsense penalty in the first period that propably bought him a one-way back to Hamilton. He does have that needed rugged edge, some speed, but it will be hard for him to outshine anyone on his fourth strike.

Sergei Kostitsyn dittoed Lahti's night. He showed flashes of a bigger game countered with moments of being absolutely looking lost. One one PP, he was set up in the corner, stood there mostly and watched. Despite the lost look, it is undeniable the talent he has. He will crack the shell at some point. What he's going through is often what occurs to go-to guys when moving up to a higher level. He's dealing with less puck time, and movement and adjusting his position are his next lessons. The Habs know exactly where he can gather this information.

As for the Habs regulars, it was the Andrei Kostitsyn and Kovalev show for the most part. Makes me wonder what would occur should the elder K ever be made into a centerman, he seemed such a suitable foil for Kovalev. Finding such compatibility for Kovalev is about as rare as stepping in Pope shit. Hopefully the duo lasts.

The newly aquired Tom Kostopoulos made a good pair with Chipchura on the penalty kill. He'll be a handy player to have around against grittier team. I just worry he's a Mike Johnson clone with no bite behind the bite.

Both Cristobal Huet and Yann Danis played well. Huet was faultless but neither was tested to extremes. Huet did show that he is still the Habs numero uno in nets, so I'm almost ready to call off the goalie battle for now.

Tomas Plekanec was true to his reputation on the penalty kill, but otherwise out of sync in a game with unrolling lines. No worries, he'll get his groove.

The surprising intentisity of this game had much to do with the fact that the Habs and Penguins are rapidly carving up a deep and rabid hate for each other. What with Crosby's whiner and faker tactics on high to get everybody going, sparks didn't take long to start flying. Add in Ruutu's behind the back acts and Armstrong's gutless tactics and you have a rivalry ready to escalate into war proportions should these teams ever set foot on the same Conference Final ice.
That day might not be so far away, folks.

I took great pleasure in watching Komisarek give it good to Crosby over and over. It's a great game when he and Markov are holding up the Habs end against the best player in the game.
All that was missing tonight was Max Lapierre's gunpowder!

Tonight's rematch should be a fitting sequel.

On a Penguins related sidenote, many Habs fans were fearing that Angelo Esposito would re-enact the Denis Savard homecoming of 1980 and make Bob Gainey look like a patsy of a GM.
Didn't happen. Wasn't even close!

No arguments will be ignited in his name anytime soon. I had to squint to believe my eyes that Esposito was so nothing - not even worthy of an adjective yet!

The stage is well set for tonight. Can the game live up to billing in pre-season.

"I can handle more of this", said the starved man to the soup!