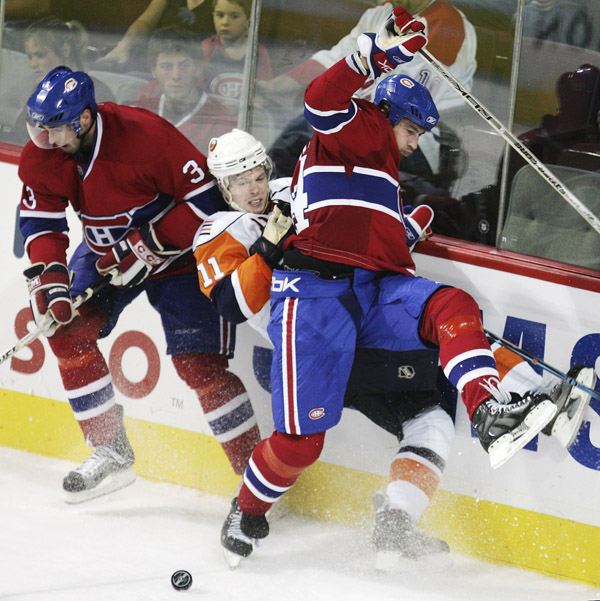 Warning to the veteran defenders of the Habs blueline, you are about to be bumped!

Ryan O'Byrne, who I like to call "Rhino Burn", due to his size and fierceness, is about to steal someone's job in Montreal and Mathieu Dandeneault, Francis Bouillon, and the barely pencilled in Patrice Brisebois will be in for a season long dogfight for slim pickings of ice time - should they hang on that long.

The Canadiens blue line corps in order, consists of Markov, Komisarek, Hamrlik, Streit, Gorges, and Cube and Dandy along with O'Byrne battling it out for the sixth spot.

Nine defenseman for six slots is a problem every coach and GM wish they had.

I see Rhino Burn thick in the mix for reasons that make nothing but common sense to me. Here are some:

He brings an element that only one other Habs rearguard, Komisarek, offers. Most teams like at least four D-men of size. We have two!

He possesses an upside that Bouillon and Dandeneault no longer have. The Habs know that Cube and Dandy at their best will not make the Canadiens a better team. Brisebois - forget it!

O'Byrne's continued development depends on being challenged by bigger and quicker NHL talents.

He's proved his worth with Hamilton last season, getting stronger as the playoffs progressed. 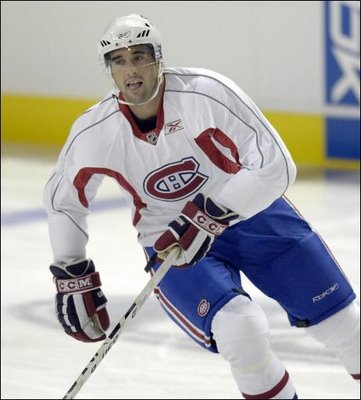 In defense of Bouillon and Dandeneault being surpassed by both Gorges and Rhino, let's examine what each of the players bring to the team.

Bouillon is a tough and likeable rock, albeit vertically challenged for today's game. He can drop 'em and sock 'em while standing tall ( ! ) for the team, but he is not going to strike fear into many opponants. However, if he played 82 games against Darcy Tucker, he'd be on a Quebec postage stamp. On a team with depth on defense, he is a spare part at best. There are several good aspects to his game, but none make him rise above the pack. He was once waivered by the Habs, spent the weekend in Nashville and returned before anyone noticed he was missing. Where Bouillon was once a candidate for slivers of PP minutes, he has lost that perk to Streit.

Dandeneault, has never been speedy, and yet he seems to have slown. He was once rather effective clearing his zone, but now seems to panic some when clear alleys do not present themselves. Dandy has average size for a defenseman and still gets outpowered along the boards and in corners. He has great experience, being on Cup winners in Detroit, where he was a role player in their scheme of things. The Habs aren't the 1998 Red Wings. One bonus of Dandeneault's game was that he could sub at forward, thus allowing the team to dress 7 defenseman without compromising the state of its fourth line. Streit has robbed Dandy of this also. As an insurance policy as a seventh or eighth blueliner, the cheaper variable would be Brisebois.

Gorges has surpassed both players in the Habs esteem. He is also younger than Rhino. He will need some time to adjust to the Habs way of doing things. Already he has shown good passing skills and seems more composed in traffic than the others. Gorges will rarely be flashy in a city that loves its spice, but he has a background of being quietly effective while going unoticed for good reasons.

The Canadiens will start the season with eigth defenseman, meaning there will be one casualty after the weekend is out.

Gorges won't be cut as he would not clear waivers to the AHL.

Bouillon has been there and back, and it's doubtful he would draw interest despite how much Habs fan enjoy his combativeness.

Dandeneault is a declining asset who carries the largest salary of the three. Should Gainey not find a taker for him on the trade market, the option is to give him away by waiver.

The bottom line is that the Canadiens have strong prospects at the position for years to come. The plan would be the gratuate them in order or at least give them trial NHL runs to see what each are made of.

It is O'Byrne's turn now, simply because of what is coming in after him in highly touted players.
The wild card on defense remains Alexei Yemelin, who unwisely chose to play an extra season in Russia. Had he been at camp, reports are he was an automatic top six had he dotted the contract line.

With Yemelin still a possibility for next season, finding out what O'Byrne is made of becomes a priority now. Next season the Habs will give focus to the likes of Valentenko and Carle, soon to be followed by Fischer, McDonagh, and Subban.

What are they going to do with all this talent in about three or four years?

Today's bubble players will be a memory then and Komisarek will be staring down a long term deal. Markov and Hamrlik, should he still remain, would be going into their option years.

What this all means is that the evaluation process is a constant. The only difference now is that the stakes aren't as high as they will be then.

Sweating losing a Bouillon or Dandeneault, if Gainey is on target, will be looked back on with hindsight laughter by that time.

If the Canadiens want to play bigger, Rhino is a good starting point.

If the team wants to improve while building young and fresh, promoting O'Byrne makes a ton of sense.

The Canadiens can't keep speaking of the future in one corner of their mouth, and whisper that's not quite ready out the other corner.