Share All sharing options for: Waivered Players Place Gainey In A Catch-22 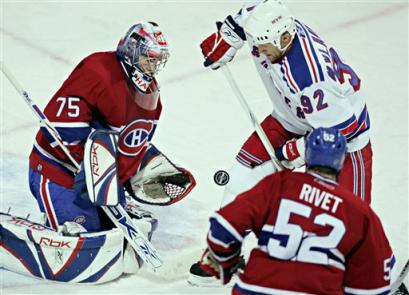 The axe has fallen on the chances of 29 Montreal Canadiens hopefuls as GM Bob Gainey announced departures for Hamilton earlier today. Twenty seven players will be reporting to the AHL club while 2 more are being returned to junior.

Among the players backing their bags were training camp surprises Matt D'Agnostini and Sergei Kostitsyn. Both performed above standard and it was expected by many that they would remain with the club at least until the closing of camp.

Of the remaining demotions, perhaps Janni Lahti, who signed an NHL contract with Montreal after fielding several offers, comes as a bit of a surprise. Thomas Beauregard, who scored 71 goals as an overaged junior last season may also be disappointed some after exceeding expectations in camp.

Nine players from the group that was sent down must clear 48 hour waivers to end up in Hamilton and they included goaltender Yann Danis, defensemen Mathieu Biron, Andrew Archer, Jamie Rivers, and J.P. Cote, and forwards Corey Locke, Duncan Milroy, Jonathan Ferland, and Cory Urquhart.

Those same players clearing waivers, would also have to clear them once again if recalled by the Canadiens at any point during the season.

In recent years the Canadiens lost defensemen Francois Beauchemin and Ron Hainsey on the waiver recall wire, and it can be expected that the Habs may suffer up to four more losses from this curent bunch.

For starters, Yann Danis ought to be goners. The Los Angeles Kings have questions in goal and Danis has shown he is solid enough to be an NHL'er.

Corey Locke, Duncan Milroy, and J.P. Cote are also succeptible to being snapped up. Locke, who was the AHL's playoff scoring leader could find a home in as many as 10 cities. His salary makes him worth the risk as well.

Don't be surprised if the Ottawa Senators make a pitch for Locke. The Sens farm system has gotten rather thin in recent years. Ditto for the Leafs, who in truth, has rarely even had a system.

Other teams with thinning areas such as Phoenix and Columbus would love to get something for nothing also. 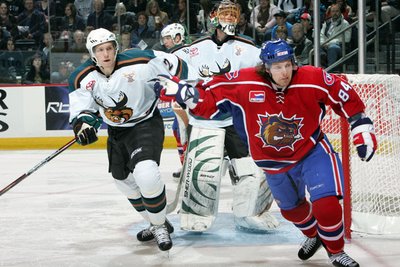 Fans of course, will question certain moves and motives by the team in the decisions made today.

"Why couldn't Gainey trade some of these guys", they will chant!

In many of the scenarios regarding players sent down, the hands of GM Gainey are tied. He's coming under some unfair criticism for not dealing these assets away before losing them for nothing.

It's always easy to criticize but one should understand what Gainey is up against when talking trade for some of the players.

When Sam Pollock was pulling rabbits out of hats three decades back, the draft was not limited to seven rounds as it is now. There were plenty of late round picks to barter off with less risk.

Today's 6th and 7th rounders serve to fill out AHL rosters and are more in need than before.

Another issue is that teams who finished below Montreal last season, ranked 1 to 11 in waiver pickup order would just as soon use the waiverline to pluck the player for nothing. With every NHL team about to place players on waivers in order to send them down, the Canadiens players are not a rare commodity - so why trade for them. Teams that finished ahead of Montreal, are generally just as well stocked and have little need for these wayward Hab hopefuls.

They in turn have their own players they are trying to avoid exposing and should they pick a player on waivers it just mean they have another they cannot protect under roster limits.

Ask yourself what those teams would be willing to offer Montreal for any of the players sent to Hamilton.

The correct answer is sweet nothing!

How can Gainey bargain without leverage?