Guillaume Latendresse Could Be The Next...

Share All sharing options for: Guillaume Latendresse Could Be The Next... 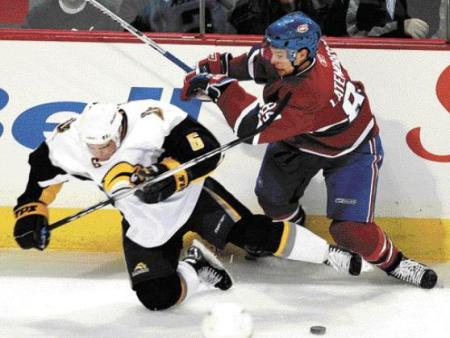 One of the least talked about positive aspects, rising from a darkened Habs 2006-07 campaign, was the surprise that became Guillaume Latendresse. The nineteen year old young man, who scored a decent 16 goals in his rookie campaign, was something of a revelation in more ways than meets the eye.

Some of this surprise had to do with his game, which could be held up under a microscope as a case study on the effects of watching a player of great upside develop under pressures and demands.

His play panned out quite well, but what impresses me most about Latendresse has to do with who this young gentleman is, and the person he seems to be molding himself into.

Latendresse was something of a controversial addition to last seasons Canadiens team. Prior to making the big team, his play had suffered dips and drops, and many felt he was not quite ready for the NHL at such a tender age.

Brent Sutter, coach of the national junior team, was hesitant to give Latendresse a larger role at the 2006 WJC because of certain perceived liabilities in his game. Latendresse never huffed, and accepted the criticism while turning it into a learning experience.

Latendresse also had to deal with the ever prominant questions of language and politics meddling into his attempt to make the Canadiens. Being Quebec born and raised in the Habs backyard, it was loudly suggested that he made the team because of a feared public relations backlash alone.

At times it seemed the entirety of the french media and the teams fans were caught up in the hoopla surrounding his potential for making the team. The only one not caught up in it, seemed to be Latendresse himself.

Many naysayers missed the point that the argument largely in Latendresses favor was the undying fact that he'd led the team in pre-season scoring in back to back training camps in 2005 and 2006.

Alas, the young man made the team, which elicited every conceivable response, from whines to cheers, for all possible concerns. Overall, fans and media were generally happy about the decision made by coach Carbonneau and GM Gainey, but many suspected the move had linguistic undertones.

Latendresse had earned himself a fourth line role, starting with an average of eighth minutes playing time per game, while getting accustomed to the rigors of NHL life. Not to mention the spotlight of the ever present Montreal media.

He kicked off his NHL career with all the wallop of a wet kleenex, ringing a bunch of goalposts along the way to a pointless 13 game unstreak. The big winger would play some solid games while countering them with shifts so dismal, he looked like an out of place teenager.

Coach Guy Carbonneau's advice to the winger in tough times, was to continue working hard, learn the teams systems, get involved in the play as much as possible, and most importantly, continue to use his size to his advantage in the along the boards and in the corners.

The coach also advised him to mix in with teammates, relax a little, and enjoy his learning phase.

Teammates testified that the youngster was a hard working individual in practices. While being quiet, and not getting down on himself, he continued asking questions of veterans. Taking Carbonneau's advice, his play steadily improved and soon he was creating more and better chances for himself and his ever changing fourth line linemates.

Things gradually came together and the improving Latendresse looked less labouring on the ice than he did in earlier games.

After a handful of games in which Latendresse seemed to be ringing every other shot off a post or crossbar, it was a credit to his character that he only became more encouraged as time passed. Carbonneau rewarded the player's patience and effort when winger Chris Higgins went down to injury. Latendresse was spotted on the teams top line and responded almost immediately.

He applied the hard earned lessons on the fourth line to the first, and waited for the payoff
The role change ironically coincided with a very public critcism of the Canadiens handling of Latendresse by former Habs goaltender Patrick Roy.

While Roy's ulterior rant had an interest point to make about junior aged players, he likely misread Guillaume's maturity in dealing the situation. Just as it seemed the whole of Quebec was prepared to take Roy to task on his misplaced opinions, it was the player himself who handled Roy the best - and most tidily.

Without a notion of arrogance or misplaced pride, Latendresse spoke disappointedly of Roy's words, while mentioning his own age and all he had to learn. He then, using words carefully chosen, wondered why Roy would make himself look so childish with his snide comments.
Well, nobody saw this left hook coming!

Roy, on the eve of his Hall Of Fame induction, and somewhat humbled knowing how he was K.O.'d, met with Latendresse, explained himself and apologized. When asked about it afterwards, all Latendresse would offer up of the short conversation was that all was well between himself and the legendary goaltender.

Many took note of Latendresse's demeanor during the whole affair. Some suggested that class of this sort is rare amongst 19 year old NHL'ers. They weren't wrong.

The uneeded extra spotlight was then firmly and somewhat unjustfully placed on Latendresse. After a game or two he began looking quite comfortable on the top line, as his solid play staring producing goals and assists at regular intervals.

The success he achieved while on Saku Koivu's line however, did little to alter the boys composure. He surpringly kept a level head, continued his hard work, while learning as much as he could. He understood that upon Higgins return he would be sacrificing his inherited spot on the top line and heading back down to the cracker crumb shifts of the lineup. 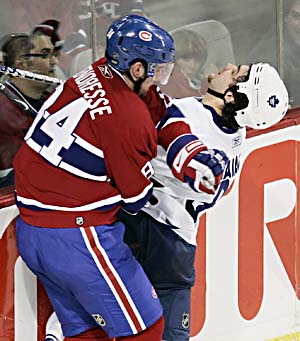 What pleased many to hear again, was Latendresse saying that it was best for the team and that his role was secondary in the decision. He would take his experience and apprenticeship and use it to make the Habs fourth line even better. He spoke like a veteran, without a hint of rhetoric.

Surprisingly, once more, he accomplished what he spoke of. In his first five games back at his former role, he continued to put up numbers. A goal here and there, a two assist performance one other night. It didn't go without being noticed.

At one point, Latendresse was tied for sixth on the team in scoring - eighth among league rookies. Supremely good stuff considering his age and the slow start he fought through. Besides his points total, he finished near the top in the hits category among rookies and amongst the league leaders as well.

While watching an RDS pre-game show for a game in Florida near mid-season, I was hit by an observation made by a Quebec actor who was being interviewed in his seat in the stands.

The actor, whose name still escapes me, had at one time been involved in the french hockey miniseries "Lance Et Compte" He now lived amongst a large contingent of displaced Quebecors who call Florida their winter home. He sat with a half dozen friends, all decked out in the Habs red home jerseys - hardly an uncommon sight when the Canadiens are in town.

The actor answered a few questions concerning his acting career before the interviewer gave him a 360 spin to show off his Latendresse signed # 84 jersey.

The interview then shifted to talk of the player, and the actor mentioned that many of the jerseys worn by the assembled Florida Quebecers also were adorned with #84's. During that morning's skate, which they also attended in red, white and blue, they were noticed by the player himself.

After the practice had ended, Latendresse strolled over for some eye contact and nods and ended up shaking some hands. He signed some autographs and jerseys, and spent a good time chatting it up with his fans. It was an appreciated gesture by the sound of it.

The actor spoke of how Latendresse seemed aware of his public and how decent he acted in their midst. He mentioned that the youngster seemed very much aware of how he is perceived by a demanding hockey mad public. Latendresse spoke kindly, while never letting the group feel as though they were being rushed.

With a gleam in his eyes, the actor noted the ease of the player's manner in how he handled the adulation of the group and how he seemed a savvy veteran in this light, rather than a rookie in his first NHL steps.

As Guillaume was surrounded, and smiling, he deflected many of the superlatives cast his way by inquiring more about his fans and their takes on things. He seemed as curiousof them, as they did of their star player.

It struck the actor oddly - the casual friendliness of the exchange was refreshingly simple.
He perceived Latendresse as an individual who doesn't take himself for something any more special than the person on the street. Grounded, thoughtful, and willing to do what is being asked of him, no matter the foolishness of the demands.

The actor suggested that if the player is able to remain who he is, and be himself all the while becoming the player most believe he can be, that he has the potential to deeply impact the Quebec public in way only a few french Canadian players previously have.

Then, dropping a name rich in Canadiens heritage, the actor took me aback somewhat with his comparison.

After considering all the actors points, I had to agree..

With his popularity, his manner, coming stardom, and common decency, he said Latendresse could come to mean something way bigger in importance to his fans.

The name he mentioned?