Share All sharing options for: More News Than You Can Shake A Stick At: September 12, 2007 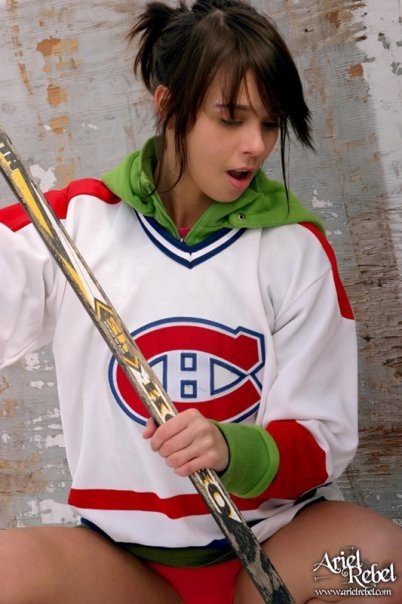 I must admit that it is quite the change of pace from the slower trickles of the summer and I will be hard pressed to keep up on every detail between games and days off. Long elaborate posts on singular subjects must now give way to more concise summations of fact and opinion.

The shifting of gears means that I must now crank it up from the casual mode into that of a multitasking ambidextrous schizophrenic cockeyed splitscreen scribbler with a mental notepad of unlimited space and proportions.

Occasionally, I will be posting in a random news style in order to tackle batches of subject matter at once. In stretches between games, you may find me jutting out these quickies, as I like to touch on just about everything that occurs with the Canadiens, from perimeter matters to the analysis of games and players.

So in that spirit, here is the first of many "More News Than You Can Shake A Stick At" columns. Enjoy!)

Last week the Canadiens official website paid tribute to former Habs captain Pierre Turgeon on the announcement of his retirement, which I found extremely odd and uncomfortable.

Apologies accepted if you blinked and missed Turgeon's captaincy. The player nicknamed the "Tin Man" is best remembered as the captain who carried the torch from the Forum to the Molson centre in a ceremony of great fanfare over a decade ago. Turgeon spent less than two full seasons with the Canadiens, enjoying a great 1995-96 campaign before bolting early in the following season. 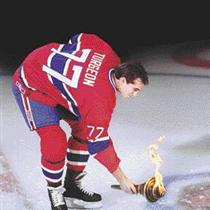 In 104 games with the Canadiens, Turgeon notched a dandy 50 goals and 77 assists, adding another 6 points in 6 playoff games. Playing with the likes of Vincent Damphousse and Mark Recchi, and rookies Saku Koivu and Valeri Bure ( both 20 goal men that year), Turgeon was the last supreme offensive talent the Habs have had.

Early next season, with Koivu rising to the top of league scorer's, Turgeon dropped down to 3rd line center behind our present Finnish captain and Damphousse, and the pressure of playing in Montreal got to him. He approached weak kneed GM Houle and his trade wish was quickly exorcised.

He proved he meritted the nickname in that gutless moment, and would never again achieve such heights in the remaing 10 years of his career.

Greatest Hockey Legends has a succinct write up on Turgeon that squarely opens up the question of what would have been, had he only been more mentally tough. Maybe "Scarecrow" is a more fitting moniker.

Le Journal De Montreal columnist and Hockey Hall Of Fame honouree Bertrand Raymond has been one of my most profound influences as a writer. Despite that he writes French columns, his usually balanced perspective made him a french Red Fisher in my thinking. Fair, to the point, and honest, were his trademarks. I've read and enjoyed him for decades as a refreshing read, a trusted and well informed source. Compared with the bombastic La Presse writers who pounced on every linguistic issue of the Canadiens fabric, often "creating" their own headlines, Raymond always saw a bigger picture and perspective. 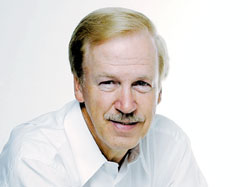 The Raymond I know now, is not the same enshrined and honoured writer I grew up respecting. He takes timely swipes at the Canadiens management for every language issue and does not seem to envision the team beyond its present season. He previously gave it good to the Habs for passing on Angelo Esposito at the draft, and is now kicking up dog dropping over the Canadiens passing over of David Perron in favor of Max Pacioretty.

In successive columns this week, he questions the Habs modus operendi and seems particularly ticked at the teams favoring of American prospects in recent drafts. Not once does he bring into the equation the 5 five year waiting period the Canadiens benefit from by choosing U.S. college grads. Raymonds pieces of late have all have that similar tendency to leave arguments balanced in his favor by omitting such crucial facts.

I call that irresponsible writing.

Anymore and I'll call him a closet separatist.

Nowhere does he make note that 3 of 4 players receiving invites to the Habs camp are QMJHL players either.

It's one thing to be proud when players of your own heritage succeed. It's quite another to almost demand the team favor locals over superior talents. Perhaps it is Raymond's mistrust of the Gainey - Timmins - Gillett triumvirate that runs the team that snorkles mustard up his nose.

In fairness to Raymond, he wrote to his previous standards in a column dated September 6, 2007 in defending the idea of retiring Gainey's number. The balance of seeing the coins two sides are well exemplified here. It was a great masterstroke of pulling apart a conundrum in Gainey's heart.

Should Raymond not continue in this latter vein, he will be more suited to La Presse's divide and conquer journalism style. Retirement can't come soon enough.

Kudos to the Toronto Maple Leafs for sticking with tradition!

Oh wait, did they?

What tradition is that you ask?

Talk about a low key unveiling! These new Leafs duds (I won't even picture the boring scan!) look like practice pullovers, the are so scant in detail. They have lost the horizontal color bars at the base and gone for a big blue meanie look. Not sure that it works without the proper team to fill them. For now they remain smurfish to me, and will always look this way in either regard. 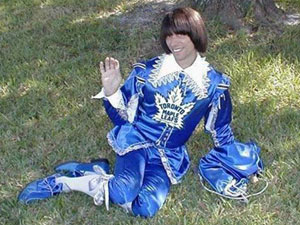 Granted, they could have done a lot worse, as other teams have.

Are you like me in that you sick as a dog reading about Daniel Briere?

Enough already! Go to the above link for the Turgeon retro piece at Legends, read it and insert Briere's name each time you read Turgeon's.

I like Briere. He plays with character, but unfortunately doesn't think with it. Count me in with those that believe he would only have added to the Canadiens an element they already possess - small forwards with speed.

While Briere would surely have been the best offensive talent in our ranks, he cannot be a difference maker on the Canadiens. We need size, muscle, strength, and character. Briere just doesn't score ten on ten in any of these categories. 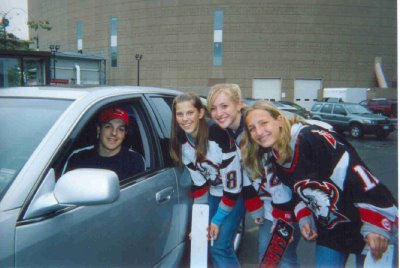 At the cost he would have come with, the risks simply weren't worth it. Briere surely paid attention to what happened last season when Samsonov tanked in the spotlight and got goosebumps. If the player can't get past the Montreal pressure question, it tells us all we need to know about whether he has the required character to succeed in the land of 100 Million Pucks.

What gets my snot in a ball is the constant second guessing and analyzing that has followed his "thanks, but no thanks" to Habs brass. The Habs made all the effort required to sign him.

So what if the team prez Gillett tags along to meet him, or whether he was or wasn't guaranteed a certain standing on the team's line's. The player choosing the easier road is not the kind we need.

Now why isn't anybody writing about that?

While the "insiders" word makes me twitch a little, the site is quality from top to bottom. It has interviews with players, Q & A's, prospect analysis, and more. Favorite them today!