Share All sharing options for: The Montreal Canadiens 100 Trivia QuestionPrimer In order to celebrate training camp opening in a little more than a week's time, and my kids going back to school, I am launching today, THE FIRST ANNUAL EYES ON THE PRIZE HABS TRIVIA CONTEST!

Don't hold your breath for a prize thought folks, other than good old fun and bragging rights!

Readers can wager amongst themselves all they wish, and I'd love to hear about any bets between participants, all in the name of fun. 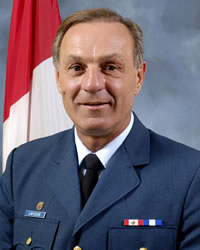 Here a few simple rules and guidelines to follow.

First off, there will be no comments posted for this contest at this site. What happens with these questions at other sites or boards is beyond my control, but I will not respond to them there either. You can take answers posted on HF boards and the like for whatever it is worth. No comment!

All answers are to be submitted by e-mail.

If there are concerns, or if one wants question clarification, my e-mail is: realitycheck-time@hotmail.com

E-mail me about any query regarding the questions or format, I'll offer you anything except the answer until the contest is closed.

The winner will be announced as soon as someone nails all 100 questions or on October 1, 2007, whichever comes first. For reasons having to do with sanity, I will be limiting the post to 100 entries, at which point I will be listing all the scores and posting a winner. I will update the number of entries on a daily (or as close to it as possible) basis.

Participants can enter as often as they wish, just simply let me know in the e-mail if it is your second or third entry.

The contest will be closed when I receive my 100th entry. I will not respond to e-mails received the day after and beyond. If you submit after that time, you will simply have to wait until all answers are posted then to see how you ranked.

There are ten (10) question per decade of the Canadiens history. Points per question are weighted by decade to give more recent fans a fair chance. Some questions contain multiple answers and points will be noted in this fashion: ( 1+1+1 ) or ( 2+2 )

The value of each questions answers follow the questions. The 100 questions total 300 points.

Winners per decade, and runner's up will also be announced.

Total scores of all entries will not be disclosed until after October 1, 2007.

Warning to all - Googling won't find you all the answers - you will have to be well read to win, so read some books and sites if you want to claim those bragging rights. The answers to about 20 of the questions may actually be found in the archives of Eyes On The Prize over the past year.

My resources for the questions have included several popular books and sites based on the Canadiens and the NHL. Once the answers are posted, I'll accept challenges to those answers, if need be. 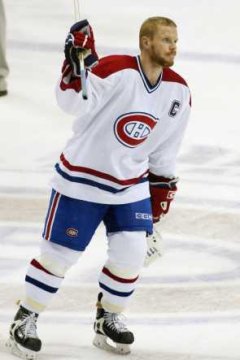 1 - Upon arriving with the Canadiens via a trade, this player likened the media frenzy to the circus surrounding Michael Jordan. Who was he? ( 4 )

2 - What was Jose Theodore's prescribed medicine for thinning hair? ( 4 )

3 - Which player stated that Saku Koivu's courageous return from canver was "One of the most amazing things I've ever seen in hockey?" ( 5 )

4 - In the season in which Saku Koivu was diagnosed with cancer, who was the only player to wear the "C"? ( 3 )

5 - What number did goalie Olivier Michaud wear in his only period of play with the Canadiens? ( 4 )

7 - Prior to Vincent Damphousse scoring the first goal in Molson (Bell) Centre history, another Habs player had what would have been the historic goal disallowed? Who was he? ( 5 )

8 - The last Canadiens goalie to start his NHL career with the Habs in shutout fashion. ( 3 )

9 - Which Canadiens player, after the final game played in the Forum, scooped up a hunk of ice that he promised to keep refridgerated for his lifetime? ( 4 ) 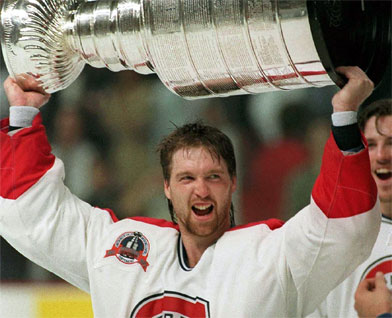 15 - Who did the Canadiens trade to aquire Brian Bellows and who did they receive once he was trade away? ( 2 + 2 )

18 - What unique feat did Vincent Damphousse achieve in his first season as a Montreal Canadien? ( 3 )

20 - Matthew Barnaby nicknamed him Cornelius due to his likeness to the Planet Of The Apes character. ( 4 ) 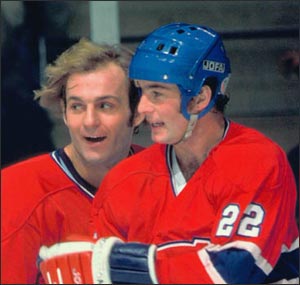 21 - In game 2 of the 1986 Stanley Cup finals, Brian Skrudland set a playoffs record with his goal 9 seconds into overtime. On the play, which linemate threw a pick on a Calgary Flames defenseman outside the blueline, to enable McPhee and Skrudland to break in 2 on 1? ( 4 )

26 - Which Canadiens player was fined $9,000 for instigation a brawl that found it way into the stands of the Boston Gardens? ( 3 )

27 - The Canadiens reaquired his rights from the L.A. Kings so he could essentially retire as a Montreal Canadien. ( 4 )

30 - What player did the Canadiens draft with the pick they received for Robert Picard? ( 4 ) 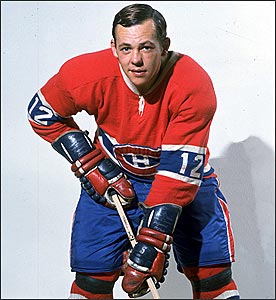 32 - What significance do Reggie Leach, Glenn Hall, and Roger Crozier have to Canadiens history? ( 2 )

33 - This player's overtime goal celebration launched a dreaded nickname. Who was the player and what was the moniker he came to despise? ( 2+2 )

36 - Irving Grundman, in a shrewd Pollock 101 mode, signed 3 former WHA players to ineligable NHL contracts to purposely exempt them from a waiver draft. Who were the three players? ( 2+2+2)

37 - In the book "Lions In Winter" by Goyens and Turowetz, an anonymous Canadiens player described a defenseman's up ice rush as the best "f*** you" play he's ever seen in hockey. Which defenseman was he speaking of? ( 3 )

38 - According to Scotty Bowman, which three Canadiens players offered by Sam Pollock had Red Wings GM Ned Harkness accepted in trade talks that would have allowed the Habs to choose Marcel Dionne 2nd overall in the 1971 draft? ( 2+2+2 ) 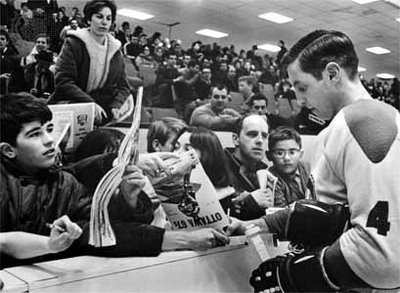 43 - Leafs coach Punch Imlach is reputed to have called him a Junior B goalie. ( 3 )

44 - The Canadiens failed to protect this player who went on to win the Calder Trophy the following season. ( 3 )

45 - He was the last Canadiens forward to win the Calder Trophy and record a 5 goal game in his career. ( 3 )

47 - This western bred hockey player once lifted Bobby Hull's jaw protector, to sock him a good one in the kisser. ( 3 )

48 - This player was known for knitting his own underwear between periods. ( 2 )

49 - Before the creation of the Conn Smythe Trophy for playoff MVP's, this Hab scored 10 goals and added 5 assists in 11 games to lead the Canadiens to the Cup. Who was this unsung hero? ( 4 ) 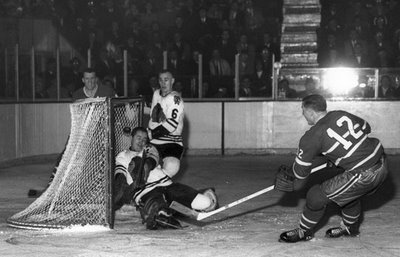 51 - While a member of the Canadiens organization, this goalie was loaned to the Bruins for one game, and promptly shut out the Habs in his NHL debut. ( 3 )

54 - This future Hall Of Famer gloved the puck into his own goal in overtime, costing the Canadiens the Stanley Cup. ( 3 )

58 - As the story goes, the Canadiens signed this youngster as he would not let anyone else play with the puck during training camp. ( 2 )

59 - Leafs coach and GM Punch Imalch once called him the greatest player he's ever coached. ( 3 ) 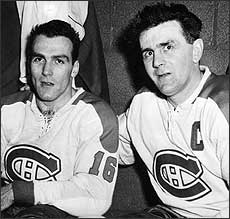 61 - During the 1944-45 season, Maurice Richard broke the record for goals scored in a season. Whose record did he break and how many goals did that player score? ( 2+1 )

62 - As the GM of the Maple Leafs at the time, Frank Selke aquired a future Hall Of Famer from the Canadiens without the stamp of approval from the Leafs Conn Smythe. The deal subsequently got Selke fired, thus freeing him to be hired by the Canadiens. Who were the players involved in the trade? ( 2+2 )

63 - Which Montreal Canadiens GM initially began the process of building a farm system to delevop prospects for the Habs. ( 3 )

65 - This well travelled Canadiens goalie would later be the victim of a 5 goal game courtesy of Maurice Rocket Richard. ( 3 )

66 - This player was recognized one year, for having only one minor penalty called against him all season. ( 2 )

67 - In 1941, the Canadiens essentially had two general managers. One was officially in the position, while the other went unlisted on all team related information. Who were they? ( 2+2 )

68 - He was the last Canadiens player to substitute for a goalie during a penalty. ( 3 )

70 - This player was the last to wear sweater number 9 for the Canadiens before Rocket Richard. ( 2 ) 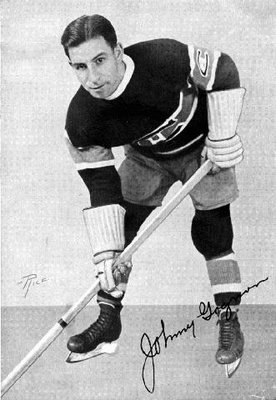 74 - Which Canadien was the first player in NHL history to be awarded a penalty shot? ( 2 )

76 - Which player completed the forward line anchored by Aurel Joliat and Howie Morenz? ( 2 )

77 - Savage, Lamb, and Mondou are all surnames from the post 1980 Canadiens. By curiosity, three players with these same names previously dressed for the Habs in the same season. What year was it, and what were their jersey numbers? ( 1+1+1+1)

78 - In a charity auction to benefit the family of the recently deceased Howie Morenz, a former Canadiens player paid $500 for his jersey. Who was the player and what did he do with the jersey? ( 2+2 )

79 - The Canadiens literally stole this player from the Maroons. Soon the Maroons would be history, and the minor league player they cast off to the Habs would help rewrite their history. Who was he? ( 2 )

81 - In the 1928-29 season, Canadiens goalie George Hainsworth appeared in all 44 games for the team. His won/loss record was 22-7-17 with a 0.92 GAA and an amazing NHL record of 22 shutouts. What particular facet of the game was not yet allowed in order for Hainsworth to post such stats? ( 1 )

83 - In 1927, Habs GM Leo Dandurand established the first two affiliate teams that fed players to the Canadiens. What were the teams names? ( 2 + 2 )

84 - Which two Canadiens were suspended and fined $200 by manager Leo Dandurand for beating up on the Senators Cy Denneny and Lionel Hitchman? ( 1+ 1 )

87 - The Canadiens aquired him by trading Newsy Lalonde to the Saskatoon Crescents. ( 1 )

88 - Who was the U.S. Olympic team goalie the Canadiens signed as Georges Vezina's successor? ( 2 ) 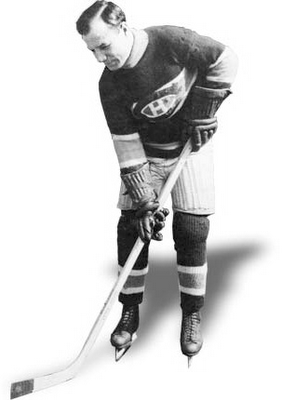 95 - During one season, the Canadiens crest was a stylized green maple leaf, with an old english "CA" lettering as an insert. What year was it? ( 2 )

96 - In order to entice Georges Vezina to play for the Canadiens, Habs manager Jack Laviolette had the goalie's brother play year long on the team's practice roster. What was his name? ( 2 )

99 - In the Montreal Canadiens second season, the son of the mayor of Sainte Hyacinthe wanted to be a Hab so badly, he offered to play for nothing. As the club had a $5,000 salary cap (imagine that!), they brought him on and he scored 12 goals in 16 games. What was his (ironic) name. ( 2 )

Best of luck to all!