Make It Or Break It Time

Share All sharing options for: Make It Or Break It Time 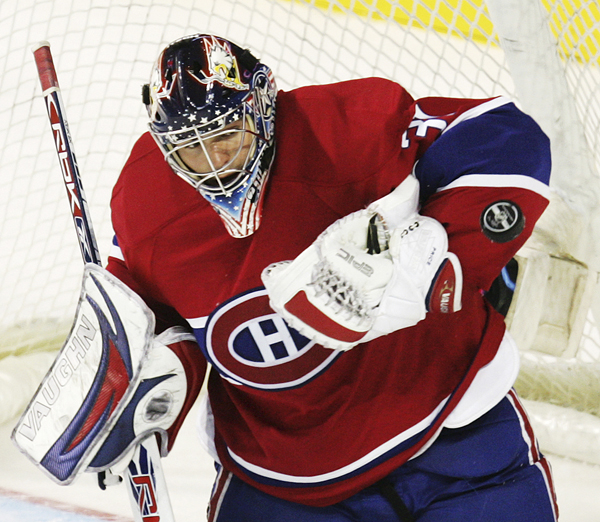 As the Canadiens prepare to meet the Ottawa Senators in tonight's final exhibition contest, it will be do or die time for several hopefuls attempting to make the 2007-08 Habs squad.

For certain players on the way up in the organization, it is unlikely that this game represents their last chance. For other players clinging to roles on the team, tonight's game could spell their final shot.

Of course, Canadiens management will have keen eyes set upon all players assumed to be on the bubble in this contest. Fates will be decided whether a particular player is playing tonight or not.

Having the Stanley Cup finalist Senators as an opponant represents a test of the highest order.

This game really ought to separate the men from the boys!

It will help the team determine how many plane tickets it needs to Hamilton.

I see the course of ten possible career paths being altered after this game. The players involved are:

Before analyzing each possible player scenario, let me just state that defenseman Josh Gorges is not amongst this group as he is a player the Canadiens KNOW will not clear waivers. He has performed adequately enough to be considered among the bets to remain with the big team. 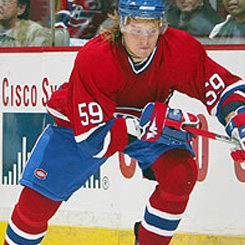 Differing quotes from coach Carbonneau and GM Gainey have so far conflicted in regards to Carey Price having an honest shot at making the team. So far, Price has done little to place himself off the squad, while Halak has been hot and cold in his outings. With Huet starting the Sens game, and Halak being given the third period of tonight's game, all I can foresee is that a brutal outing by Halak could give Price the upper hand.

This assessment is as difficult as reading minds.

No one talks of upside in regards to Bouillon, Dandeneault, and Brisebois - they are all talents who have peaked in what they can offer to the Canadiens this season. All three will be facing the Senators tonight, with Cube and Dandy as a third pair, while Brisebois gets a solid partner in Roman Hamrlik.

Given that Ryan O'Byrne, the player pushing them, is not playing tonight, the three will possibly be putting their jobs on the line in this game. The Senators are so far seen as the measuring stick in the Northeast division, and these three blueliners must give it all for a good showing to remain with the big club. Should either of the three perform less than satisfactory, their games will be compared against O'Byrne's outing versus the Bruins on Thursday.

The evaluation of O'Byrne in that game was both good and bad. Should veterans duplicate his rookie errors, the waiver wire will become their 24 home shortly.

Four forwards, all bringing a different games from one another are in a battle for two spots on the team. Those slots are seemingly filled by two players whom Habs management know their possible contribution - Maxim Lapierre and Garth Murray. Three of these players are tagged as fourth liners.

Mikhail Grabovski is the wild card. Blessed with the kind of speed that turns defensemen onto their heels, Grabovski is as fast as they come. His challenge at present is proving that he can do more than simply create scoring chances, he must begin to convert them. Grabovski has wowed all concerned without notching a single point in five exhibition games. Grabovski is not a fourth line candidate by any means.

It's put up or shut up time for him tonight. 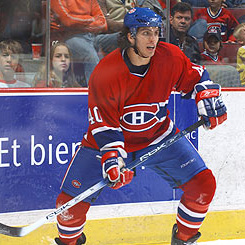 Kyle Chipchura has too many personal qualities and attributes to suggest he will never make the NHL. His future status is a given, but it is up to the Canadiens to determine whether that time is now, soon, or next season. Chipchura has shown he is capable at present against watered down training camp lineups, but has yet to face the real deal. He seems to be a compatible linemate for many, being he plays a safe game both ways. Don't be surprised if he is the one causing the cards to be shuffled.

Unfortunately, his fate might be dependant upon other's mistakes.

Garth Murray has done little to deserve still being in camp other than personifying a utility forward with fists. HIs defensive game offers variables, as in the past, he has shown effectiveness on both the wing and at center. He'll drop them gloves without striking much fear, and his best contribution hardly makes the Canadiens any tougher. He should have to exceed himself to avoid Hamilton.

He'll stick around only if three of the four forward candidates disappoint greatly.

Maxim Lapierre has been a camp disappointment, which comes as a surprise. Usually wiley and wired, he's been rather tame throughout exhibition games and he has a role on the team to lose. I don't see it happening, as he was a big game player when things were on the line in Montreal, as well as Hamilton last season. 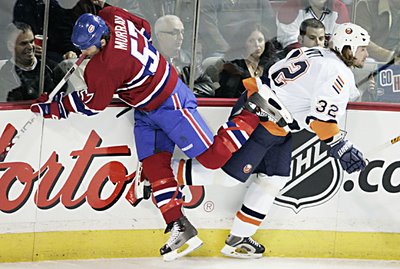 He'll get in some faces tonight and be a factor. Bet on it!

Overall, of the ten bubble players, five and possibly six could start the season wearing the CH.

Flip a coin over Price and Halak. I know my choice rests with the future being now.

I'd put Brisebois out to pasture watching tonight's game blindfolded.

I am willing to let Bouillon and O'Byrne decide that last spot on D tonight.

For the final tally, we'll just have to wait it out until the final cuts.