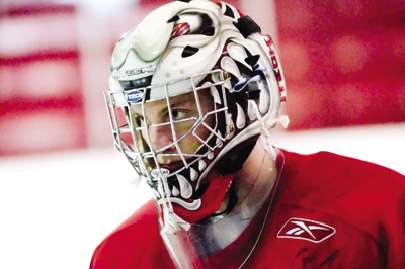 The Canadiens annual golf tournament and the start of the rookie camp tommorow can only mean that the real NHL season is finally upon us। Thank goodness for that - it's been too long of a bummer summer waiting to see what the 2007-08 Habs have to offer.

On Saturday, 27 possible future Habs will begin preparation for their upcoming seasons - wherever it may lead them. As prospects, many will be returned to junior, some will latch on at the AHL or ECHL levels, and a pair of lucky ones will gain a decent shot with the big time club.

Of the 27 names, 19 of them are Canadiens draft picks, 16 of which participated in the Canadiens summertime development camp.

Only Price, Chipchura, and O'Byrne have experience at the AHL pro level, having been integral pieces of the Hamilton Bulldogs Calder Cup run in the spring of 2007.

Not coincidentally, these three prospects are the odds on favorites to cling with the Canadiens come October.

Absent from the list are familiar names such as Mikhail Grabovski, Corey Locke, J.P. Cote, and Duncan Milroy, all players now considered as professionals who will be attending the Canadiens camp within two weeks time.

Loverock, who was also given an invite to the Habs development camp, is from the OHL's Mississauga Ice Dogs, while the other three hopefuls hail from the QMJHL.

Should his perfermances merit a contract, Loverock will be snapped up quickly as the Canadiens goaltending depth was subtracted two bodies with the departure of David ( I've got the pin - where's the grenade ) Aebischer and the left unsigned Christopher Heino - Linberg, who'd stayed in Europe the last three seasons.

By all accounts, Loverock appears to be one of many undrafted talents that for one reason or another slip between the cracks of the Entry Draft annually. 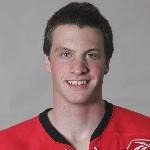 Browsing the net for the scoop on Loverock ( an NHL worthy name if there ever was one! ), info isn't hard to come by. Choice write ups and stats were common - like this one from the CHL website:

The Canadian Hockey League today announced that Andrew Loverock of the Mississauga IceDogs is the ADT CHL Goaltender of the Week for the week ending Sunday February 18, after posting a 3-0-0-0 record, along with a 1.33 goals against average, .962 save percentage and one shutout in three games. Loverock made 36 saves in a 4-1 win over the Owen Sound Attack on February 14. Two nights later, he turned aside 22 shots for his first shutout in a 5-0 win over the Brampton Battalion. He finished the week with 44 saves in a 6-3 win over the Ottawa 67's.

A commenter at a Mississauga Ice Dogs fan site, has this to say about the goalie:

Before the playoffs, everyone questioned whether goaltending would be Mississauga’s downfall in the playoffs. It’s just the opposite. Andrew Loverock has been phenomenal. Tuesday night’s game might have been a blowout for the Wolves had it not been for Loverock. And how about the second game in Mississauga Sunday night when he stopped 21 shots in the third period to preserve the 4-3 win?

The Niagara Falls Review featured a story on Loverock's disappointment at not being drafted, and the opportunity that the Habs development camp presented him:

Andrew Loverock is trying to make the best of a disappointing setback in his hockey career.

Despite a solid rookie campaign with the IceDogs, the 18-year-old netminder was passed over in the National Hockey League draft in June. "I was kind of expecting to be drafted," Loverock said Tuesday afternoon at Jack Gatecliff Arena before the team's scheduled two-hour workout. "For the first few days, I was disappointed. "Now I have to work harder to get a contract." IceDogs general manager Dave Brown was surprised Loverock was passed over.

"Did I think he would get drafted? Absolutely," Brown said. "Obviously, there were some things 30 teams didn't like." Through some hard work by his agent, Loverock was able to land a spot at a Montreal Canadiens' development camp in July where he was so impressive he was invited back to training camp.

"I learned a lot there", said Loverock, who was scheduled to leave for Montreal today, "It kind of opened the door. Now I know what it takes and what I have to work on. "I got a lot of feedback, which helped a lot. Loverock, a native of Phelpston, (about five minutes from Wasaga Beach), said he worked on his skating and positioning at the camp. Now he wants to build on that and make another good impression. "(I hope) they sign me to a contract, that what I'm looking at," said Loverock, who compiled a 31-13 record and 3.50 goals-against average for the IceDogs last season.

Niagara head coach Mario Cicchillo would like to see the Canadiens give Loverock a good, long look. "I hope he stays for two weeks to see the routine the other goalies are doing," Cicchillo said. "He'll see for himself what it takes to get to the next level." When Loverock returns to the IceDogs, he'll be the No. 1 netminder to start the season. With Lucas Lobsinger out until at least mid-October or early November while he recovers from knee surgery, Loverock is the man.

"I was the No. 1 at the end last year and it's kind of like you have to do it every night," Loverock said. "It's in your hands and you have to do everything you can." Rookie Adrian Volpe of Burlington, who was also in camp with the St. Catharines Falcons, will be the backup until Lobsinger returns. "When Lobsinger comes back, we'll reassess at that time and let them battle it out," Brown said.

"I find if there's someone pushing you, it's a lot better than if you state one guy is the No. 1 unequivocally." Loverock made the jump to the Ontario Hockey League after playing Tier 2 in Milton the previous season where he had an outstanding record, including a goals-against average under 2.00.

"There's a dramatic difference, but he handled it well," Brown said. "It's a learning process for these guys." Loverock, who Brown said appeared significantly different in his appearance after a summer of hard work, admitted there were many adjustments to make last season. "I never had a goalie coach in Milton," he said. "I worked on a lot of fundamentals. The league is a whole lot quicker and the skill level of the players is a lot better."

David Desharnais is another curious darkhorse invitation to the Canadiens rookie camp. His accomplishments bode well for his upside.

Desharnais has played three seasons with the QMJHL Chicoutimi Saguenéens, developing into a premier offensive talent in the league। In his rookie season, the Quebec City native played 70 games and scored 23 goals and 28 assists for 51 points, fourth on the Sagueneens.

In 2004-05, he scored 32 goals and added 65 helpers for 91 points, to finish second on the team. The center also showed a lot of passion for the game with everybody surrounding him, winning the Frank Selke Trophy for Sportsman of the league. He was named on the QMJHL second All-Star team. 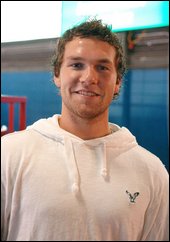 Desharnais' accomplishments didn’t stop there, as he once again was a prime offensive contributor in 2005-06. Scoring 33 goals and 85 assists for 118 points, he finished 5th in the league in scoring, with two of his linemates in the top 5. The Selke Trophy was his a second time and he added another second team All-Star selection on his resume.

While intriguing offensively, he is still small in today’s NHL standards, but that has never prevented players from skating in the big leagues। He has a strong instinct around the net and is excellent with the puck.

The young center likes to use his teammates in the best possible way but will never shy from shooting the puck. He has scored 65 goals in his last two years with Chicoutimi. Desharnais is also a good leader in and out of the rink. He was the Sagueneens captain last season and has always been able to gain the opponents respect.

Last season, he received an invite to the Ottawa Senators rookie camp. A follower of that camp has this to say about Deshanais stickout out:

I thought the best player on the Sens was David Desharnais, all 5'7" of him! He showed a lot of speed and heart; he didn't shy away from contact and initiated some of it himself. He scored the Sens only goal, by winning the battle for the rebound.

In a short interview with La Presse, Desharnais was quoted as saying that he will be "working hard in order to get noticed at the rookie camp, giving my all in hopes of filling a spot on the Bulldogs. I'm not aware if center if a hole to fill in Hamilton, but I'm looking to have a good camp. I believe my chances are good and I will be showing them what I am capable of."