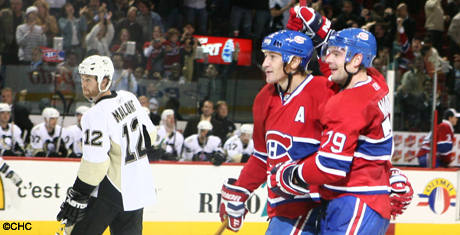 So the Canadiens number one ranked power play of last season has gone south.

It's not difficult to see that the Habs 2 for 33 PP stinks so far without the focal point that was Sheldon Souray's blistering drives.

Seeing this futility almost makes me re-evaluate the teams hopes.

What made the team so successful in this area last season wasn't Souray's shot in its entirety - it was the mere threat of it.

At one point in the early going of 2006-07, and carrying over from the previous season, there was a statistic that summed up the Canadiens powerplay better than the standard conversion ratio. It was that Souray had been on the ice for something like 30 consecutive powerplay goals.
The Souray threat was key element in the Habs overall success, much more than many were willing to admit.

Between Andrei Markov and Alex Kovalev, slick passers both, Souray had an option to each side if stuck. Furthermore, either side had Souray as an option. It was almost perfect!

What this threat did to teams defending a man down was force them to choose an option. They could attempt to knot up Souray and play him close, exposing themselves down low, or they could chance it and suffer the consequences.

Each option was a roll of the dice on a given night and was the prime reason the Canadiens were so successful in this department.

The Canadiens seem at a loss presently to replace the booming shot element missing from their attack.

The big problem now is that there is no one on the current Habs lineup that can inspire the same respect and fear when raising the stick to the sky when winding up.

It is as if the Habs have replaced a shotgun blast with a bunch of boy scouts with rubber bands! No one is shaking in fear!

In going 2 for 33 in 5 exhibition games, the Habs are converting at a rate of 6%, compared to last year when they were around the 20% range.

Point blank - if the Canadiens can't come up with a solition for this, they will be easy patsies for even the leagues weaker teams considering their 5 on 5 strength is equally dismal.

Are there any inner solutions to fill the point void?

None that I see at present. 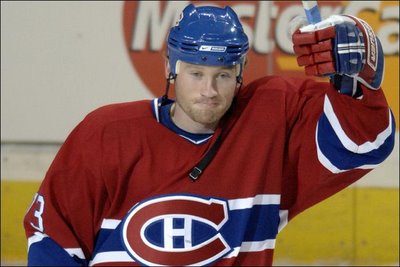 The best shooters on the team ply their trade from close in. Michael Ryder's quickness and accuracy are dependant upon his freedom in the slot. Kovalev's deceptiveness in shooting from the right side has all to do with moving defenders to the middle with a point pass option and opening an alleyway to the net.

Could Ryder or Kovalev play the point?

Next is no one. Chris Higgins and Saku Koivu have power play roles that require them to buzz the net and cycle the puck in converting opportunities. Forwards such as Andrei Kostitsyn and Tomas Plekanec are puck movers, plain and simple, and are not attuned to any other type of specialty given their respective games.

Of the remaining forwards or defenseman, none are suited to man the point and command it with any presence.

The Canadiens must find a way to work their power play with the cards they have been dealt.

There are three types of setups on the PP that work and Montreal is ill equiped in these options.

The first is the previously explained booming shot focal point.

The second is having an immovable object in front of the net. A player big enough to withstand an onslaught of hacks while being large enough to screen a goaltender and still convert what comes his way in scoring chances. Think Dany Heatley, Joe Nieuwendyk, Tim Kerr, Dave Andreychuk, and Phil Esposito - with players talented enough to feed them in tight traffic.

The last option is a group of five pinpoint puck movers, lightning fast and accurate enough to auger dizzied defenders into the ice.

Option one signed with Edmonton.

Option two is an equally rare breed. Two of the Habs larger forwrds able to fill such a role are Bryan Smolinski and Guillaume Latendresse. Neither are experienced in the role.

Option three offers the Canadiens something to work with. Skilled puck movers and an equal number of triggermen are all that we have to go with in the absense of a blue line threat.

So where does that leave the popgun Habs?

It leaves them throwing all of their assets into the third idea, which is akin to putting all one's eggs into one basket.

Beyond putting your most skilled passers out there with a triggerman or two, all the Canadiens can offer as an extension to this idea is to add a fourth forward, a defensively responsible one, to man the blue line and hope he isn't screwed over by tight coverage.

Otherwise it's back to working a set of standard plays to perfection within a semi capable group of able puck movers.

The trouble is, teams have the Canadiens sized up well when defending against what they can throw at teams. 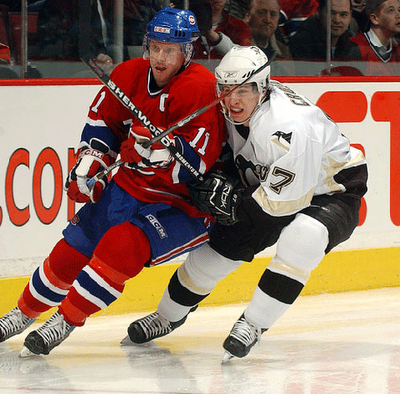 When I coached, my approach to killing penalties went something like this.

I drilled it into players heads that they were not playing 4 against 5, and convinced them until they saw it my way. Yes, there were 5 opposing players, but we still had 4 skaters and a goalie.

The oppositions extra man was in essense, at the far end of the rink tending goal where there was no threat.

The two forwards took care of the point should the puck be there, the defense nulified the wings.

If this smothering was persistant and forcefull enough, the puck would be battled for much more than it would be moved. The fifth forward was positioned in the slot for a shot that would either not be coming, or he would need to remove himself from a dangerous area in order to gather a pass that would keep play moving, thus eliminating himself as a threat in front of the net.

Should shots make their way through this web, I instructed my goalie to play up close and tight to the loose player high in the slot. If that player was solely intent on screening the goalie, the task became easier.

There was no box or square, small or wide to speak of. I positioned players in the form of a diamond - that is three curved base points with the top point being the puck pursuant.

It took extremely swift and talented players to beat this blanket - guys named Crosby, Thornton, Iginla, and Lecavalier, that we don't have.

From what I've witnessed so far, from last season's second PP unit to this season's effectives, this is how teams will be shutting down the Canadiens.

The glimmer of hope is that the Habs have a batch of talented forwards, pimpled and whiskerless, ready and eager to learn from trials and tribulations.

Even on paper it looks as though it won't be good enough for a good while.

Trotting through my head are thoughts of reaquiring Souray at a kings ransom, hoping he waves a no trade clause as an unhappy Oiler.

Yeah, yeah - dream on I hear my conscience say!

Going over the Habs options for power play proficiency, solitions are thinner even in dreams.

Adding all this up, I'm thinking the only person that can alter this predicament is named Bob Gainey.