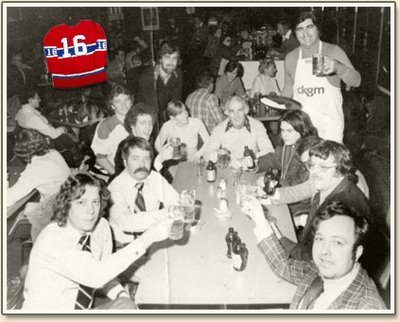 The idea of which I am about to speak of, as you already know of from the title, is Habs TV.
My point being - why isn't there one already?

In the city where hockey never sleeps, there's surely enough maniacal hockey nuts to keep such an idea afloat and thriving 24/7/365 - with a celebrated additional day every four years for Henri "Pocket Rocket" Richard's birthday on February 29.

Habs TV would also be a hit across Canada.

I mean if Leafs TV can continue to survive on such minimal content while shutting down between seasons, surely there is more than enough Montreal Canadiens content to make an idea like Habs TV thrive.

Can you imagine for one minute, the amount of content Habs / Canadiens TV could benefit from. It's just ridiculous!

Where do I begin?

For starters, any application for a TV channel needs CRTC approval as a specialty channel of interest to Canadiens as a whole. Now, the CRTC jumps on Canadian content like Hugh Hefner with a fistfull of Viagara on the Bunny of the Month, so one can assume they would be all ears at this idea.

Would they turn it down? Not after the idea and demand are made public - and a simple application for license would receive major ink. If you recall the fiasco of Shane Doan's appointment as Team Canada's captain last fall, and how something without a thread of substance ( Doan was innocent as a nun! ) made it's way to Parliament, imagine the outcry if Habs TV was given a thumbs down with Leafs TV continuing to exist.

I don't even want to go there!

Suffice to say that if the Habs TV presention to the CRTC has interest and merit, it's a slam dunk! Dates on calendars will be circled to mark its on air date.

This TV station would spawn jealousy with its content capabilities and choices. Endless, is the word that comes to mind.

Allow me to play station programmer for Habs TV, if you will, and present you daily, weekly and monthly content lineup ideas.

First, let me state that Habs TV would be a bilingual station that accents the present goings on, but equally focuses on the past seasons. Peeks into the future of the team would also be featured, and this aspect would become more prominant during the off season.

Secondly, with 100 years of history to draw from, half hour and 60 minute shows with hosts and narrators would need to be created in order to properly spread out every year of the teams existance over a 12 month period.

Experts on the Canadiens are crawling the streets - Hello Liam Maguire! 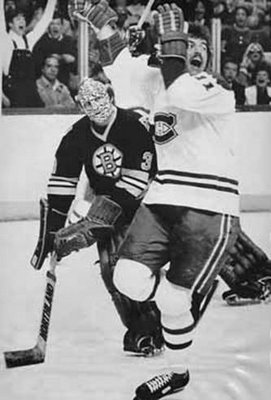 Furthermore, seeing as how 24 Stanley Cups divides so neatly in a 12 month calendar, every month could feature 2 Stanley Cup winners chronologically, starting in 1916 when Goldie Prodgers put the pre - NHL Canadiens on the silver mug for the first time, until 1993, when Patrick Roy's overtime exploits became an NHL legend.

The stories of 24 Stanley's are only the beginning. The players are the continuum of those featured years each month. Former players could be brought on to talk about their era's with the Canadiens, and give opinions about today's team also.

There could be endless players profiled, interviewed, and looked back upon. The same treatment would apply to the present and future players. Each day, the channel could profile one former Hab player from the past, one current roster player, and one player from the Hamilton Bulldogs or even a drafted prospect.

In regards to that latter notion, each numbered day of the month could align itself with a jersey number. For example, if the channel were to begin by featuring the 1916 Stanley Cup champions in January, then the 1st of the month would have a feature on Georges Vezina, the 4th would highlight Edouard "Newsy" Lalonde, the 7th would profile Howie Morenz, and so on. August would see the 1971 Habs team, with Ken Dryden getting his day on the 29th. Beyond 1979, higher numbers would require deviations from this notion, but you get the idea.

Their could be a daily trivia challenge where the winner bags a new Habs jersey!

Educational, it would be!

Of course, games would fill up much of the 24 hour time slot, and hey, ain't it a coincidence that there are 24 Stanley Cup wins to feature. Now without footage of earlier championships, balance and airtime for each of the Cup winners would be an issue, but an hourly nod in reverance in a five minute frame is more than possible.

Current games will draw big time interest, to say the least. Rebroadcasting them, and the legal rights incurred may complicate television contracts with other stations, but it's not unreasonable to think that there would be a way for Habs TV to show a recent game, within a couple of days delay.

The could also do pre-game shows that coincide with the live broadcasts on other networks. This idea would work even better for the post game shows, as Habs fan would stick around for the win or loss to be disected by astute hockey thinkers of which the Canadiens have plenty.

On game night, they could offer a retro game from any given year, there are hundreds to choose from.

The channel could show Bulldogs games, and perhaps even the odd U.S. college game featuring Habs prospects. Junior games are a possibility as well.

There could be a GM of the week feature. A defenseman of the day/ week feature. A goalies look back in time focus. Award winners of the past being highlighted. An unsung heroes study. A coach's POV examination, revolving around the past, present and future. There could be Habs scout agenda's checkmarked. They could revisit Entry Drafts and previous trade deadline dates all focusing of what the Habs did that year.

Filling in the programming gaps, radio talks show hosts could go live, bringing current events to the screen on a daily basis. Call in shows would thrive.

They could show the Rocket movie on Friday nights every other month.

Truthfully, my ideas only touch upon a fragment of what could be offered to viewers.

All summed up, what Habs TV could offer, is endless in content, and impassioned in possible viewing options. What Habs nut wouldn't want this channel.

Is there anyboby alive out there to make this a reality?